Four 'pop ups' in line for the mall 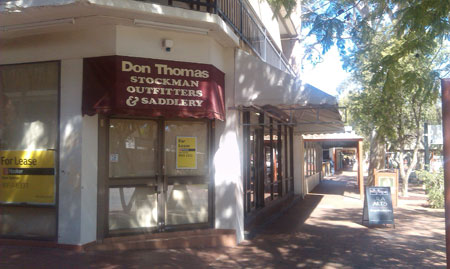 Four of Todd Mall’s vacant premises will be brought back to life by pop up ventures during the Alice Desert Festival and Desert Mob.

Three will host exhibitions, but the fourth will be a shop, the “Full stop. Pop shop”: “11 days of ceramics, sandstone, chocolate and cloth” is the sales pitch, with the wares all crafted by local makers.

It will be great for the six of them, all women, all mothers of young children, bringing greater visibility, new audiences and potential customers to their practice, and importantly it will be a step in the right direction around revitalising the mall. This effort should always have been at least as much about people and activity as about the recent bricks and mortar investment.

“What’s happened in the mall is not specific to Alice Springs,” says one of the group, designer Elliat Rich. “It’s happening across Australia, in big towns and small. But here we have an advantage, amazing creative capital. We can put this towards new solutions.” 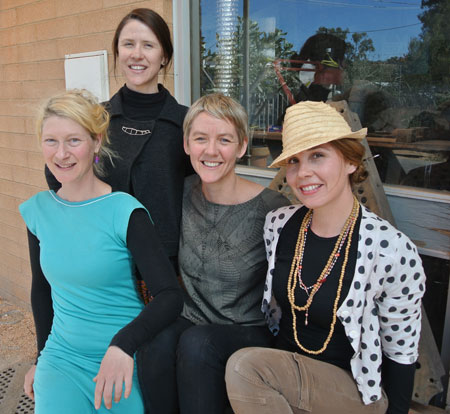 The six took a proposal to the town council and have been pleased with the response: the council liaised with the real estate agents, helping them gain access to the premises of the former Don Thomas Saddlery (above), and have offered to cover public liability.

It’s a model that could inspire others, says Sarah Holder, the maker behind the “chocolate” in the billing: her biscuits are said to be “architectural” in appearance and “amazingly delicious”.

“The way people shop has changed,” says Holder. “They get more excited by a short-term shop, the limited time to enjoy the experience helps draw them in. And in Alice Springs, unique and beautiful as it is, people also want a taste of the big city. A pop up is a good example of that.”

The group are also focussed on telling local stories through their work.

“We want to showcase central Australia,” says Charmaine Kik, who is up-cycling clothing collected on her travels, with each piece accompanied by a story that belongs to it. “We live here, it’s our town, and what we make is influenced by that.”

“And we want to send a positive message about the town, we love living here,” says Holder. “By adding vibrancy to the mall, making it more lived in, it will be a happier and safer place.”

At present the shop windows are under wraps. The group are working to create an atmosphere inside but one that is in keeping with the temporary nature of their venture.

“You’ll still be able to see that it’s a vacant space,” says Kik.

So the aesthetic will be simple and, importantly, created without waste.

The shop will open in the evening (5-9) of 27 August, when the night markets will also be on, and thereafter from 10am-6pm until 6 September.

Rich will be showing a new sandstone range by Elbowrkshp, the design studio she runs in collaboration with bespoke shoemaker James Young. For the sandstone range they have collaborated in turn with local stonemason Tim Newland.

Robson will be offering mostly functional home ware, beakers, mugs, vases, plates, some in porcelain, some in stoneware and even some from local clay: three to four ranges, one of which is new. There will also be some sculptural pieces, and from time to time she will demonstrate throwing and hand-building with clay on site. (Robson’s refined ceramic skills have previously been on display in the exhibition Ghost Gums, a collaboration with Rich.)

Two other makers are part of the group: Kirsty Robertson and Anna Satharasinghe. Robertson uses fabric from a collection gathered over years to make unique bags and satchels. Satharasinghe turns her hand in many directions – printed textiles as wearable pieces and home wares, leather jewellery, bedding, wall weavings. And she too will be demonstrating her craft with a small loom on site.

The timing of the ‘Full stop. Pop shop’ with three other short-term ventures in the mall will hopefully give impetus to a local pop up movement. Of the three, two are piggy-backing on Desert Mob. One is the Desart Art Workers Photography Prize, which will be shown in a shop in Reg Harris Lane; the other is a show of 10 local artists presented by curator Liesl Rockchild, in the former lingerie shop nears Sporties. The third is an exhibition, Maximo of Mparntwe, by photographer Mike Gillam which will be staged as part of the Alice Desert Festival and will be installed in the former Mall Medical premises.