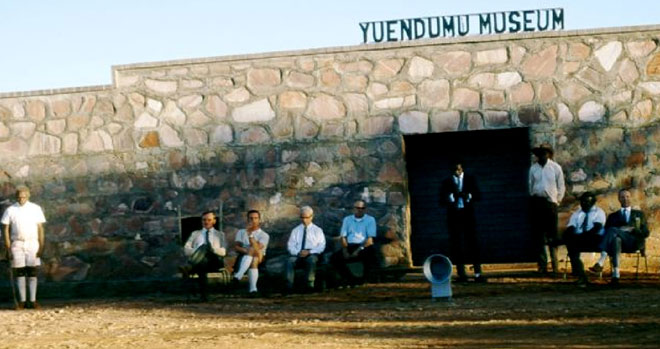 The Warlpiri moment of 1971: dignitaries at the official opening of the Yuendumu Men’s Museum on 31 July. This and other historic photographs below supplied by Warlukurlangu Artists.

Early in September at Yuendumu – the community on Warlpiri lands some 300 kms north-west of Alice – a new chapter on the beginnings of the contemporary Western Desert art movement will be written.

Reclaimed from obscurity, the Yuendumu Men’s Museum will once again open its doors. Inside, a priceless treasure of cultural heritage, murals created by the community’s Old Men in the weeks, possibly months ahead of 31 July 1971. That was the date of the museum’s official opening, attended by dignitaries including Harry Giese, Director of Welfare in the NT Administration and member of the NT Legislative Council.

The murals represent key Dreaming stories of the different Warlpiri ‘skin groups’, imagery from the sacred caves across their lands that with white settlement had become increasingly hard to access.

“Instead of Old Men taking their young fellas out there and showing them the paintings and the stories associated with that particular place, they decided to build a museum,” says Harry Jakamarra Nelson, speaking together with Thomas Jangala Rice to the Alice Springs News Online.

The two (pictured below right) were young men at the time of the opening, and had camped close by the museum in the two weeks prior – “to give the old fellas a hand, transport, firewood,” says Jakamarra. On the day, Jangala joined his elders in the dancing – “a proper cultural regatta”, says Jakamarra. He didn’t dance: “I was MC, master of ceremonies.” He laughs, twisting his hand at his throat and making a strangulated noise: “I was in a suit.”

Jangala draws in the sand, showing parallel lines converging in four directions towards a central square. He speaks in Warlpiri to Jakamarra who translates: “What Thomas is saying, people from the east, north, south and west all came together here and talked a lot about establishing the museum. Long before the museum was built they talked about it quite a lot. Proper consultation, the different groups, the different moieties, you might use that term in some white man’s language.”

The date of the opening makes clear that the painting of the murals had begun at the same time, possibly even before the famous Honey Ant murals on the external walls of the school at Papunya, the event celebrated as the founding moment of the contemporary Western Desert art movement. Geoffrey Bardon, the school teacher who famously encouraged their creation, documented their progress over the months of June to August 1971. At Yuendumu the work was complete by 31 July.

It’s not a matter of challenging the place of honour accorded to what happened at Papunya, rather a case of recognising that something of profound cultural import was happening at Yuendumu at the same time, making the foundation story of contemporary Western Desert art richer and deeper. And our great good fortune is that the Yuendumu murals remain intact, while those at Papunya sadly, almost unforgivably, were painted over at the order of some unthinking bureaucrat.

The undertaking in the two communities was of a different nature, however. At Papunya the murals were for public viewing, whereas at Yuendumu, with no non-Aboriginal involvement, they were secret-sacred, and access to the museum was then highly restricted. Not only were sacred cave paintings reproduced, but sacred objects too were transferred to the museum, most of them kept locked away in cabinets to be shown only to the right people during ceremony. The layout of the museum oriented the murals and the cabinets with their precious contents to the country from whence they came.

“For a brief period, it was the most coherent museum presentation of Aboriginal culture in existence, and no museum today could emulate it,” says Philip Jones, historian and curator at the South Australian Museum (SAM). Following on from his account of the Yuendumu Doors, which are now in safekeeping at the SAM, Jones has written a book about the Men’s Museum, to be launched at its re-opening in the community on September 6.

The murals are “unique in the canon of Australian art”, says Jones. “Aboriginal artists took the opportunity on their own terms, in their own space and time, with no white person looking over their shoulder, to produce a coherent set of paintings reflecting the art of their country.”

How can such a significant historical event have been forgotten for so long?

Although its secret-sacred contents restricted access, from the start the Old Men had the idea of the museum also being a showcase for their culture. Non-Aboriginal men and even older non-Aboriginal women were allowed entry on payment of a fee. 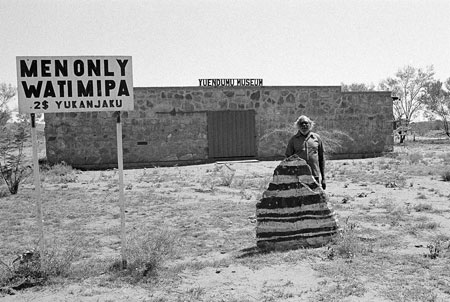 The late Darby Jampijinpa Ross (pictured at left) had been employed by the SAM in the 1960s in a curatorial role, advising on its collection of Warlpiri artefacts. He had painted one of the murals in the Yuendumu museum and became its curator.

Jampijinpa was already in his mid-seventies, however. Jones suggests that to keep the museum open two to three younger men would have been needed as well as a steady stream of visitors. As Jampijinpa grew more frail, security was breached. Once the other Old Men became aware that their objects were no longer safe, they removed them. They took them back out to country, says Jakamarra, or to safekeeping in places around Yuendumu, to be retrieved only for ceremony. Soon the building fell into disrepair, the electricity was cut off, and the murals remained in darkness. Jones visited the building in the late 1980s and was completely unaware of them.

There was also a hiatus between the creation of the museum and the development in Yuendumu of painting on canvas to send to market. At Papunya it was possibly the very insecurity of their murals that contributed to the flourishing of painting on small boards, then canvas that was soon to so thrill the outside world. In Yuendumu the Old Men did not set up their artists’ association, Warlukurlangu, until 1985. The year before, they had painted the doors at the Yuendumu school: this too, suggests Jones, served to keep the astonishing fact of the murals in the shadows.

Fast forward to late 2006. Warlukurlangu Artists had become the largest Aboriginal art centre in the desert, with some 400 artists on its books, and turnover from art sales had reached $1.5m (the next year it jumped to more than $2m). Artists had been contributing some of their profits to infrastructure developments within the community, capably overseen by the centre’s manager and assistant manager, Cecilia Alfonso and Gloria Morales. At a board meeting in October there was discussion about future projects. Reopening the Men’s Museum won the board’s support. Alfonso and Morales took it on with gusto, obtaining substantial funds for renovation of the building and restoration of the murals. They employed Catherine Millikan of the National Gallery of Victoria to undertake the conservation, meticulously following the Burra Charter process.

As the project neared completion a three-panelled ground painting (above) was commissioned for the building’s central space. The ground painting made back in 1971 on the then dirt floor had long since vanished. The new work uses the traditional technique of motifs rendered in plant fibre and natural ochres. Jakamarra explains that “Old People” made it: “This is shared, not for personal use, used by groups.” It represents Yurrampi (Honey Ant), Janganpa (Desert Possum) and Ngapa (Water) Dreamings, each associated with sites in and around Yuendumu and belonging to, respectively, Japanangka and Japangardi sub-sections (or ‘skin groups’); Japaljarri and Jungurrayi; and, Jampijinpa, Jangala, Jakamarra, and Jupurrula.

The building itself – for which the Warlpiri raised half the funds and on which they laboured – is simple yet beautifully proportioned, with the aura of a place of worship. Its basic fabric has stood the test of time well. The roof has been replaced and some modifications made to allow daylight in. Never again will the murals languish in darkness.

Light now streams in from a recessed skylight, falling on the local red stone of the winged rear wall, radiating a warm glow into the central space. The murals, in natural pigments, are on the walls to either side, rising from the floor to a row of high windows, and covering the low walls that separate the side-aisles from the central space. Standing in one of the aisles, painted termite mounds have also amazingly survived. “They have meanings too, these mounds, ant beds,” says Jakamarra but he leaves it at that.

More than four decades have passed since the museum was first opened. While much of Warlpiri life has endured, much has also changed. As the project to restore the museum got underway, the Old Men formed a committee to oversee it and agreed that former restrictions on entry should be lifted.

For the celebration on September 6, also marking the thirtieth anniversary of Warlukurlangu Artists, people from all over Australia have been invited.

“White people will stand at the side,” Jakamarra says, “watch the ceremony going on. They, white people who live here, are part of us as well, they can take part, not in the actual ceremonies, but in the occasion.”

What about going inside?

“We will be going inside, yeah. All they’ll see is just the murals on the wall, ground paintings, similar to the ones they see once a year when we perform young men’s ceremony. Cannot be talked about or photographs taken.”

An experience to live, and after decades of forgetting, to remember.

Above: Painted up for the “proper cultural regatta”, Warlpiri men arriving at the museum on 31 July 1971.

Below: The restored museum at dusk. Photograph by Greg Weight, courtesy Warlukurlangu Artists.

Note: Kieran Finnane has contributed an essay on the museum to Sturgeon magazine, published by Artbank and due out in late August.