In trouble? Time to dust off Statehood. 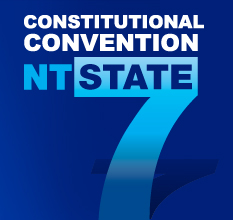 Whenever things go pear shaped the government comes up with something that nobody really understands but that gives everyone a warm feeling in the tummy.

This morning Mr Hockey was being chastised for this by Kezia Purick MLA, who’s just become a backbencher. The only thing they have in common is that they are conservatives, roughly on the same take-home pay.

Mr Hockey is not reported as losing any sleep – although maybe he should be, given that he’s paying about 85% of our bills.

The comparative figure for the states is about 50%. So where are we in the grand scheme of things?

The debt is half of our Budget which, by European standards, isn’t too bad, says Rolf Gerritsen, the CDU’s research professor in Alice Springs.

But it’s not so good by Australian standards where we’re occupying the bottom of the barrel, in company with our southern neighbor, South Australia. It has still not recovered from the collapse of its state bank, says Prof Gerritsen.

The fact that in the Northern Territory the contribution to the Gross Domestic Product by private enterprise is a laughable 15% is something people pondering statehood may like to bear in mind. In the states the number is three times that.

Prof Gerritsen says for the GDP bottom line, it doesn’t matter whether the dollars are contributed by someone making ball bearings or someone pushing a pen in a government office.

When the bean counters (Commonwealth Grants Commission) catch up with the drop of income from coal and iron ore – they’re usually two years behind, says Prof Gerritsen – WA will get 29c for every dollar they generate in GST revenue. We Territorians will get $5.50. Thank you very much.

But, he says, money isn’t an argument either way for statehood: We would continue to need massive Federal funding.

Remember when last the Alice boomed? It was during the 2007-10 Intervention, with Commonwealth money pouring into the NT.

The currently best state finances are in Tasmania – they have a real budget surplus. So how come they have cheap houses and ours are just on a slow decline from dizzying heights? Go figure.

Prof Gerritsen recalls Peter Walsh, Labor politician from 1974 to 1993 and the Hawke Government  Finance Minister, who calculated that at the then current rate of funding increases, the Territory would be gobbling up the entire Commonwealth Budget by the year 2400.