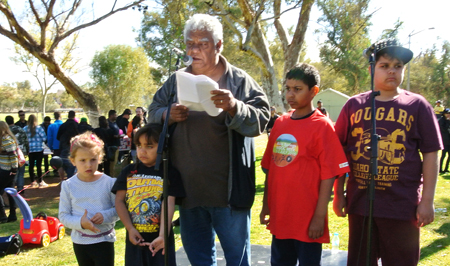 An impassioned plea for the protection of children was the message of prominent Aboriginal spokesman William Tilmouth at the NAIDOC march and gathering this morning.

Flanked by six grandchildren on the bank of the Todd, after a march down Todd Mall, he  told a crowd of about 250 that too many children are exposed to alcohol and violence in their homes, and are being damaged by seeing their parents fighting.

If children need to be removed then they should go to carefully selected kinship care, or foster care in Aboriginal families, so that Aboriginal tradition can survive through the young people of today. We need them to “learn and pass on our rich culture”.

Even brief daily interventions can make a difference, and preschool attendance is vital.

He said help from men in this effort is crucial: “They need to play a role.”

Angry Aboriginal men can be very threatening, and many finish up in overcrowded jails: “It’s not much of a Territory lifestyle to be behind bars,” he said, and there is nothing tough about being powerless in a prison. “You never get back your years in jail.”

It’s men who can stop the abuse, the domestic violence, the abuse of children.

“Love does not give you power as the man of the house.” 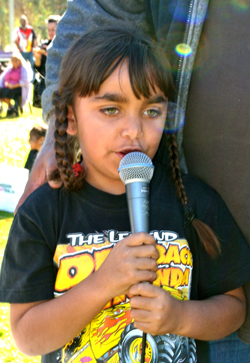 Mr Tilmouth deplored the lack of progress in Aboriginal affairs, going down hill from the time the handful of sand had been given to “that old man” in Lajamanu: Rights had been whittled away in the “control of land, where we live, even our income. All that’s left is our right to remain silent”.

At the end of Mr Tilmouth’s speech, his granddaughter Anthea Tilmouth took the microphone and said: “Help families.”

Earlier in the rally Sheralee Fitz and Chansey Paech said Alice Springs, on this NAIDOC Day, is celebrating the 30th anniversary of Ayers Rock being handed back to Anangu, while the celebration’s national theme is “We all stand on sacred ground.” 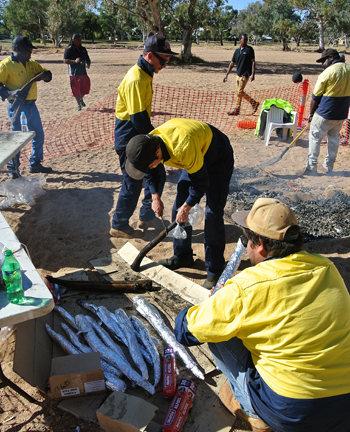 PHOTOS from top: Mr Tilmouth with grandchildren • the march down the mall • Anthea Tilmouth • a BBQ with a difference: kangaroo tail.