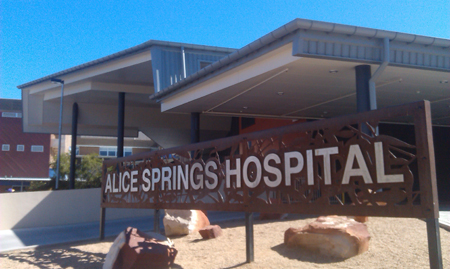 NT Health, the biggest employer in Alice Springs, is giving preference in recruitment to Aboriginal applicants whenever they are “suitable to perform the duties at a level appropriate for the position”.

“The review process includes internal review by your HR unit, then formal review by the Office of the Commissioner for Public Employment, Public Sector Appeals and Grievance Review unit.

This seems to exceed the NT Government’s previously stated employment quota objectives as, in theory, non-Indigenous people could be completely kept out of jobs.

The Aboriginal and Torres Strait Islander people covered by the policy, which came into force in January this year for two years, are referred to as “Special Measures” applicants.

The scheme is understood to be active across all NT Government departments.

The memo says: “This arrangement will apply to all advertised vacancies and to Entry Level Recruitment. If a vacancy is posted on the NTG vacancies website, Special Measures applies.”

“An applicant selected under Special Measures will be required to provide evidence of their eligibility prior to commencement, such as a completed Statutory Declaration form or a supporting statement from an appropriate Aboriginal organisation.”

The following statement was provided by a spokesman for the Department of the Chief Minister:

A Special Measure is a plan, program or arrangement designed to promote equal employment opportunity (EEO) for a group of people who have not yet achieved employment equality. Also known as “affirmative action”, essentially, a special measure is a form of more favourable treatment of certain EEO groups, such as Persons with a Disability, or Aboriginal and Torres Strait Islander persons (Aboriginal).

Special Measures Recruitment is at the discretion of each Agency to decide if they wish to implement, and is approved by the Commissioner for Public Employment. Agencies have implemented such plans to support increased workplace diversity and to address inequality of employment opportunity.

Currently, 15 out of 33  agencies have applied for Special Measures Recruitment.

Special Measures have been in place for a long time in the NTPS under Designated Positions, where the Agency specifically designates a vacancy for a person from an EEO group and it cannot be filled by any person from outside that group.

From January this year, Priority Consideration and Preference in Selection, has been implemented under which applicants from the EEO target group will be considered first before all other applicants, and given preference in selection if they meet all the criteria and are suitable at level.

Recruitment numbers under Priority Consideration and Preference in Selection are not available as they are held by individual agencies subscribing to the Special Measures Recruitment. Only unsuccessful applicants from one of the two EEO groups who are found not suitable are submitted to OCPE to be reviewed.

Agency figures will be available once collated by agencies for Annual Report data.