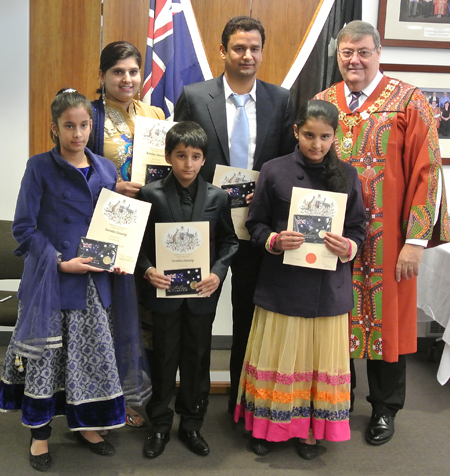 The chant got more boisterous each time town council CEO Rex Mooney led off on it, and by 10am this morning Australia had 58 new citizens, inducted one by one by Mayor Damien Ryan who told them they’re getting an extra bonus: Today is Territory Day as well.

He’s done 140 conferrals so far this year, and there are two more citizenship ceremonies to go. Last year he presented 400 certificates to brand new Aussies.

This morning’s candidates came from 16 countries. Some were in business suits, some in casual dress, some in the colorful costumes of their countries of origin. About a dozen children were amongst them.

Afterwards, over tea and scones, they said they had come to Alice Springs because it is not a big city, has a friendly community and excellent work opportunities.

Being a “multicultural place” is what brought nurse Jinu Cherian (top of page, front row, at left) from India to Alice Springs, “plus better opportunities”.

Ephraim Tinashe Chivhoko (second from left), from Zimbabwe, came here because Alice “is different from the rest of Australia”.

He says: “The lifestyle is better than in the bigger cities. Before I came here I lived on the Gold Coast, and I moved here because of job opportunities.

“I work in the hospital as a registered nurse.”

“I like the people, I like the country,” says Muhammad Amin Aziz Khan, who came from a country area in Pakistan –  “same as Alice Springs. I love this place. There are not many people.”

He’s been a youth worker in the Laramba community, 200 km north-west of Alice Springs, for three years.

He works in an IGA supermarket, and Shveta as an operational manager in Lil’Antz child care.

The family comes from the Punjab in Northern India.