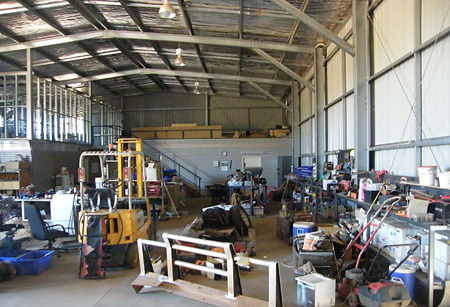 The bitter neighbourhood dispute about a shed in the farm area has been dealt with by the Development Consent Authority in a way that seems likely to result in ongoing friction.

The ruling is well short of assertively dealing with “significant issues of non-compliance,” as authority chairman and former Chief Minister Denis Burke himself has described the current situation in rural residential areas.

Objectors to the changes on the two hectare block in Petrick Road outnumbered supporters 37 to five.

One issue is the storage area: The Planning Scheme allows “Home Based Contracting” on a maximum of 200 square meters.

Storage, subject to a more specific approval yet to be given, is now permitted on that block to “be contained primarily within the existing shed (vehicles excepted)”.

What “primarily” means is not defined.

The shed measures 400 square meters. The applicants, Stephen Zanca and Lily Tan, had submitted a drawing showing 224 square metres of intended storage space for materials, and 100 square meters for vehicles, inside the shed.

The DCA has doubled the number of permitted vehicles from three to six “not including worker vehicles left at the property while on contract jobs”. No limit is given for the number of workers’ vehicles.

Ms Tan told the meeting that accommodation in the shed would be for relatives from overseas. But once the the accommodation exists, what guarantee is there that others, such as employees, will not also be staying there?

In any case, DCA member Stave Brown said the dwellings could not be used without firewalls which are not currently part of the structure.

The shed also includes offices. It appears none of these facilities have received building approval.

The DCA says to the applicants: “This development permit does not grant building approval for the structures and associated use and you are advised to contact a registered building certifier to ensure that you have attained all necessary approvals before commencing further construction works.”

These “further construction works” seem likely to open a Pandora’s box: Plans for modification of the shed submitted with the application show two offices (already in place), a toilet, laundry and shower downstairs and two bedrooms, each with a bathroom, and a “guest storage area” upstairs.

Approval of these facilities would clearly change the structure’s character from “shed” – for which, absurdly, there is no size limit under Planning Scheme – to “independent unit,” formerly known as granny flat.

Unless a specific exemption is given, the Planning Scheme permits only one independent unit per block and limits it to 80 square meters – one fifth of the size of the existing “shed”.

It is clear that any building approval for this would be in conflict with the Planning Scheme.

This has been pointed out to the DCA which would no doubt need to step in if an improper building approval is given.

The DCA has now ruled the proposed activities on the block to be consistent with the land use definitions of “Home Based Contracting” and “Home Occupation”.

A provision in the Planning Scheme says a business for which Home Based Contracting has been given permission must not be “operated from the subject land”.

Yet that is exactly what Ms Tan and Mr Zanca have said in their application they would be doing.

This has also been pointed out to the DCA but it has clearly chosen to ignore it.

The DCA permit stipulates activities on the land must “not involve any form of industrial activity, i.e. no operation of machinery or the processing of goods or materials on site”.

This will no doubt be welcomed by neighbours who have complained about, and provided evidence of, manufacturing noises in the past.

The Planning Scheme mandates that Home Based Contracting and Home Occupation must not impact “on the residential amenity of adjoining and nearby property”.

The permit given to Ms Tan and Mr Zanca stipulates: “The use and development must be managed so that the amenity of the area is not detrimentally affected, through the transport of vehicles, materials, goods or commodities to or from the land; appearance of any structure, works or materials, and emission of noise, artificial lights, vibration, smell, fumes, smoke, vapour, steam, soot, ash, dust, water, waste products, grit or oil.”

But to this is added the rider “to the satisfaction of the consent authority” without also saying that the DCA, as the arbiter, would be taking into account the views of “adjoining and nearby residents”.

The permit says loading and unloading of vehicles, equipment and materials related to the Home Based Contracting is restricted to between 7am and 7pm Mondays to Saturday and 9am to 6pm Sundays and public holidays.

The DCA mandates no limit to the number of such traffic movements in that quiet residential area.

The Alice Springs News Online has invited the DCA to comment.

PHOTO: The inside of the controversial shed, pictured in the DCA’s meeting agenda.

Declaration of interest: The writer lives in the neighbourhood of the land in question, and has made a submission to the DCA, objecting to the application.