Out of the shadows of showbiz 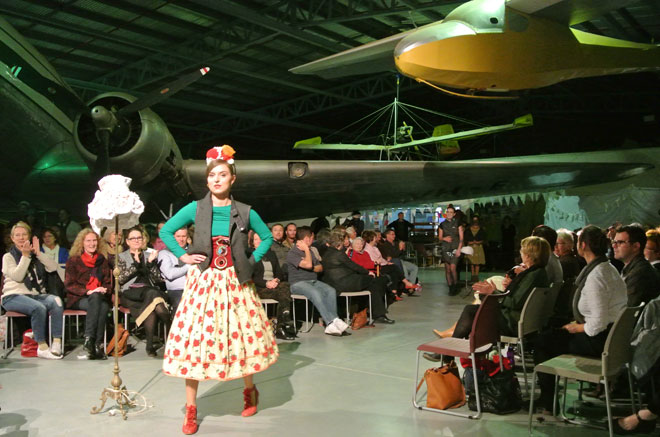 Above: A collaboration by Sustainable Couture veterans Simone Guascoine and Sarah Hill, featuring a 1950s-style gypsy dress, fashioned from a doonah cover, in the inimitable setting of the Central Australian Aviation Museum. 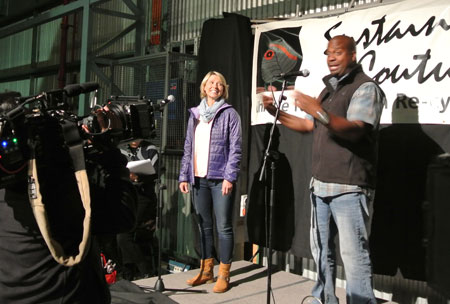 Even high-powered USA showbiz could not steal the limelight at last night’s Sustainable Couture – the ‘fashion parade’ dedicated to “the endless possibilities of recycling”, now in its seventh year.

The audience couldn’t have been more receptive to the American guests – clapping, cheering, gasping with each joke and revelation by 50/50 presenters Samantha Brown and Chris Grundy (at right) from the Travel Channel. Their show gives a man and a woman the chance of 50 hours of adventure costing $50,000 if they’re willing to drop everything at ten minutes’ notice. The lucky pair in this instance were Peter and Tiffany (at left in photo below), who chose the Australian Outback over Abu Dhabi (much patriotic cheering), and last night chose Sustainable Couture over learning to play a didgeridu. 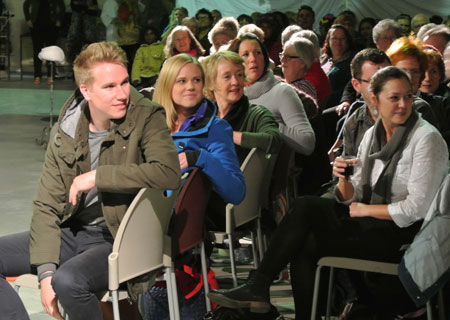 “We left out one little thing though, “ said Samantha, “they are going to be in the fashion show!”

Cast and crew then disappeared backstage in preparation, while the true business of the evening got underway. The publicity is priceless, of course, not only for Sustainable Couture, for Alice too, but there is an open-hearted, nurturing enthusiasm and embrace of ideals in the Sustainable Couture circle that hopefully never gets lost to commercial razzamatazz.

The founding and long-time participants in the event have high-level skills and flair, yet they always welcome newcomers. There were three interstate designers and a young first-timer in last night’s show, taking the total to 11, possibly the highest number to date. The theme was “Out of the Shadows” – interpreted as broadly, diversely, poetically as you might expect.

Once again the event was staged in the Aviation Museum, and that won’t change anytime soon – what better than “real runways, real planes”, as MC for the night, Jane Lloyd, noted.  The gleaming large sculptural forms of the planes provide an excellent backdrop to the show’s fine detail and softness of fabric and flesh. Our photos below show some of the highlights, including the return of Peter and Tiffany. – Kieran Finnane 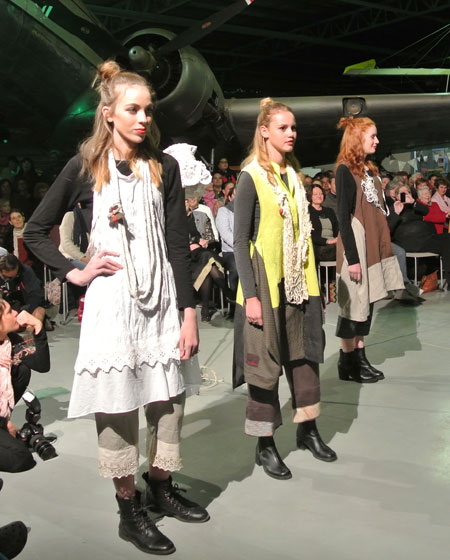 At left: “Shirkims” by Philomena Hali: made from deconstructed  shirts and kimonos. She kept her interpretation of the theme simple, using light and dark.

And below, in order from top:
• “Tracy” by Carmel Ryan, a long-time Alice resident who has recently been living in the Top End. “A lot of Darwin people are still in the shadows of Cyclone Tracy,” she said.

• All three runway items by Kerry Lenehan, ex-Alice, now living in Sydney. Her creations reveal a love of fabric born with the entry into her childhood of a piece of shibori silk from Japan.

• Julie Millerick starts by dying wool with local plant materials before then constructing her garments.

• Another Top End-inspired piece by Carmel Ryan – getting out of the shadows of a desert winter, heading for the tropics.

• A doco about George Harrison is the unsuspected starting point for this reconstruction from a sari by Franca Frederiksen. George got out of the shadow of Lennon and McCartney by going to India, is how the train of thought went.

• Peter and Tiffany return to thunderous applause. It looks like they have donned creations by Julie Millerick and Simone Guascoine respectively.

• Millinery by Marg Johnson, inspired by the MacDonnell Ranges: “Early morning light, like a fine gauze, lifts to reveal a tapestry of colours and textures, and always light and shade.”

• Pieces allowing “light to shine through, shadows to be dispersed”, by South Australian designer Sinead Pogue who hopes that “Australia will find the courage to step boldly into the light, seeking renewable energy and justice for original inhabitants and new arrivals”.

• And finally, It’s not hard to recognise the inspiration of the Mexican artist Frida Kahlo in the creations by Simone Guascoine and Sarah Hill. 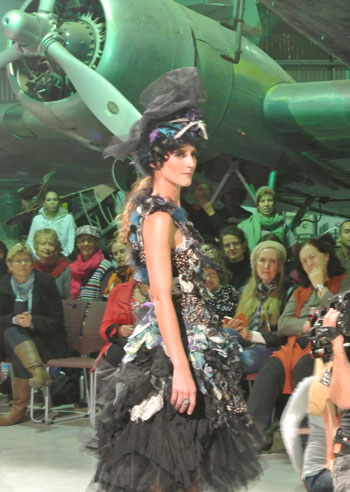 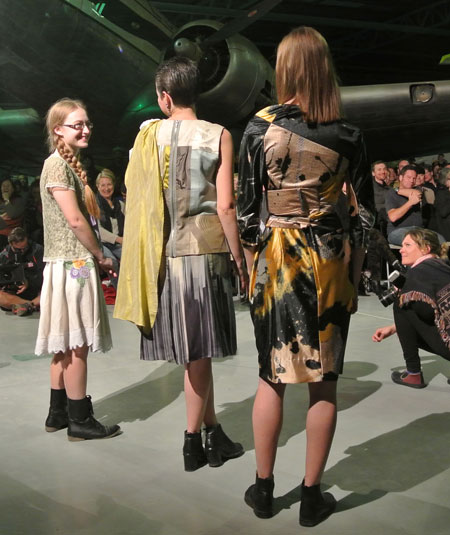 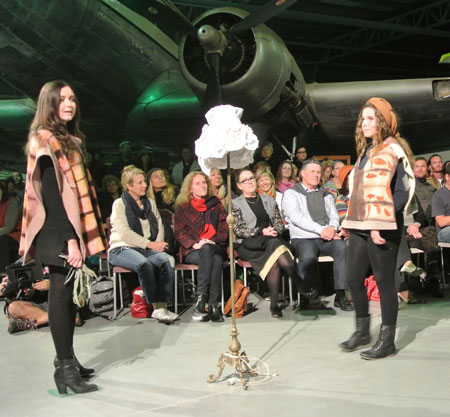 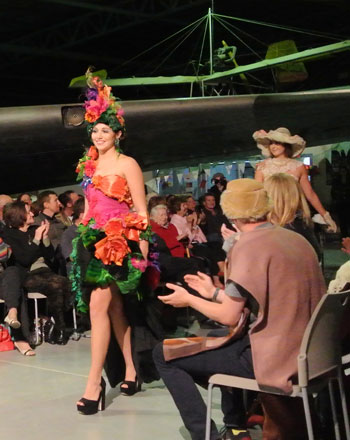 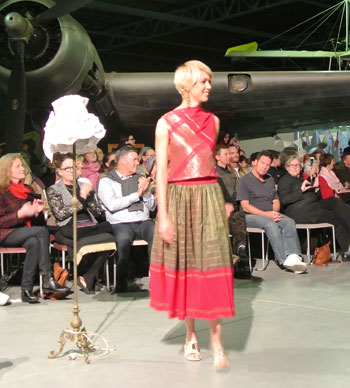 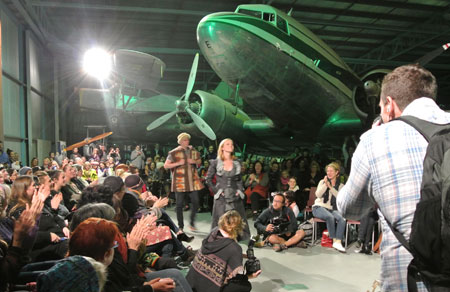 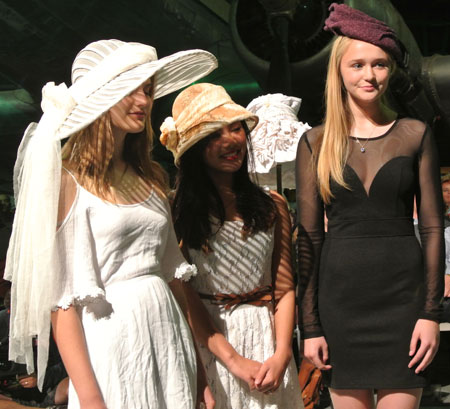 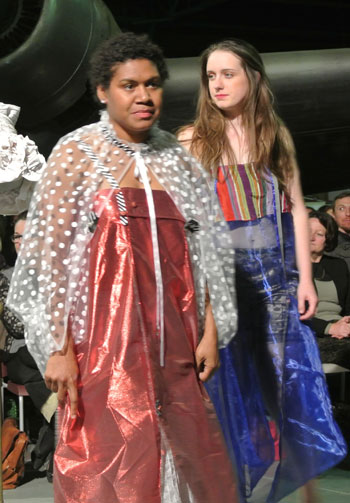 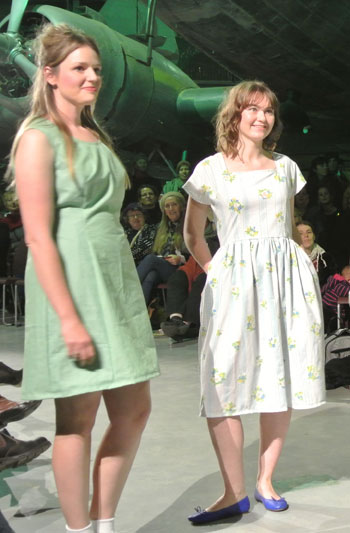 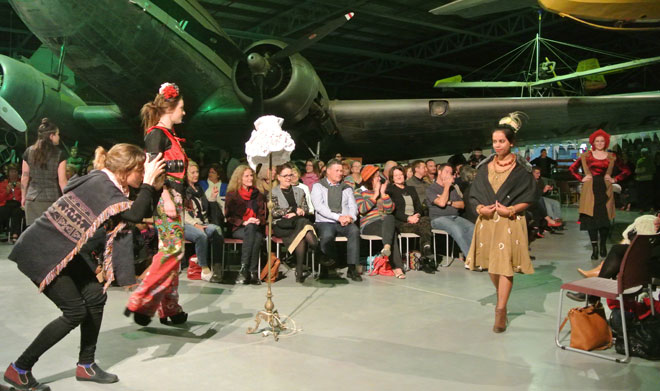