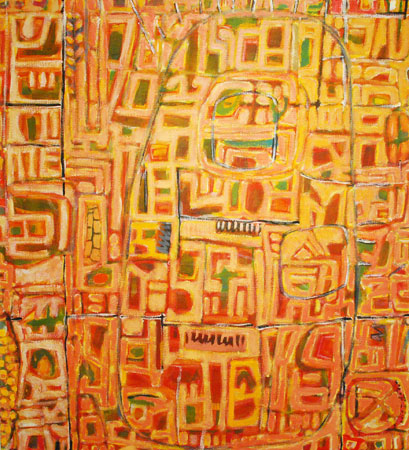 How can you recognise place in a work of abstract art? Wayne Eager’s exhibition invites us to do so, to begin with by its title, Desert Works, and by the inclusion of two paintings dating from his early years in the Centre.

Like many before him and many who will come after, Eager was compelled to respond to the form, scale, spaciousness, colour, the sheer presence of the land he was in, and to do this directly, explicitly, as we can see with Ulampawarru (Haast’s Bluff), 1994, and Anyali, 1995. The first, a gouache on paper, is more straightforward, a kind of recording, a noting; the second is more complex, working up an impression of senses assailed, by so much light, colour, movement.

Before arriving Eager had established an abstract expressionist painting language from his time in the 1980s with ROAR Studios in Melbourne. Soon he would find his way back to it, but this does not mean that he left his engagement with landscape behind. 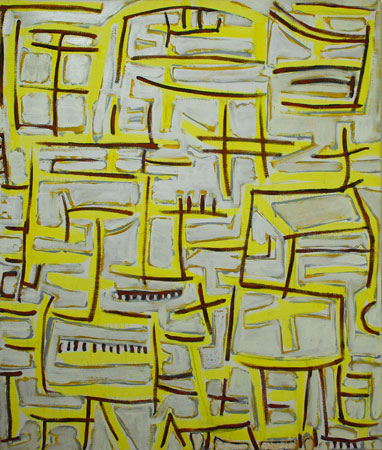 His titles for individual works guide us: Linear Landscape, The Flood, Winter, Outstation, Northside Rocks and so on. There are the ghosts of form in these works, loose diagrams if you like, brushed-in lines denoting boulders, tracks, grasses, perhaps clouds, expanses of land, perhaps fences and other human-made structures. Not so much to be sure of, as to be caught up in. Eager takes you on the ride with his mood — into a day of clarity, a day of travel, of reverie, delight, frustrations.

I saw this small but rewarding show on the same day that I listened to the launch of the CD, Desert Klezmer, by Rusty & the Infidels. Eager plays the guitar in this eclectic ensemble (he is pictured below at the launch). As I tuned in to its evocative music, it struck me that his paintings work in a similar way. Just as the different instruments came together in a kind of meta-conversation – their separate voices heard all at the same time, producing their transporting effect rather than a single proposition – so Eager’s line, movement, colour take you to a place. Not a mundane place, signposted along a well-worn path; rather a place caught in transmission from the confluence of a day’s circumstance — sun, wind, light, space, land and a gamut of human events.

Shows until 28 June at the Araluen Arts Centre. 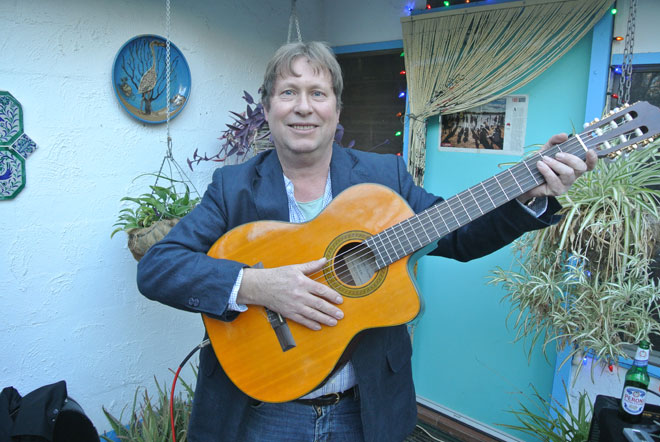