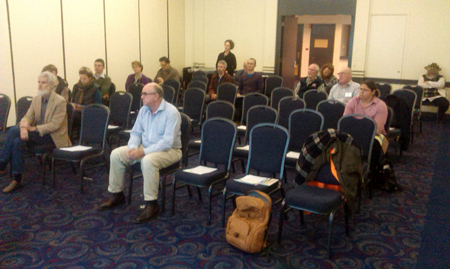 The topic was the survival of Alice Springs. There was standing room only. Government representatives were in town to deal with the dropping level of ground water upon which the town depends. Exploration for new supplies had been stagnant for many years. The crowd spilled into the hallways.

If you subtracted public servants the crowd was, well, fingers of two hands.

Yet the Alice Springs session of the NT Government’s “Our Water Future – Conversation with Territorians 2015” was interesting, courtesy mostly of the handful of locals asking questions, with ALEC’s Jimmy Cocking the major contributor.

Not surprisingly, answers to the questions were sparse as Water Directorate ED Darryl Day was in town mostly to get feedback (deadline for comments is June 30), and the story turned out to be not the answers, but the questions.

These focused on water trading, the dispensation from getting a water licence for “mining or petroleum activities”, fracking, how many years the Alice Springs aquifers will last, and exploration for new sources available to Alice Springs, an issue about which the government seems to have a chronic brainlock.

These are issues that have been in the public eye for a long time, but Mr Day and speakers teased out some less known aspects, even if only by refining the questions.

One discussion paper circulated says: “A team of Department of Land Resource Management and water resource scientists have completed an intensive investigation and mapping of 10,000 hectatres of land and water suitability for agricultural development on the Tiwi Islands.”

And it will be spending $2.4m per year for four years on similar studies “of how to develop the North”.

The Alice News has asked Mr Day how much of that $10m will be spent south of Ali Curung, and he has taken the question on notice.

The Minister has declared areas as “water supply and sewerage service areas,” says another discussion paper, but mining towns Nhulunbuy and Jabiru are not included.

How come the Ayers Rock Resort, no less a one-company town, is not also excluded?

Mr Cocking kicked off the discussion by alluding to a media report – denied by her – that Tina MacFarlane, former CLP candidate for the Federal seat of Lingiari, is selling her family’s rural property, Stylo Station, near Mataranka, after getting a controversial water allocation.

Mr Cocking asserted that the “large allocation” of water, in the event of a sale, would allow Ms MacFarlane to “make money out of nothing”.

The questions arising from this, but not articulated at the meeting, seemed to be: Can politicians not have a rural property? If they do, should they be prohibited from selling it? If you think there are any other questions, please put your comment into the box below.

Water licences, which are subject to a string of conditions, are allocated, usually for 10 years, to the first cab on the rank, as Mr Day put it.

They are transferred to any new owner of the land, as a pamphlet circulated at the meeting made it clear. What’s wrong with that?
Mr Day on fracking: Alan Hawke has prepared a report with a series of recommendations, “but the work is continuing”.

Mr Cocking: The Hawke report recommends very few no go zones, only around population centres, and gives only “guiding principles”. In terms of aquifer health, where is trigger point?

Mr Cocking: Water Smart in Alice Springs – should we have another one? [Note: With a budget of $15m the last one, ending in December 2013, was 11 times the cost of the 700 megaliters saved, calculated at the domestic tariff.]

Woman: Which Australian jurisdictions have got the water planning right?

Mr Day: WA is dealing with a similar process. Maybe we need licenses longer than 10 years. The Murray Darling system had been over-allocated yet coped with drought without affecting the economy. That system had to undergo a transition from a degraded system. The system the NT needs is likely to be unique. We need to have a better understanding of where the aquifers are. In the past there has not been enough investigation.

Research has been limited to communities: “We need more work there,” said Mr Day.

We need to look at competing demands, including mining, and work on the regulatory process.

Mr Cocking: People are cynical about the process. It needs to earn more trust. Should the Mining Act be changed? How should this be managed?

Mr Day: A change in legislation could be one way; comments are welcome. This issue came up in other forums in this series of consultations.

Mr Day on any restrictive allocation plan: It is not the blunt instrument we should be using. Alice should embrace a whole range of measures, ranging from watering of sporting fields to building codes. A cap is not the answer. Should a target be imposed on the present sole operator, Power Water Corporation, which holds the monopoly licence for water and sewerage supply services for all the “designated areas” – population centres?

Man: Territory Housing and the real estate industry could help, especially where water rates are included in the rent.

Woman: Do we have a gauge for water in the aquifers on an ongoing basis?

Mr Day: Ground water is where the game is in the NT, especially for agriculture. We need to know where are aquifers are. Half of the landmass is Aboriginal owned. We need to focus on these communities.

Mr Cocking: The strategic reserves policy has been scrapped by Giles.

Jane Munday (MC for the meeting): This was a Cabinet decision, but we want to hear your views.

Man: Is there a case for different charges for government departments to encourage savings?

Mr Day: There is a uniform tariff policy at the moment, a level playing field for regional development. This measure may not be the right driver in conservation issues.

Man: Have multi-level tariffs been thought of?

Woman: Sewerage costs more than water. Sewerage rates could be linked to water usage, on the basis that people who use less water generate less effluent.

Mr Day: The fixed sewerage charge takes into account that the network of pipes needs to be maintained.