Music from the old country celebrated in the new

What brings the popular musical tradition of Yiddish-speaking peoples from Eastern Europe into a recording studio in Alice Springs? Quite a journey, it turns out.

It begins almost a hundred years ago with a Jewish wedding in the town of Pietrokow, Poland. The bride and groom, Raisele and Mordechai, and their guests danced to the music played by a band of klezmorim – musicians who minstrelled their way from shtetl to shtetl, village to village, right across the old country. 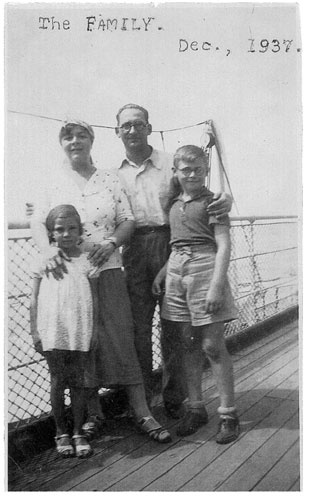 In the 1930s the couple and their children (at right) got on a boat headed for a new country, Australia, fleeing the impending Nazi catastrophe that would sweep Europe.

Meanwhile in the 1920s another Jewish wedding had taken place in Melbourne. The groom was Perth man Schmoolie, known as Sam, a respectable young cigar-smoking businessman, second son of a Russian Jewish migrant who had come to the new country earlier to seek his fortune. His bride was a slim-hipped, sweet-faced beauty by the name of Frieda, who loved to dance the charleston. On her wedding day though she joined her husband in a stately waltz to a palm court orchestra in a fancy hotel.

These couples – with faith and aspects of cultural identity in common, but in many ways worlds apart – would eventually become the grandparents of Russell Goldflam. He arrived in Alice Springs in 1981 to take up a position as an ESL teacher with the Institute of Aboriginal Development, intending to stay only for a year. More than three decades on, he is now well known as a lawyer, an advocate against violence and for justice, lover of the visual arts, and fine public speaker. Add to this list versatile clarinetist who embraces the musical traditions handed down on both sides of his family.

For Sam – while he disapproved of the Yiddish-speaking, fiddle-playing Jews arriving on boats off the shores of Western Australia, to the point of petitioning against them – loved classical music. He presented Russell with the clarinet he plays today on the occasion of his barmitzvah – “to play his beloved Brahms and Mozart and Beethoven, which I still do, with love”, says Russell.

But Sam disapproved of frivolous modern dances and once he’d married Frieda, never permitted her to dance the charleston again. When a band struck up the charleston, or jazz, Sam would put on his topcoat and walk away, just as he would from the music of those fiddling Yiddele boat-people – the klezmer music now celebrated on the CD, Desert Klezmer, recorded by the unique Alice Springs ensemble, Rusty & the Infidels. It was launched on the weekend from the courtyard of Russell’s home, the melodies interspersed with his story-telling.

The ‘infidels’ are all immigrants to the Centre, just like Russell, but he is the only Jew among them. All of them would have their stories of how they came to be here and the traditions they brought with them, but as immigrants do in the Centre they have embraced its cultural eclecticism.

Their klezmer is a music rich in colour and feeling. Some of it is full of yearning, much of it makes you want to dance – not the free-form individualistic moves of the contemporary dance floor, but something archaic, in a circle perhaps with children, young people, old people, in a village square, or at a smoky wedding feast … or in a desert courtyard.