Council rates to rise 6% if budget draft is adopted 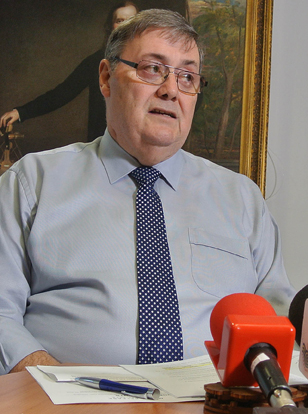 The town council is proposing a rate rise of 6% which would increase the minimum annual rate by $68.

The draft budget announced by Mayor Damien Ryan this morning (pictured) is open for public comment until June 19.

The council wants to commit $1m to solar projects. The scope of these, yet to be defined, would depend on any supplementary government grants and contributions from other sources.

Mayor Ryan said the objective is for solar power to replace some of the electricity bought from Power & Water, “one of the biggest” expenses for the council and expected to rise.

Community organisations would be getting $300,000 in council grants if the budget is adopted.

Increased functions for rangers, as suggested by Chief Minister Adam Giles, are not in the draft but are subject to continuing discussion, says Mayor Ryan.

The council, which is not allowed to have a deficit, would have a $39,000 surplus.

A 20% target for an Indigenous component of the council workforce remains the “desire” of the council – it is now 12% and had previously reached just over 15%.