ABOVE (from left): Uncles Martin, Bob and Jack. AT RIGHT: Ted Egan and his new book.

Ted Egan has chosen a place for young people, St Philip’s College, for the Alice Springs launch of his latest book, The Anzacs, 100 Years On.

It will take place next Tuesday, May 19, a century exactly after the man with the donkey was killed by shrapnel. Private John Simpson Kirkaptrick used his donkey to transport wounded soldiers from the front at Gallipoli. He had “become separated from his own unit and had carried on his perilous work on his own initiative,” as General John Monash later recorded it.

Mr Egan was 12 when his mother told him the story of her three brothers in World War I: “She was one of the most anti-war persons I’ve ever met.

“War is obscene, war should never be contemplated as a means of resolving differences. You’ve got to sit down and talk things out,” says Mr Egan.

He intends to mark this year the deaths of other World War I heroes, not only with the words in the book and songs on a CD included with it, but also with functions throughout Australia and New Zealand, on the centenaries of their passing.

“Conflict is our normal mode of living,” says Mr Egan.

“Peace is something aberrant that happens every now and again. We’ve got to turn it ’round, look for something good in one another.”

In that quest, is Anzac such a stand-out event?

Says Mr Egan: “World War one was so stupid – it should never have been started. 35 million people died as a result of it. Almost 70,000 Australians were killed, 150,000 wounded.

“These were the prime of Australia, but every other country would have been the same. They were sacrificed in this nonsense.

“My uncle Jack, who was killed at Gallipoli, was going to marry a local girl, from a fine family. He never came back. She never married. The children of that union were never born. The genetic loss to the world is just immeasurable.” 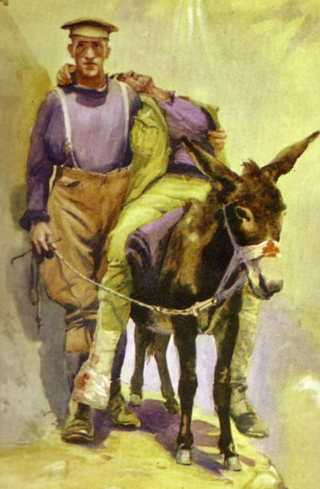 Mr Egan says his presentation is “on a very individualistic basis” ranging from a German soldier on Christmas eve 1916 “to my uncle Bob who was on the other side, in the trenches for 18 months straight, and I say, have a look at his eyes. What has he seen?”

Bob came back relatively unscathed, “had nine children, ran his farm”. Martin “went away looking like Errol Flynn and came back as a shell-shocked wreck”.

NEWS: In what way does Gallipoli relate to our current situation? We’re still in the shadow of a bigger nation and we’re still doing as we are told by it – in Vietnam, Iraq and Afghanistan, for example. Do we learn a lesson from Gallipoli?

EGAN: I want that to happen, yeah. I want us to have a very large military force to defend our country against any aggressor, but I want them mainly to be there for humanitarian reasons, to do the tsunamis, and the earthquake in Nepal.

You’ve got to face the reality, there are occasionally idiots in the world and you have to do something about them, have them aware you’re not afraid of them. And if we are stronger we can better take an independent stance.

NEWS: How do the $350m we spent on the Gallipoli commemoration, and the $90m plus we’re going to spend on the Australian National Memorial site in Villers-Bretonneux, France, fit into that? Could that money have been spent on making us more self-reliant?

EGAN: I would think so. I’ve seen a few good things but I haven’t seen a really positive approach. I’ve seen politicians swanning around, making themselves look good. “Who’s coming to Gallipoli with me …” You’ve got to have a presence to commemorate Gallipoli and the war dead, but it should be much more honest, and much better informed.

NEWS: Does your book articulate that?

EGAN: I would think so. A lot of people won’t like the book because on every page it is anti-war – but at all times it salutes the heroes.

NEWS: Some 2000 people were at the dawn service in Alice Springs. Some of them were kids.

EGAN: I love the way kids are observing Anzac now because they are not confronted as I was when I was a boy. I was confronted by my two uncles, one of whom was pretty sane but the other came back severely damaged mentally, and the place was full of sour old fellows with one leg or no legs, driving lifts, or alcoholics everywhere, beggars on the streets.

Now they’re all gone and the children are looking at their grandfathers’ photos, when they went off to the war, handsome young men. Well, they say, he’s up in heaven, he’s looking down on me. It’s a good state of mind to start with.

Then they can be taken into the more serious considerations. The Simpson one, the man with the donkey, is a great story. He’s a bloke who never fired a shot in the war. Let’s make him the ultimate hero.