Bonding on a tough trek in magnificent country 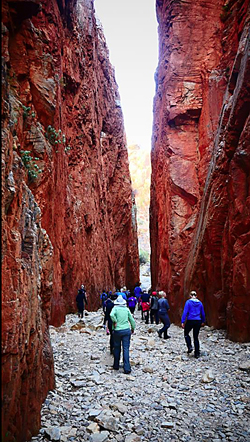 “Out there company hierarchy doesn’t count for anything. We were all equals. Some very junior staff were leading executives.”

When it comes to corporate bonding exercises it doesn’t get much harder than doing the 12 sections of the Larapinta Trail – 223 kilometres – in 11 days.

“It was absolutely phenomenal,” says the organiser Tony Messenger. “You develop resilience, adaptability, learn to depend on other people, leadership, team work.”

The trek for the 32 walkers, 25 of them employees of the CGU Insurance company and the rest mates and family, began at 2am on May 2 with a night walk to the top of Mt Sonder, in time for the sunrise.

They did another 15 clicks on the same day along Section Two.

This afternoon they walked into the Telegraph Station in Alice Springs to a reception by the Ngaanyatjarra Pitjantjatjara Yankunytjatjara Women’s Council, the Central Australian charity for which the trekkers raised $112,500 so far –  and more is likely. 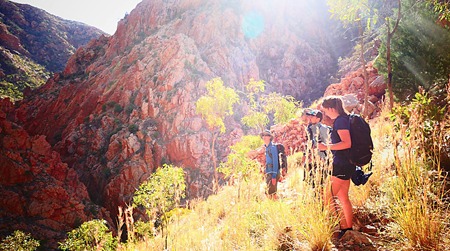 In fact, they had to raise at least $1000 each to qualify for the walk.

Then it cost them another $1500 each, and they received support in kind from companies including Centre Bush Bus.

All paid the same, including the support crew of six – also from CGU – who prepared the camps, provided food, water and other and supplies and boiled the billy in the morning every night, except for Rocky Bar Gap.

That was the hardest section because all food, water and camping gear had to be carried – and the daytime temperature was 34 degrees, says Mr Messenger.

All 32 finished the walk except two missed only two sections, because of minor injuries. 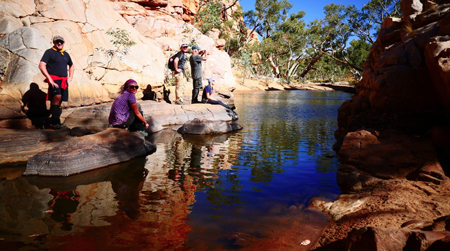 They walked in five groups of six each.

There were twice as many women as men, and the age range was 16 to 52. Most were from Melbourne but also from Sydney, Brisbane and Adelaide.

All had done fitness training before heading to The Centre. 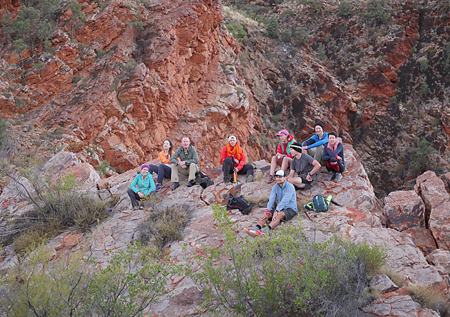 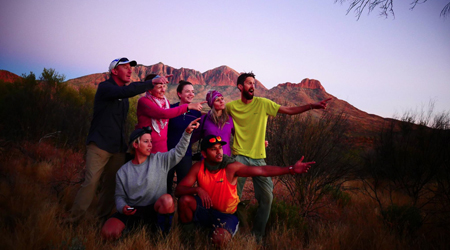