Land grab, but no dying pillow 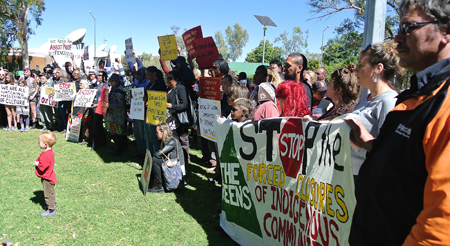 It was fire and brimstone at noon today when a crowd of some 200 listened to prominent Aboriginal activists on the council lawns, thundering about the possible closure of remote communities in Western Australia.

Whites – mostly alternative lifestyle persons, to judge by their colourful attire – outnumbered blacks, much to the chagrin of some speakers.

One said Aborigines will travel thousands of kilometers to a football fixture but won’t come to a rally like this. 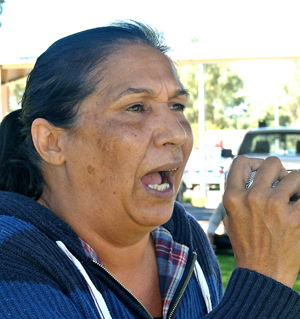 Tangentyere boss Walter Shaw said people who are in the pub “should be here”.

Harold Furber made the sad announcement that the local stolen generations NGO is closing its doors today because of funding cuts, and nine jobs will be lost.

Patricia Morton-Thomas, of 8MMM television fame, said the WA proposals are “the biggest land grab” since the 1770s.

She said she had a nephew who died in custody [Kwementyaye Briscoe], that white culture was one of “beer and barbecues” which her culture would easily “wipe off the face of the earth”, and that sheep and cattle had made the land barren and desolate.

“We will fight,” Ms Morton-Thomas said. “We will not rest our heads on the dying pillow.”

Town Council elected member Chansey Paech, who introduced himself as an Eastern Arrernte person, said white people are taking away Aboriginal land to make money from it. 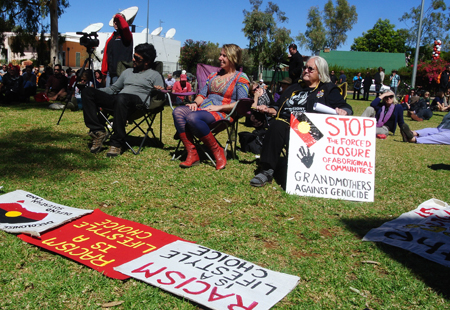 The current NT Budget was handed down on a “day of shame” – doing little for Aboriginal people living in “poverty and squalor,” said Cr Paech.

Christa Bartjen, of the NT Council of Social Service, said funding of “lifestyle choices”, which is how Prime Minister Tony Abbott labelled Aborigines’ desire to live on tribal lands, should be seen in the context of allocating government money for car racing facilities.

She said competitive tendering for public funding is an obstacle to forming partnerships. Also, tendering cycles are mostly too short.

Marlene Hodder, representing Grandmothers Against Genocide and the Greens, called for a treaty and said “it’s payback time – pay the rent.” 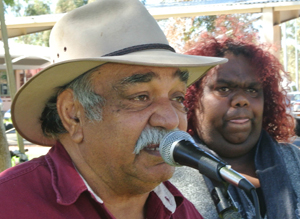 It was Alice Springs’ contribution to a day of nation wide protests.

PHOTOS from top: Posing for pix at the end of the rally • Patricia Morton-Thoams • Marlene Hodder and rally banners • Harold Furber and MC of the rally.