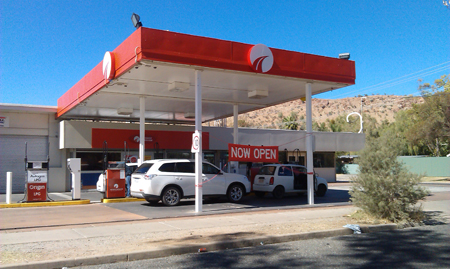 UPDATE 1pm Saturday: The discounts are already in place. The Alice Springs News Online this morning bought premium unleaded fuel for $1.50 a litre at the Indervon service station (pictured) in Gap Road.

Indervon Petroleum on Gap Road will be selling fuel at an 8 cents discount from May 15, according to a media release from Chief Minister Adam Giles.

He says his government welcomes news that the Automobile Association of the Northern Territory has struck a deal with United Petroleum to offer discount fuel to members.

“The discount of 8 cents a litre is the highest available in the NT and one of the most competitive in Australia,” Mr Giles says.

The latest figures from the Australian Institute of Petroleum show that unleaded fuel across the Territory is now an average of 36.8 cents a litre cheaper than it was a year ago, he says.

“Fuel is now down 21 per cent Territory-wide over the past year. Of all the major centres, the biggest fall has been in Alice Springs, down 38.8 cents per litre over the year. Prices in Darwin are down 37 cents a litre.

“Crucially, the gap between Territory and interstate fuel prices has also narrowed to 4.3 cents a litre, down from 22 cents a year ago before the Government held its Fuel Summit.

“These significant petrol prices falls are now positively contributing to our moderation in CPI which is great news.

“We have tackled this complex issue head-on, something Labor was never willing to do, and we are delivering real results,” says Mr Giles.

“This announcement today is another step towards reducing the fuel burden on Territory families and drive down the cost of living.

“I urge all Territorians to shop around and reward retailers willing to offer discounts to motorists.”