Comic take on clash of cultures 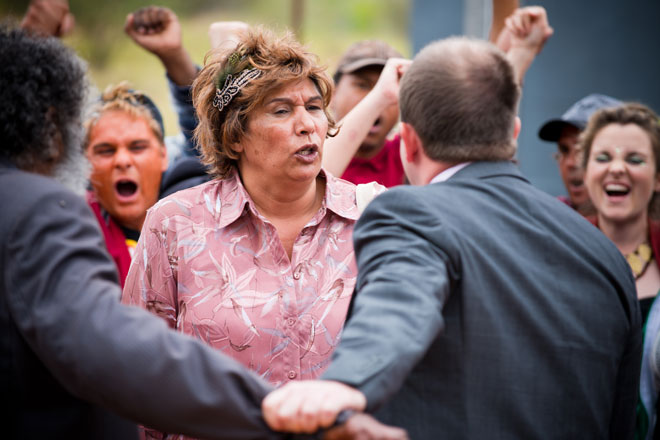 Above and bottom:  Trisha Morton-Thomas as Lola in scenes from the series and below right, as herself, in her hometown last week.

“Potentially everybody” will be offended by the “politically incorrect” new black comedy out of Alice Springs, 8MMM. But its writer / producer Trisha Morton-Thomas, who also plays one of its lead characters, has “great faith” in the humour of the people in Alice Springs. Their reaction to the six-episode series, which goes to air on the ABC starting April 29, is what she most cares about.

She’ll be able experience that very directly when locals get a preview free public screening of Episodes One and Two next Sunday evening, April 26. The production looked first at hiring a theatre for the screening but plumped instead for the Town Council lawns – “so that whatever criticism comes, comes from the entire spectrum of my home town, regardless of whether they live in the town camps or the golf course, rather than a little select group of people”. 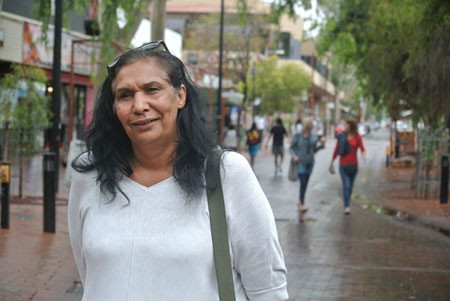 Whether they love it or hate it, Morton-Thomas expects that the Alice audience will recognise itself in the story: “Even if the characters are a little heightened, I think we capture the essence of Alice Springs and the type of people who come here quite well.”

The setting is in an Aboriginal radio station and the three ‘M’s are “the missionaries, mercenaries and misfits” – white – bent on saving their Aboriginal colleagues from themselves. It’s hard yakka, both the saving and the being saved!

It may be a fictional world but the story-lines are drawn from real life. The idea for the series came when Morton-Thomas was sitting one day with Rachel Clements – her partner in Brindle Films – and friends, laughing about their experiences of working in various Central Australian organisations and coming up against the three ‘M’s.

Not long after, the ABC launched a callout for their Sacred Cows initiative, looking for politically incorrect comedy. Brindle Films put in a proposal and the next thing they heard was “congratulations, we want to go with this”. That was four years ago.

Together with Danielle MacLean, Sonja Dare and some savvy script editors, Morton-Thomas threw herself into the writing. 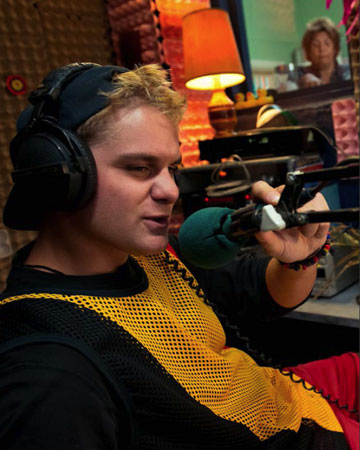 “I had some of the script editors saying, ‘Nobody would do that’, and I’d say, ‘Actually, they do! And that’s why I’m putting it in the script, because either I’ve seen it or somebody has told me about it.’ 80% to 90% of this series is based on actual experiences of people in Alice Springs. People have been really generous in giving me permission to use their stories, which they’d tell me, killing themselves laughing.”

Not all of the laughs come at the expense of whitefellas. Jampajinpa (Benjamin Weitmann), the DJ-in-training (pictured left), is so proud of being black he’s “permanently dressed like an Aboriginal flag”, while Milly (Elaine Crombie), the receptionist, is reluctant to answer the phone or send an email lest she break a nail “or heaven forbid, a smile”.

The radio station setting gave the writers the opportunity of grappling with a rich range of stories, sending their characters off to a repatriation ceremony, to Canberra to talk to PM, on a human rights march or to inquire into health, housing, morals. But don’t worry, you’re not going to be ‘educated’: “It’s not my job to educate, that’s our schooling system’s job. This is just a social comment from me , it’s ‘for your information’. And if you’re interested in learning more, go away, pick up a book, we’re the most written about culture in the world!

“Australians are highly schooled but poorly educated with respect to this country and to Aboriginal people in this country. You just have to look at Alice Springs Community Forum, which is one of my favourite sites on Facebook, to see how ignorant people are, how ill-informed they are. That irks me. I truly don’t believe this is a racist country, but it’s a very ignorant country

“If you’re not being taught the truth about this country at school, it’s up to you to pick yourself up and go away and study it, or learn something about it on your own. If you’re constantly swallowing what the media and anyone in control is giving you, then you’re never going to be free, as an individual or as a society. You have to be thinking.

“How many people on the Alice Forum engage with Aboriginal people on a personal level, sit down and have yarn with them. They don’t. They’re just happy to drive past and make a judgement of them based on the colour of their skin, and that’s wrong, that’s wrong anywhere. You hear the catch-cry all the time, that there’s good and bad with every people, but it’s the truth! 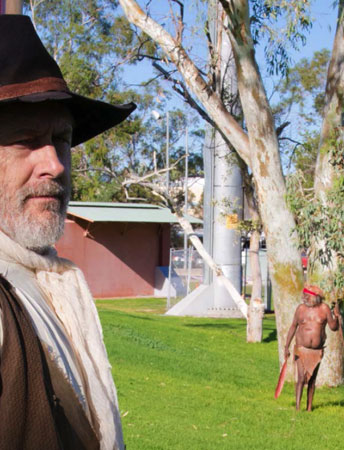 “8MMM uses the characters to deal with these issues, like Dave [the Training Manager who doesn’t think Aborigines can be trained, played by Geoff Morrell, pictured right]. ‘Been here for 60,000 years and they’ve done nothing with the place!’ As an Aboriginal person you hear that constantly. ‘Well, you‘ve been here for 200 years and you’ve dug everything up, you’re destroying our country!’”

It’s that clash between cultures that 8MMM plunders for its laughs. Humour is part of Morton-Thomas’ daily life, but it’s also part of everyday Aboriginal culture:

“It’s funny that people expect us to be so solemn and serious. You spend time with Aboriginal people – we are laughing all the time, even though the most atrocious things happen to family, we still have this great capacity to be able to laugh. It’s the only way we can survive. It doesn’t overcome grief, but you live with it this way.”

Morton-Thomas has had her own share of grief. Many will remember her pain and rage following the coronial inquest into the death of her nephew, Kwementyaye Briscoe, in the Alice Springs watch-house. That was two years ago. Morton-Thomas was already deep into the 8MMM journey and she doesn’t resile from its embrace of comedy.

“It’s how my culture deals with tragedy, with laughter. It’s something I truly admire about my people, even if at times it’s cringe-worthy. You wonder why you laugh, it’s so cruel.”

Inevitably there are portrayals of police in 8MMM. Morton-Thomas thinks she has been very fair to them: “I could have portrayed them as just hostile, but there’s a mixture, and I think it is a pretty balanced mixture in the police and in the community.”


Some locals might show their worst selves on Facebook, but others’ much better selves have been revealed in the embrace of the production:

“Alice Springs is like that. So many people were so generous with their time and their knowledge of this area and their particular knowledge of film-making. The Mayor has been behind it 100% from the start. So many great people in this town wanted to help.”

The public screening will be Morton-Thomas’s chance to say thank you to the ‘better selves’. 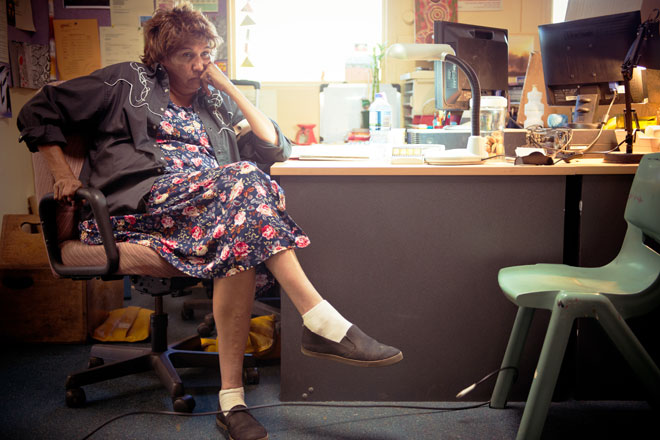