Home Issue 6 Do we really need to seal that other loop?
Issue 6Issue 7Volume 22

Do we really need to seal that other loop? 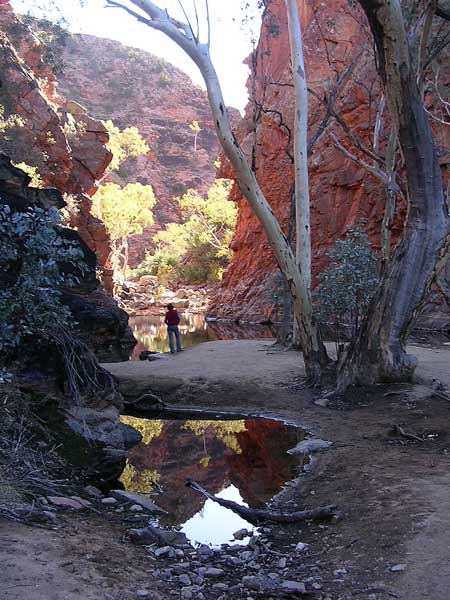 Completing the Inner Loop road seal in the magnificent West MacDonnells is an excellent call by Chief Minster Adam Giles.

And now, perhaps should we drop the sealing of the ever delayed Mereenie Loop to King’s Canyon and the Ayers Rock Resort.

Which of the following two options would Alice Springs prefer its visitors to take:–

[a] Travel west after visiting Hermannsburg – fascinating for many reasons – for 43 kms, turn right to call in at Gosses Bluff, then make your way back to Alice via Redbank, Glen Helen, Ormiston, Ellery, Serpentine (pictured), Standley, Simpons. Stay for a few days at a few of them, soak up some of Australia’s best nature. Back in Alice Springs spend another few days (and dollars); or …

[b] Keep going straight ahead and disappear into the Never Never of the Ayers Rock Resort.

This has been a no-brainer ever since the tail began to wag the dog and Uluru, rather than enhancing the tourism industry of Alice Springs, proceeded to steal its clientele.

The resort has been in interstate hands for many years. It is now owned by the Indigenous Land Corporation (ILC) which has properties and businesses around the nation.

The resort’s owners were evasive when we asked them how much of their supplies, in value, are sourced from Alice Springs. Logic would suggest that they come largely from Adelaide.

Local employment at the resort is still very low. For decades the Indigenous population around The Rock preferred getting its income mostly from passive welfare, which makes the controversial $300m investment by the ILC even more of a puzzle.

Let’s face it, Yulara – did you even know that is its name? – has never developed into a township.

It is simply a resort. Resorts like it quite often have to look after themselves, yet the Ayers Rock Resort is generously supported by the Territory taxpayer with water, power and sewage utilities at standard rates, an airport, police, a school and a health centre.

Does that generosity really need to extend to massive promotion by Tourism NT – to the disadvantage of Alice Springs?

Some of that promotion money could well go to improving the East and West Macs facilities.

For example, while you will soon be able to “do” the Inner Loop in a cheap 2WD, you still need a 4WD to traverse the five kilometers from the sealed road into Gosses Bluff. Ditto the John Hayes Rockhole in the East Macs.

The notion of cutting loose the Ayers Rock Resort is getting around – hinted at by no less than Daniel Davis, vice-president of the CLP. It’s a discussion we need to have.

OK. It’s the Hermannsburg just south of Hamburg in Germany and the Glen Helen just east of Nottingham in the UK. Maybe you need to add “330 days of sunshine a year” or “zero pollution” or “best star sky in the world” to the search.

Greater Queensland as a hotspot has been revoked this morning for the purposes of travel to the Northern Territory, including the City of Brisbane,...
Read more
Issue 7

By JULIUS DENNIS A paper published by the Institute for Energy Economics and Financial Analysis (IEEFA) has slammed the NT and Federal Governments for pinning...
Read more
Issue 6

Veteran tour operator and Eastside resident Charlie Carter says there has been "42 mm of steady rain over night" – brilliant news. However, as nothing...
Read more