'Inner Loop' of West MacDonnell Ranges to be sealed 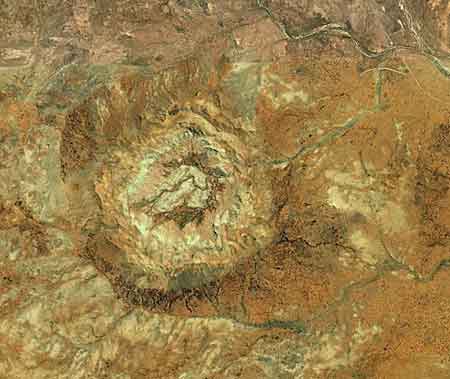 There will be a $25m commitment in Budget 2015 to the Mereenie Inner Loop over the next two years, Chief Minister Adam Giles announced today, for sealing 43 kilometers of the Larapinta Drive between Hermannsburg and Glen Helen.

This will make the round trip into the West MacDonnells to be all on “bitumen”.

Mr Giles says Tourism NT estimates the annual economic benefit from that will be $16.25m, through visitors deciding to extend their stay.

The long delayed Mereenie Loop, linking Hermannsburg with King’s Canyon,  of which the Inner Loop is a part, remains on the wishlist of the tourism industry.

However, the Inner Loop, passing the iconic Gosse’s Bluff meteorite crater (pictured), will further focus visitation on the Alice Springs region rather than aiding the Ayers Rock Resort.

Say Mr Giles: “This part of the world was made famous by the paintings of Albert Namatjira and I also hope the increased visitor traffic will provide new tourism employment opportunities for Aboriginal people in his home of Hermannsburg.”

Work is scheduled to start on the road in the second half of 2015.

“Tourism operators will now have safer, year-round 2WD access to the area. It’s also a boost for local Aboriginal communities and pastoral properties whose residents use the road,” Mr Giles (pictured) says.

“The drive market is a growing tourism sector for the Territory. This loop is a fantastic self-drive or guided tour route, taking in both popular and little-explored destinations in some amazing desert country.

“Last year, 140 000 people visited the West MacDonnell Ranges and I want to see that number grow by making the region easier to access.

“Over the next two years, the Territory economy will strategically tilt towards the tourism industry and the Government is laying the groundwork now to prepare the industry for this shift. We will not repeat Labor’s mistakes by failing to plan for this new landscape.

“The Central Australian tourism industry is starting to show signs of recovery after years of decline under Labor but we know that infrastructure will be a critical economic driver going forward.”

The media release from Mr Giles quotes Dale McIver, Deputy Chair, Tourism Central Australia: “This issue has been at the top of our infrastructure list for a long time. We only recently raised this with the Chief Minister at an industry meeting in Alice Springs and it’s fantastic to see that the Government has listened and made this happen so quickly.

“This is a significant investment which is extremely welcome among our members.”