Paddys in Alice have a cause to celebrate 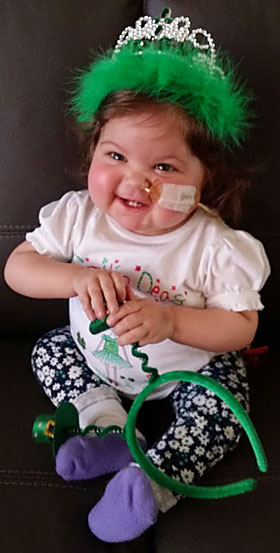 St Patrick’s Day is almost upon us, and in a tradition developed over the last four years “Paddys in Alice” are raising funds for charity.

This year the beneficiary is Eabha Connell (pictured), the 16-month-old daughter of an Irish Father and an Australian mother who were a big part of the community here. Emma and Thomas Connell had to move away because of the severity of their daughter’s medical problems.

Three days after her birth in Alice Springs in November 2013, Eabha started to appear jaundiced, and tests revealed she had biliary atresia, a condition that affects the function of the bile ducts around the liver. She also has no gall bladder.

She’s been treated extensively at Melbourne Children’s Hospital, even undergoing a liver transplant, and there have been many times where her progress has taken one step forward and two steps back.

It’s also a costly situation the family finds themselves in. Their nearest relatives are in Tasmania, so that’s where Thomas works in the week, while Emma sleeps on the couch in Eabha’s room at the hospital, welcoming visits from Thomas when he flies over from Tasmania at weekends.

On top of the costs of travel, Thomas is on a casual contract so if he needs time off he doesn’t get paid. The couple are facing a lifetime of medication costs for Eabha, and Emma says it would take a considerable improvement to Eabha’s before she’s free to work: “She needs 24/7 care. She has about 26 medications a day, so that takes up a lot of your time.”

So the Paddys in Alice are doing all they can to help the couple. And as Emma explained, it is very much appreciated: “You’re lost for words the way people think of you, people around the world who’ve never met me or Eabha. It’s unbelievable. Such a help, because until you’re in the situation, you don’t realise the expense.”

In a rare stroke of luck in the last fortnight, Eabha’s finally been able to leave hospital for the first time ever, and she’s been staying in the Ronald McDonald House. The family has just had the go-ahead to fly her to Hobart so she can celebrate St Patrick’s Day itself with the family, some of whom she’s never had the chance to meet. 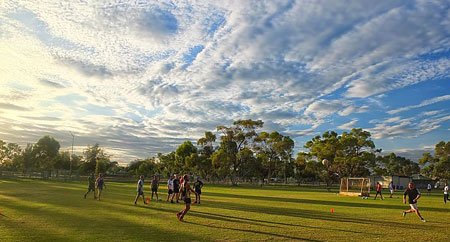 Bernie McGrath is one of the group’s organisers: “There’s a pretty big Irish community and it stretches back a lot of years. We get lots of help from guys who’ve been here a few decades – they bring us flags, decorations and jerseys from their county teams.”

And they need football gear, because the “International Rules” football match – to be played on Saturday – has become a focus of the St Patrick’s Day celebrations.

“It’s Ireland versus Australia,” says Ms McGrath. “I use those terms loosely!”

Post-match celebrations move to the Gap View Hotel, where the real fundraising effort kicks in. In the past causes like Purple House and the Irish Australian Welfare Bureau have benefited from the Paddys’ efforts.

If you want to help Eabha’s cause, you can read more about her story and donate via this fund-raising website: https://www.mycause.com.au/page/76699/eabhasstory

But better still, support the Paddys in Alice and get behind the events on Saturday. The football match kicks off at 2pm at Anzac Oval, with the after party at the Gap View Hotel from 4pm.

The Paddys say anything you can give will make a difference to this family, who call Alice Springs home, even though their situation doesn’t allow them to be here for now.