Your car's data: Who owns them? 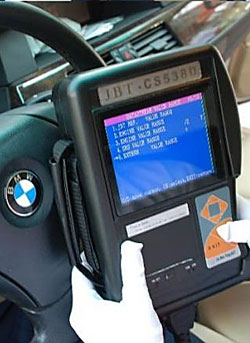 Data are becoming a major part of our lives: The government is looking for ways to check whom you are telephoning or who texts you. Through your mobile phone your every movement can be tracked. “We kill people based on metadata,” says a former CIA director.

But when your car gives up the ghost a hundred miles from nowhere, the data you are worried about are those of your vehicle. Right now these are the subject of a major brawl from which the consumer seems set to be emerging victorious.

Gone are the days when you can pull over, take off the air filter, give it a couple knocks on a rock (for those who are not bush mechanics, this gets rid of the dust inside), replace it and drive off.

The modern car is a computer on wheels. To take its pulse requires a diagnostic tool that checks on hundreds of details.
And that tool, most car firms will tell you, belongs to them and to their authorised dealers and workshops.

It costs a very large amount of money, they say, and they – the firms – claim they own the data that govern every function of your vehicle. Only they have the means to fix it. In other words, they have you by the short and curlies.

“The car brands are looking after their own interests,” says James Goodwin, acting Chief Executive of the Australian Automobile Association (AAA) which represents in the interests of more than seven million motoring club members.

“They are trying to lock customers into the ultimate loyalty program.”

But change is on its way.

In league with the states’ automobile associations the AAA is driving a campaign to make data freely available to the vehicle owners, and to those they choose to fix it.

Those independent repair people should have access to the data as much as the authorised repair firms, says Mr Goodwin.

What’s more, this technical information should be available to the roadside assistance people and – in the outback, for example – the driver as well.

He or she should have access, using their laptop, to the entire diagnostic information and have the option of getting instructions for fixing minor identified problems.

In short, when you buy a car you get not only a spare wheel, a jack and a wheel brace, but a DVD from which you can install the diagnostic software on your laptop, and a cable to connect it to the vehicle’s diagnostic system.

This is not an unreasonable expectation, says Mr Goodwin.

The spanner was launched into the manufacturers’ works when Federal Minister for Small Business Bruce Billson asked car brands, represented by the Federal Chamber of Automotive Industries (FCAI), to come to the negotiation table with the repairers and AAA.

The FCAI has now shelved its original code of practice and agreed, according to a media release, to a “voluntary code relating to access to service and repair information, training and the supply of quality parts.

“The code is supported by the AADA—the body representing motor dealers,” says the release.

Mr Goodwin calls it a heads of agreement, a “return to commonsense,” allowing independent repairers to reliably access diagnostic data, at a “reasonable” cost.

He says the manufacturers are now forced to provide information which the previously did not. “It’s a breakthrough.”

Mr Goodwin says there are important considerations in play.

Australia is a big country. An authorised workshop may be hundreds of kilometres away.

There is also much hoo-haa about the cost of the diagnostic equipment.

That this technology very simple is illustrated by the prices of after-market units that can be sourced over the net, usually from China, for around $100.

Mr Goodwin says that is a choice vehicle owners should not be forced to make. The generic units are not necessarily accurate, may not give the information needed or provide information that is used, may harm the vehicle.

But at the moment the standard answer seems to be (as the writer has been told recently): The diagnosis needs to be done in the WiFi environment of our workshop. Arrange a tow.

PHOTO: “After-market” car diagnostic tool from China: When you buy a vehicle, should you not receive a genuine one from the manufacturer?