Clontarf: it's more than footy 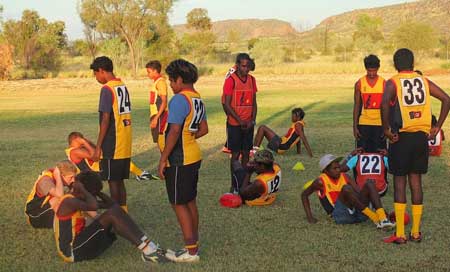 As the sun rose over the playing field at the back of Yirara College, the 40 or so children playing a game of footy in front of me were just a fraction of those doing the same thing that morning right across Australia.

There are three Clontarf Academies in Alice Springs, and a fourth in Tennant Creek which also falls under the Central Region.

These academies are amongst almost 60 others in the NT, WA, Victoria and New South Wales that cater for almost 3000 children. Everyone involved is working under one mission statement: “The Clontarf Foundation exists to improve the education, discipline, self-esteem, life skills and employment prospects of young men and by doing so, equip them to participate more meaningfully in society.”

Many people, including me, thought Clontarf was just about football. It’s a common misconception, as Tom Sullivan, who’s the director at the Yirara Clontarf Academy explains: “It’s just a carrot to get kids to come to school.

“Once they’re in the program the focus is on education, helping them with their schoolwork and supporting them where it’s needed, in all aspects of their life.

“The main goal is to get them finishing year 12, and then there’s an employment program set up by Clontarf to help them get work and be successful in society after school.”

And one way to condition the students to have enough self-discipline to cope in the workplace is through the early morning football training.

Regional Manager Daniel McNamee says: “It changes sleep patterns because they’ve got to get to bed early the night before training and then the night after training they’re actually quite tired because they got up probably before 6am. So they can then go on to do that in the workplace.”

Yirara’s Principal, Roger Ashcroft, says of the program: “They help us with behaviour, it lifts the kids’ spirits.

“They want to be someone and grow to be something else apart from just another kid, maybe someone famous, something good … it builds self esteem and it’s really good for them. We really appreciate having Clontarf here.”

Yirara student Preston Harrison is one of those ambitious young men. He says Clontarf’s given him skills and ambition to achieve his goals so he can be a good role model in his community. He hopes to open a football club after he finishes school.

And Kerran Martin, who grew up in Alice Springs, speaks passionately about the “brotherhood” he feels with his peers, as well as his new found confidence: “It made me into a bloke who can speak to other people.

“Clontarf was there for me and it gave me a lot of confidence through going out on trips and meeting new people, competitors, players.”

Its leaders like Operations Officer Darren Talbot who are on the front line of building that confidence: “My job’s quite complex. I do coach the fellas in what they love doing which is football, but I do lots of mentoring roles as well so a lot of bonding time.

“It’s about retaining the fellas, and the engagement time helps us nut things out with the fellas if they’ve got any issues and if they need help with their school work.”

And he certainly feels it’s a rewarding role: “Every day’s not a groundhog day, there’s always something special happening every day.”

And to listen to Andrea Johnston’s Friday Feature on the Clontarf Foundation, just visit 8ha.com.au.