Neglected past to get a bright future 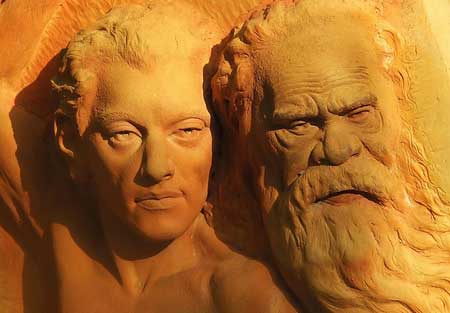 Living in a sanctuary amongst sculptures by one of your favourite artists sounds idyllic for any art and nature fan, but the challenges in one mysterious corner of Alice Springs are anything but.

Volunteer Caretaker Chris Warren has been keeping an eye on the Pitchi Richi Sanctuary near Heavitree Gap for about a year, and understands just how monumental a task it will be to bring the area back to a standard that can accommodate tourists. But he remains positive.

“A lot of work is going on that people can’t see and don’t appreciate, and we often get complaints that ‘things aren’t happening’ and ‘it’s never going to be open again’. We take a more optimistic view, but it is going to take time. The reality is that it’s a big job and it’s going to get done!”

The nine acre property has a portion that is heritage-listed sanctuary, and within that zone is reportedly Alice Springs’s first two-storey building, called Chapman House. It includes statues by Victorian sculptor William Rickets, as well as a collection of geological and historical artifacts collected by Leo Corbett, who originally ran the location as a bird sanctuary.

Warren says: “The rest of it has pretty much returned to bush, although in the past it was a thriving orchard and agricultural concern.”

Tasks on the to-do list include everything from eradicating buffel grass, to restoration of statues and artifacts, through to grant applications and fundraising.

The sanctuary’s current state is a far-cry from its heyday as a major tourist attraction, or just somewhere for locals to hang out.

It’s reported that Leo Corbett and his wife Elsa were a very hospitable couple with an open-house policy, so you could come in and make yourself a hot drink in return for a small donation.

“It’s been described as Central Australia’s first man-made tourist attraction. At its height, buses used to stop of their way back from Uluru. There were managers who had the responsibility of providing an Aboriginal cultural experience involving billy tea and damper, spear throwing and boomerang throwing demonstrations and things like that.”

Mr Warren recently played tour guide to the Alice Springs Field Naturalists Club, and he was surprised to find out how many of his visitors had been to Pitchi Richi before, despite it being closed for the best part of two decades. 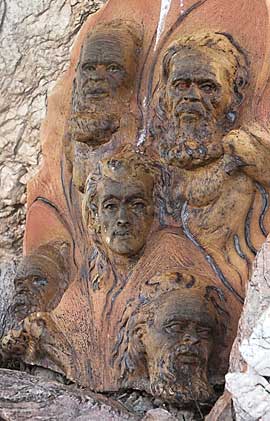 There were mixed reactions to Pitchi Richi’s current state, with some visitors surprised at how well the sculptures had held up against the elements, and others depressed because they could remember it as it was in the good old days.

Heritage Alice Springs manages the site and is currently reviewing its strategic plan for the sanctuary. Meanwhile, the organisation would welcome assistance from anyone willing to volunteer practical or organisational skills.

Chris is optimistic about what lies ahead, and has an idea for the direction of Pitchi Richi that chimes with the past, but provides for the future.

The beauty of Pitchi Richi and Ricketts’s sculptures will be celebrated through a photographic exhibition at The Residency in April. It’s being co-curated by Chris Warren and Stefan Carrillo as part of The Residency Arts Program, and will open on Thursday April 2nd.