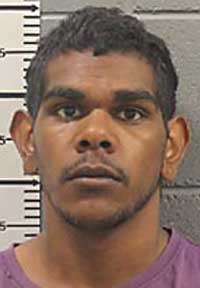 The news was “amazing”, “unbelievable”: the third man who had repeatedly raped her and her friend had been arrested. Detective Sergeant Carmen Butcher had just written to let her know. The young woman (whom I will call MF) lives in Finland, her friend (AN) in Germany.

They were tourists, visiting Alice Springs in May 2012, sleeping in the back of their car in a quiet suburban street, when they were gang-raped repeatedly by three youths.

In September 2013 two of the offenders, Ginger Green and Norman Kernan, pleaded guilty to their part in the events and were sentenced to 15 years with non-parole periods of nine years. At the time their victims could not identify the third offender and Green and Kernan were declining to do so.

That changed last year when Green rolled over and Bruce Impu (pictured), doing time in gaol for another offence, was arrested.

Today he pleaded guilty to five counts of having sexual intercourse without consent with AN and three counts with MF, “knowing or being reckless as to the person’s lack of consent”.

That legal terminology gives little idea of the women’s ordeal. It began terrifyingly, when they were woken by banging, loud voices and felt the car moving, being pushed. AN acted quickly, climbing into the driver’s seat and starting the engine.

As she did, Kernan smashed the driver’s window and Green ran around the front of the car with his rifle, which he pointed through the window at her head. Kernan reached in and took the keys from the ignition, using them to open the driver’s door. AN then saw the third man – Bruce Impu – standing back a little. All three had their faces covered.

All three are considered equally complicit: “When not acting as principal offenders themselves, [they] aided and abetted each other in the commission of all the offences.”

Impu’s lawyer, John McBride, made no attempt to minimize his client’s “horrendous crime”. He said Impu had come to some kind of understanding of the gravity of what he’d done. He was ashamed, remorseful.

“How does someone like that express remorse?” asked Justice Jenny Blokland. “What did he say?”

Mr McBride had asked him what he wanted to tell the court. He said: “I never thought it would go this far. I am very sorry.”

Impu was born in 1994. His father died at the age of just 25 from a heart condition. His mother was not up for parenting her three children on her own and sent Bruce as the eldest to his paternal grandparents who lived in a bush community.

He had a strong bond with his grandfather but he too passed away when Impu was about 13 years old. He was sent back to his mother. She was struggling as a single parent, drinking heavily and “failed” her eldest son’s need for control and guidance.

He had no “role model”, turned to alcohol, drugs and “a street crime culture”. He also became a father. The mother of his child was in court today as was his own mother. There were also other women and children but no men.

Schooling was intermittent, without attainment or accomplishment.

He has a 15-page criminal history at the age of just 20. It includes convictions for four previous aggravated assaults, an assault of a police officer and an aggravated robbery. He was 17 at the time of the rapes and continued offending afterwards. This was perhaps “a cry for help … I don’t know”, said Mr McBride. “His behaviour has always been errant.”

As a sentence he sought nothing less for his client than the penalty dealt his co-offenders but asked, given his youth, that the sentence “not be crushing”.

“It has to be to some extent,” said Justice Blokland.

She will sentence Impu next Tuesday. His lengthy criminal record will mean at least a greater non-parole period than his co-offenders’, and the sentence will be “totally cumulative”, meaning that it will not begin until he has completed his current sentence.

There were a couple of brighter notes in this dark litany. One was hopefulness in the third victim impact statement submitted by MF. She is beginning to rebuild her life. She is studying, meeting new friends and beginning to believe in a better future. However, she hasn’t been able to work since the assaults and has had to take a loan to support herself.

Impu’s arrest meant a lot to her and she expressed her deep appreciation to Detective Sergeant Carmen Butcher in particular, for her investigative work and personal support: “I feel blessed I got to know you,” she wrote.

Prosecutor Stephen Robson provided the other, outlining the support the women had received in Alice Springs after their ordeal: people in the community had donated to a fund-raiser initiated by Sgt Butcher to pay for their airfares back to Europe; a police officer had paid out of his own pocket for the repairs to AN’s car; and as she drove alone back to Brisbane police officers along the way, alerted by Sgt Butcher, looked out for her. She was able to park her car in the police compounds at her various stops and they advised her of where she could safely stay.

Justice Blokland on behalf of the court and the community expressed warm appreciation to Sgt Butcher and her colleagues who were in the court.


Note: Out of respect for the women’s privacy I have not used their names, nor their real initials. •  The photo of Bruce Impu was distributed by police media in 2013 when his arrest for another matter was being sought.