Stars in the making 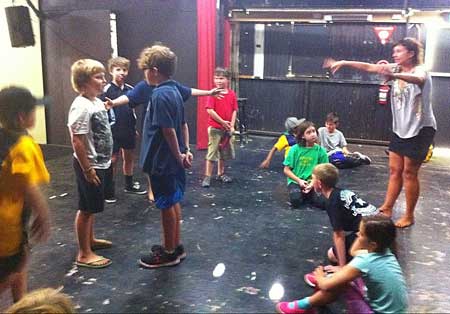 By ANDREA JOHNSTON from 8HA

After years of fending off eager parents, performance artist Melissa Kerl has finally got an answer for those who want an outlet for their children’s acting talents.

She has started in the Totem Theatre two eight-week youth theatre courses for children in two different age ranges to express themselves: 7-11 year olds on Tuesday afternoons, and teenagers Thursdays.

The courses are already fully booked out, something that isn’t much of a surprise to Melissa: “When the committee asked me to run the classes they were a bit tentative, but I said ‘don’t you worry, I’ve been walking down the streets of Alice Springs for years, having parents grabbing onto my leg saying ‘pleeeeease Melissa start a drama class for my kids’ so I had no doubt it would be successful.”

She’s being assisted by Unanyntji Scales, who wanted her son Finnegan get involved in theatre as a youngster.

“I did speech and drama for quite a few years when I was young, and it’s helped me in my life immeasurably – just giving me confidence and skills that I wouldn’t have had otherwise. I really wanted that for my child. As children of Alice Springs we’re so isolated.”

At the first class, 11 year old Charlie said he enjoyed the opportunity to have a tour of the theatre. Nine year old Bailey said he was there because loved acting at school and wanted to give it a try. Six year old Henry had a clear motivation for attending: “We get to be famous.”

Says Melissa: “There’s a real magic about being inside a theatre, and the kids are really getting the essence of that, and that’s a bug and a gift that you never lose.”

A performance is planned at the end of the eight weeks, at the very least just for the parents, but that idea is in the developing stages. As Scales explains, the pair are determined to establish the youth theatre movement properly and concentrate on what they believe the children really benefit from.

“The focus of the Totem Youth Theatre Club is skill development. Theatre does really build confidence, creativity and the ability to step into someone else’s shoes.

“It also helps children to learn speech skills and projection. But the main thing is confidence and having fun with other kids,” she says.

There’s a Facebook page or you can email totemytclub@gmail.com