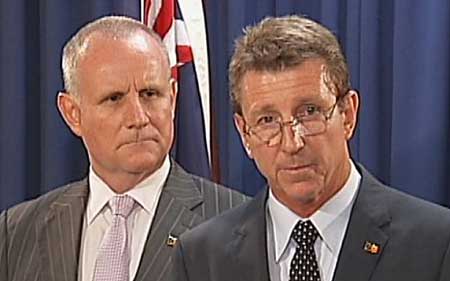 The bitter row between the police and Chief Minister Adam Giles is exacerbated by his arch foe turned deputy now stonewalling questions over allegations similar to those that have forced ex-police commissioner John McRoberts to resign: interference in an inquiry.

The difference is that in the case of former police officer and now Deputy Chief Minister, Willem Westra van Holthe, one apparent misdemeanour has been explored extensively by the Ombudsman but was not prosecuted by the police.

In the second case Mr van Holthe, after an inquiry, received an internal reprimand for releasing information to his son who was charged and found guilty of an assault, as reported by the Katherine Times on July 30, 2008.

The Times quoted Mr van Holthe: “I accept that the Police Force found that what I did was wrong. However I believed that I was acting in the best interests of my son and I make no apologies for it. What father wouldn’t do the best thing for his children?”

This came as he left the police force to become a CLP politician. While the government is subjecting Mr McRoberts to a string of inquiries, Mr van Holthe and the government seem to be making sure his past remains in the dark. What’s good for the goose isn’t good for the gander.

An Alice Springs CLP source, during last week’s demeaning political brawl, told  the Alice Springs News Online that Mr van Holthe failed to disclose his reprimand to the Katherine CLP’s preselection panel. It had given him the nod for the August 9 general election by the time the reprimand was revealed, and it was too late to change candidates.

Says our source: “As far as the party has been able to ascertain, WW was internally found to be in the wrong but as he had resigned from the police force by this time no additional repercussions ever came from it. Unfortunately police records are not publicly available and WW has been unwilling to disclose his file to the party.”

The NT News, too, referred to the car deal Ombudsman’s inquiry and the police reprimand of Mr van Holthe in its Tuesday edition this week.

In his 15 minutes of fame at the 1am media conference on Tuesday the wannabe Chief Minister promised to have a consultative government.

Apparently transparency isn’t part of that. They’ll ask you what you think but they won’t tell you what they think. Not a peep out of Mr van Holthe nor his staff in response to our enquiries about the internal police investigation. And this from the fledgling politician who pledged to take on “mismanagement or evasiveness” as the Katherine Times reported on November 12, 2008.

Of course Mr van Holthe is in good hands in an administration which relies on concealment and spin for its survival.

This is what we were told by the police media unit which we had also asked for information: “In relation to your questions, the relevant matters were subject to internal investigation and finalised through the NT Police internal disciplinary processes.

“Consistent with long-standing policy and practice, the outcomes of internal investigations are not disclosed unless they result in criminal charges.”

No explanation why these “long-standing policy and practice” are in place to keep the public in the dark – in this case concerning the person who is now the second most senior lawmaker in the Territory.

And this is what the Ombudsman told us when we asked what – if anything – had come out of his office’s thorough investigation of Mr van Holthe’s conduct (roping other police officers into his private car dealings, some of which he conducted in uniform): “Section 120 of the Ombudsman Act prohibits the disclosure of information obtained in the course of our duties to anyone, unless the disclosure is for an authorised purpose.

“As your request is not for an authorised purpose this office cannot release the requested information.”

It is instructive that informing the public about a leading politician’s record is not regarded as an “authorised purpose”.

The rift between Mr Giles and the Police Association could hardly be more serious. President Vince Kelly said this week: “The public statements made by Mr Giles in the last 48 hours has damaged all our operational members and cast public doubt over their integrity, honesty and professionalism. 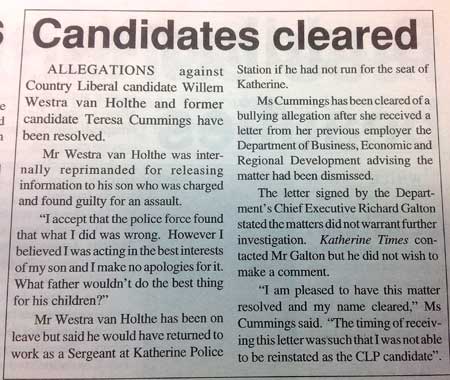 “These are the very officers who are delivering the law and order results this government is taking credit for.”

Meanwhile, clearly aiming to be a player in government business, Mr Kelly is attacking the Temporary Beat Locations (TBLs) – police presence at bottleshops which in Alice Springs have been credited with significant reductions in crime.

Says Mr Kelly: “It is our understanding that Police Officers are being taken out of critical investigative and tactical areas to maintain these TBLs.

“It is also our understanding that the TBLs are simply pushing problem drinkers from one location to another. It seems this is a bandaid measure and it is slipping.

“We are also concerned that our members do not have clear legislative powers to operate these TBLs.

“Our members deserve to have a clear power to operate TBLs if the government want this type of operation to continue,” Mr Kelly says.

“We have raised this issue with police management and Minister Chandler and have not received a satisfactory response.

“Clearly it is time to rethink the approach and make licensees responsible for their sales not professional Police Officers,” says Mr Kelly.

PHOTOS: John Elferink and Mr van Holthe as the ABC reported the coup announcement. Coverage by the Katherine Times close to the 2008 general election.