Inspiration from the roads of a big country 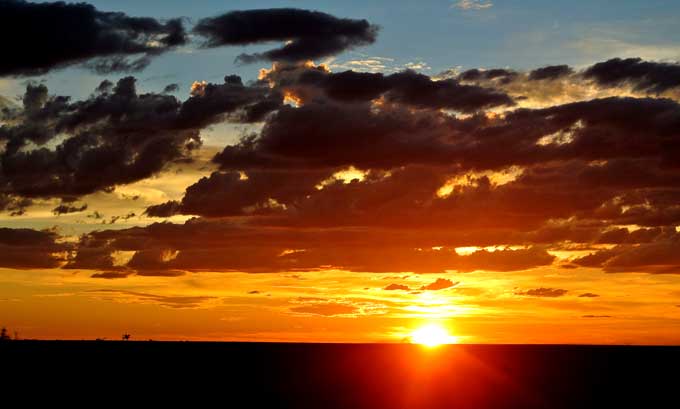 Sunset on the Barkly.

We get our underpants and televisions from China. We don’t know how to competitively build motor cars. Our submarines are expensive and no good for warfare. But there’s one thing we’re doing exceptionally well: Having a great time with mates.

Time to apply that fabulous gift to our tourism industry.

(Talking about non-renewable resources: The NT Cabinet has still not considered the Allan Hawke report on fracking, a process that will be used to produce NT natural gas, although Adam Giles, with great fanfare, ha 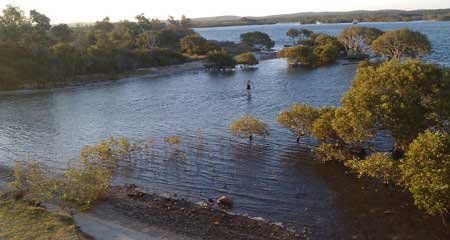 s already entered into a memorandum of understanding for its sale with the Premier of NSW, where the practice is widely reviled.

No-fuss overnighting on the banks of a tidal river at Hawkes Nest, NSW.

The report is “yet to be considered by Cabinet. That won’t happen now till sometime in the New Year for obvious reasons,” according to the Chief Minister’s minder on December 23.)

A road trip from Alice to Brisbane and Sydney (so far) has given me a few ideas about how the NT, and the rest of Australia, could turn “Holiday with a Mate” into a multi billion dollar earner, from now to eternity.

The writer has a head start with a few skills honed over decades in The Centre: Making camp (check for ants, prickles, avoid tree branches overhead); lighting a fire (small); cooking in a camp oven and on a hotplate over the coals; rolling a swag; using a star chart and, looking up, being totally amazed.

A course for beginners (all part of the deal, of course, for a fee) could be offered in the otherwise useless Desert Knowledge precinct or (marginally useful) Desert Park.

For overseas participants, camping Centre style would surely dominate their dinner conversations for the next decade, in centrally heated rooms between Stockholm and Rome, on days of rain or sleet outside, and in connection with discussion of the latest government efforts to prevent pollution from choking people to death.

TAFE Course Swagman One, given by long-time locals. Interested? Be our Mate for a Month: A better slogan than “Do the NT”.

The course may include an elective of putting the pedal to the metal in a hired Porsche or Ferrari on the no speed limit section of the Stuart Highway north of Alice Springs.

An ominous cloud just a few meters over our heads in western Queensland: We managed to out-run its rain storm.

Let’s broaden the view of possibilities even further: Per head of population Alice surely has the world’s greatest number of off-road racing experts – building machines as well as driving them. Four decades of The Finke have made sure of that.

What a nice idea for a Chinese millionaire and his mates, learning to negotiate whoops (for the uninitiated, that’s waist-high corrugations) at 150 km/h.

Central Australia is one of the world’s best places for gliding and other aerial sports.
The Larapinta Trail is waiting to be declared a world sensation, when we finally get ’round to promoting it, and equipping it with some basic services.

In that respect Parks Minister Bess Price has taken a step backwards, prohibiting campfires. It’s like the Moulin Rouge without the cancan girls. A sure bet to become one of the most ignored regulations.

Sharing their bush skills with Mates from other places would mean locals would be channeling into tourism part of the time they normally spend in their business or occupation, including the public service.

Not a worry. There are 600 people in the Alice Springs prison who are well rested, well fed, well clothed, don’t drink, don’t smoke, don’t do drugs, and are always on time: An employer’s dream.

Under John Elferink’s visionary “sentenced to a job” program they could take over some of the routine jobs, ranging from wood and metal fabrication in the prison’s several workshops, to data entry.

All it would take is a broader view by our captains of industry, currently fearful the imprisoned villains will take their business away.

Having thus blown out the European / American / Chinese / Japanese / Indian / Arabian (and so on) cobwebs, our Mates from around the world would head off in mobile homes or hire cars, adapted for the Outback’s heat and cold, and dirt roads in reasonable condition.

That mode of travel suits leisure travel: No rush, no schedule, no worries.

The trip to Tennant – a couple of days, let’s say – would amaze the escapees from the traffic jams anywhere around the world: A great road, all that land, practically no traffic, outstanding attractions, such as Native Gap, just south of Aileron, and the better-known Devils Marbles south of Tennant.

• Do something about fuel costs: For example, at Wycliffe Well it was $2.02 a litre on December 2. It’s more than just a Darwin issue – does Mr Giles have a vision for the rest of the NT?

• This one applies to all of Australia: Do we really have to drive all the way between two fences? It makes a mockery of the wide open spaces we’re promising.

We need mini parks along the roads and highways, every few dozen kilometers, a few hundred hectares, public land where you can spend a night or three, go for a stroll, watch some birds, find some bush tucker.

Over a few years we should buy back land for this from current users. It could be done compulsorily, if necessary, on the grounds of public need. After all, tourism is all we’ve got outside welfare and public service jobs. 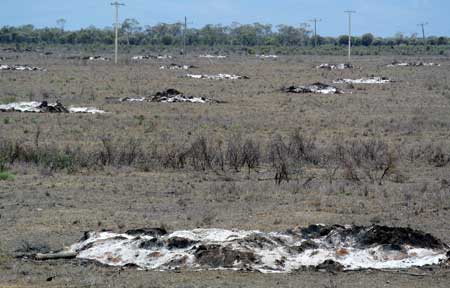 Pit that against the potential increased earnings from a few million extra tourists. It’s a no brainer.

Clearing and burning re-growth is still in use in Central Queensland to maintain pastures.

The present “rest areas” just don’t cut it: Too small, too close to the road and its noise, too many don’ts, too much used toilet paper blowing in the breeze. Some stops are barely adequate, some absolutely disgusting. Take down the stupid “no camping” signs – or take the blame if driver fatigue kills someone.

Some “to do” issues are national. Between Brisbane and Sydney the Pacific Highway traverses great forests and crosses many marvelous rivers, but there is no easy access to either.

We were enticed a couple of times to take the “scenic” or the “historic” route. Mostly they were neither. In one case we drove 35 kms between fenced paddocks, or a beautiful tidal river on one side, with just one spot were we could have pulled over and had a picnic under a shady tree. A lucky lady had beaten us to it and dropped a line into the water. There wasn’t room for two cars. 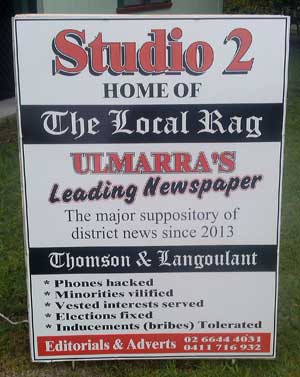 There’s a lot of the same around Australia. The only attractions are schnick-schnack shops in the little towns along the way, although some have appealing wares – or a sense of humour (see photo).

A fabulous exception was Hawks Nest south of Port Macquarie: A neat town, with a road past holiday homes to a peninsula between a river and an ocean inlet. We parked, two meters from the water’s edge, with four other RVs. Plenty of room. No charge. Facilities a couple of hundred meters away.

The next morning a council crew turned up apparently to fix a pothole. When they saw us tourists not quite ready to move on they postponed their job. It was Welcome to Oz writ large. The name of the spot is Windy Wapper. It is not advertised, so far as we could see.

The reception in another town was not so good. Again, a great lagoon, big trees providing shade, a short walk to the beautiful beach. We met several locals there who quite often spend the night.

Yet next morning a council ranger turned up, saying we could be fined $300 but he let us off with a warning “this time”. Clearly the caravan park next-door had been in touch. We could overnight at a highway rest stop, he explained.

When we checked that out, by the side of the noisy Pacific Highway, we saw a “No Camping” sign.

None of that makes any sense. Does it mean you can’t erect a tent there but you can sleep in your RV?

Caravan parks are the opposite of the Wide Open Spaces, with people squeezed in like sardines. 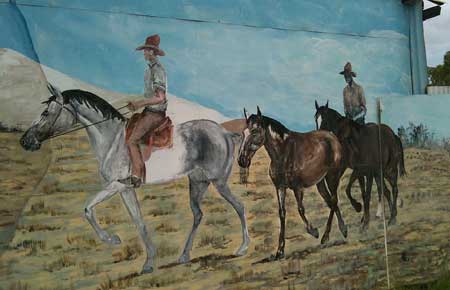 Why are travelers, especially with fully self-contained RVs, not allowed to camp overnight anywhere parking is legal?

Black and white working together in Camooweal memorial (at right and below).

Do towns not want them to call in and spend money on fuel, provisions and entertainment?
Who wins, except the caravan park owners? Of course they provide a good service – for people wanting it. We’re shooting ourselves in the foot by making its use compulsory.

But in the big picture all this is fiddlesticks. And Big it is!

Heading east across the Barkly we pulled up for the night on top of a hill. No human being, no dwelling as far as the eye could see, 360 degrees. The sunset was as alluring as it was foreboding: The red clouds slowly turned dark blue and there soon was lightning all around us.

The next morning we had to outrun a black column of water, 20 km wide, cascading from the sky, to our south, and moving towards us.

We were just fast enough for it to cross the road behind us.

Soon we had to slow down to let another storm, this time ahead of us, get out of our way, also on its path north.

The weather was so ferocious that a few days later, in the same region, a B-Double road train was blown over, injuring the driver.

It takes a while to reach the narrow band of close settlement at the eastern seaboard.

Around Barcaldine we entered Gidgee country where clearing and sowing with buffel grass – considered a scourge in South Australia (officially) and in the NT (unofficially) – was commonly used to open the country up to grazing.

Then more Mitchell grass, though with more trees than in the north west.

Has there been much clearing, we asked the Queensland Department of Agriculture: “For the most part no, but there has been some clearing in the Brigalow and Gidgee country, by landowners.

“During the Brigalow Development Scheme in the 1960s, they were required by the government to clear the land, for grazing.”

Is there more clearing going on? “Very limited and mostly to control or manage regrowth.”
The gateway from the NT to Queensland is Camooweal. It doesn’t exactly embrace visitors with both arms. Diesel was $1.92 ($1.43 at Mt Isa, 188 kms to the east on the same day). 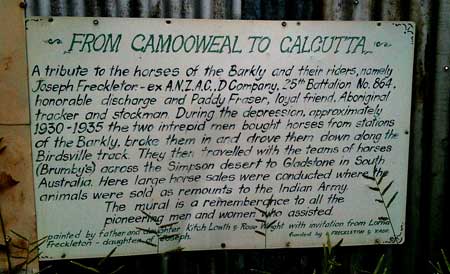 ology is perfunctory. Where is the nearest one? “Try Mt Isa.”

Yet the town of 187 people (2011 census) might have a lesson for The Alice. In a prominent mural on the main street it celebrates a story with a unifying narrative, the Depression ear Brumby droving feats by ex-ANZAC Joseph Freckleton and his Aboriginal friend and stockman Paddy Fraser.

Time to look at our history for stories that bring us, black and white Centralians together, rather than the stories that divide?

By ERWIN CHLANDA The Barkly, population 7392, has chalked up the nation’s first Regional Deal, a $78.4m joint partnership between the Australian, the NT and...
Read more
Issue 2

By ERWIN CHLANDA Chief Minister Michael Gunner is running a $60m hand-out scheme which is fully protected from actions by the Northern Territory Civil and...
Read more
Issue 1

LETTER TO THE EDITOR UPDATE, 7 January 2021, 10.42am: We are deeply disappointed by the decision not to grant bail to Julian Assange, which is an...
Read more