Tomcat and Turpentine Bush: adventures in the Tanami 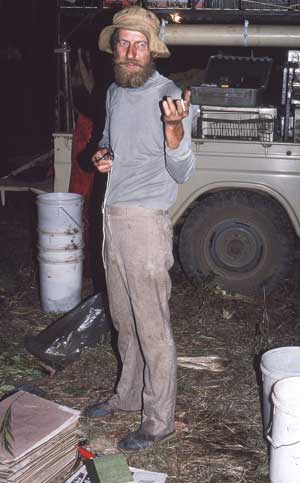 Where in the hell have those old men disappeared to? An important question, because there we were, hundreds of kilometres from anywhere, deep in the middle of the Tanami Desert, only to find that our three Aboriginal guides had just vanished into thin air!

Our leading four-wheel drive vehicle had been stopped by the 35th of the 67 flat tyres we were to receive on our trip, and while us four white scientists were busy changing the tyre, our companions had snuck away.

As it was near lunchtime, we decided that we might as well drive over to some nearby shady trees, boil the billy, and wait for our guides to return. An hour went by and because they had still not turned up, I decided to light up some spinifex, producing a pall of smoke that would mark our position.

Not much later our guides appeared out of the scrub, proudly displaying a large tomcat that they had pursued and eventually shot.

At the flat-tyre site they had seen the fresh footprints of this animal, and being born- and-bred hunters, they couldn’t help but follow its tracks for a full five kilometres, until they finally isolated it up a tree.

Feral cats are very clever animals: it would have very quickly become aware that it was being hunted and used ‘every trick in the book’ to try to evade its pursuers. It would have taken all the skills of these three superb hunters to catch this crafty animal.

We were a group of seven people, four white scientists and three traditional Aboriginal guides, using three four-wheel drive vehicles to conduct a biological survey of the north-western portion of the Tanami Desert. This was a preliminary survey to give one of our party, Dave Gibson, an idea of what lay ahead of him.

His job for the next three years was to conduct a biological survey of the whole of the Tanami Desert. This was to be no mean task, as his survey site covered an area about as big as Victoria. To make it worse, there were practically no roads in the area, little water, and lots of lovely Turpentine Bush, the world’s best tyre-killer. At this time – the year 1981 – we were very hopeful that Dave could still discover populations of some of the rare or near-extinct medium-sized mammals that had not been seen in the desert for many years.

The Tanami Desert is centred about 500 kilometres north-west of Alice Springs. It is not a true desert as it is usually quite densely vegetated, due to its relatively high rainfall of about 40mm per year. It is only after severe droughts or bush fires that it has a desert-like appearance. It is probably called a desert because early cattlemen found that most of its area consists of featureless infertile sand plains, with few permanent water bodies and so useless for cattle grazing.

While our guides were eating the lunch we had prepared for them, I let it slip that that the day marked my fortieth birthday. Ken Johnson, the leader of our expedition, proclaimed that we should cease our journey earlier than usual that afternoon, so that he could mark the occasion by preparing a birthday feast. On consulting our maps, we could see that there was a nice big swamp not that far away, so we decided that it would be our camp spot.

However the best-laid plans of mice and men often go astray: the map did not indicate the lovely thick scrubs of the dreaded Turpentine that lay in our path. Good old Turpentine, my favourite plant. Aborigines know it well; they use its wood to barb their spears. Because after it has been fire-hardened, it will pierce the toughest skin.

Unfortunately the stands of Turpentine we had to drive through had been burnt several years previously, and so the ground was covered with this lovely minefield of nice sharp fire-hardened stumps. I was in the lead vehicle and I drove very carefully and slowly, trying in vain to manoeuvre the tyres between the stumps.

We often call Turpentine the Pss-pss Bush, and this afternoon it earned its name. Every five minutes I heard the dreaded sound – pss-pss – as the air violently escaped from my pierced tyres! And the driver of the vehicle behind me swore that he definitely saw a stump that I had missed with my front tyre actually jump over to puncture my back tyre!

When we left our lunch camp we had five inflated spare tyres left; we soon used them all up, and eventually had to stop to fix four of our now ten flat tyres, before we could proceed. To add insult to injury, our tyre-fixing site was situated on a ridge, from which we could see a nice clear run down to our proposed campsite. And a nice looking campsite it was too, beautiful shady trees on the edge of a nice fresh-water swamp, which contained clear water and even small water lilies as well as brolgas and emus strutting around its edges.

Never mind, finally we made it to our destination and set up our camp. Using the last of the evening light, I raced around and collected some plants before proceeding to cook up a nice stew. While it simmered on the edge of the fire, it was back to fixing the rest of the flat tyres.

This took us longer than we thought, and just before I had finished my last tyre repair – damn, is that the smell of burning stew? Rush to the fire and pull it off, only to spill half of it into the dirt. What the hell, she’ll be right, because somehow or another Ken has managed – in between fixing tyres – to cook a birthday cake. Flour and water with some raisins and dried milk in it, but a birthday cake nonetheless.

Not much of a birthday feast, starting with half rations of burnt stew. Luckily we have birthday cake to fill up with after, can’t expect more, out here in the never-never. Pity about the cake though, looked great on the outside, just a bit runny in the middle. Who wants to celebrate one’s fortieth birthday anyway, marking the worst period in most men’s life? (The time when your body starts telling you that you are growing old, no longer allowing you to push it into doing whatever you want it to do.)

But what is that nice smell? Coming from our guides’ fire. The mouth-watering smell of freshly cooked meat. Good on you mates, what more could a man want? Being tomcat it smells a bit, but the taste – absolutely delicious! How many people can say they celebrated their fortieth birthday with a feast of fresh feral tomcat? Life isn’t so bad after all.

All in all I have had a fantastic life, very different from that of the average Australian. To cover all of it, from the beginning to now, would take much more than this series of yarns, but they are the most important parts of my life adventure, the times I have spent with the traditional owners of the Northern Territory.

Author photo by Ken Johnson, who titled it “PK Latz pontificating”. It was taken during a biological survey in the Gulf country in June 1987.

Next: Being a cowboy: not all it’s made out to be.