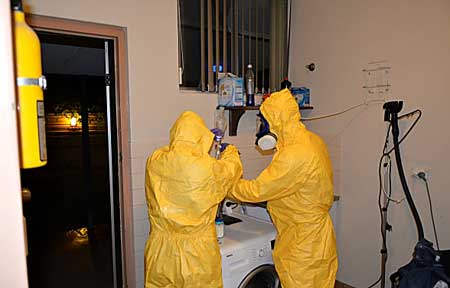 Police say they have uncovered in a suburb of Alice Springs the Territory’s biggest clandestine laboratory for the production illicit drugs.

“On entry police located a functioning illicit drug laboratory in a section of the residence. The scene was secured and additional emergency services were called to assist,” says Supt Fuller.

“A 29-year-old male was arrested and is currently assisting police with investigations.

“It is concerning that this has all occurred in a suburban residential address.

“The method used by this backyard chemist is known to have substantial risks of fire, explosion or producing harmful and potentially fatal fumes.

“Investigations are ongoing and no further information will be provided at this time.”
PHOTO courtesy police.

The Bureau of Meteorology has declared that La Niña has developed in the Pacific Ocean, upgrading La Niña alert status to an active event. This...
Read more