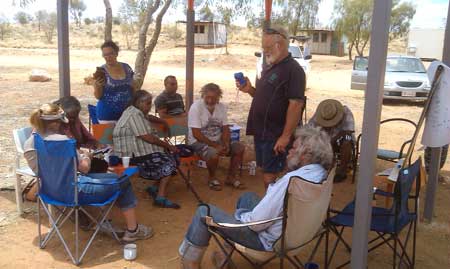 Autochthonous people from Whitegate are taking their plight to the United Nations, the USA, UK, Russia and the European Union.

If you don’t know the word autochthonous you’re in good company. It means “indigenous rather than descended from migrants or colonists”. It is in the text, prepared by legal advisors to similar movements around Australia, of Whitegate’s “declaration of sovereignty and self-determination” of the State of Undoolya.

This move may be a flight of fancy of the families owning the camp under Aboriginal law. But the group, whose despair with all the bodies set up to help them is genuine, bitter and deep, is giving it a shot, anyway.

A similar declaration was made by the Armstrong family group in January last year, for land west of Alice Springs, on the Iwupataka Land Trust, popularly known as the Golden Mile.

The NT Government  recently had the water turned off to Whitegate and told people to leave, after half a century of occupancy despite lack of a formal lease.

The sovereignty declaration was signed and sealed yesterday by a group of 12 who met in 40 degree heat under a corrugated iron shelter, in the now all but deserted camp on the eastern edge of Alice Springs. They were doing their best to keep a mangy dog and a goat away from the sandwiches they had brought for lunch.

They may not be up to speed on international law, and what the result of their application will be is anyone’s guess.

But they couldn’t be any clearer about traditional law for Whitegate: Felicity Hayes, the most senior person, has in her head the precise sequence of power transfers over generations.

All other members defer to her.

She leaves no doubt that this order is more important than money or non-Aboriginal arrangements.

She is happy to explain the complicated structure of responsibilities, and to assist understanding refers to a diagram in a book published by IAD press, Kin and Skin.

That she means business was underscored on Wednesday when Mrs Hayes and several other Whitegate people plus supporters, fronted up at the Convention Centre where 25 to 30 members of the town’s Mbantua moiety were holding a meeting. Apparently it was going to deal with Whitegate land issues.

According to two witnesses, Connie Craig and Frank Ansell, Mrs Hayes walked into the room and announced that the meeting was over. 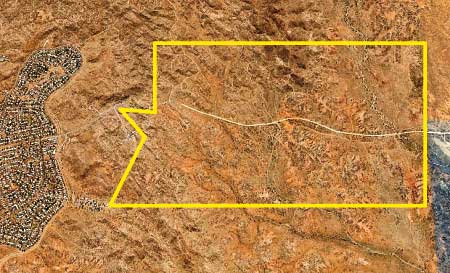 She accused people at the meeting, Ian Conway and Rosalie Kunoth Monks – an activist of national acclaim – that they had no traditional right to meddle in Whitegate affairs.

The Mbantua members accepted the verdict and stopped the meeting.

I asked Mrs Hayes yesterday whether this was an accurate account of the events and she confirmed it was.

The case bears the name of Mrs Hayes’s aunt, Myra, who was a long time resident at Whitegate. 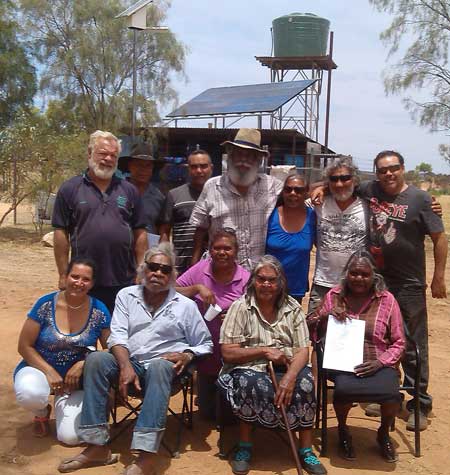 Mrs Hayes also says her group will have nothing to do with the so-called National Summit for Freedom to be held in Alice Springs next week, run by interstate activists Tauto Sansbury, Geoff Clark and Michael Mansell.

The Alice Springs News Online has left messages for Mr Conway and Mrs Kunoth-Monks to offer right of reply, but has not received responses so far. We will report any responses when and if they are received.

PHOTOS (from top): The meeting yesterday • Mrs Hayes with a map of the area the group is seeking sovereignty over • The area, east of Alice Springs. It is about 3km long and 2km wide.  The general area was once considered by a previous NT government for a new suburb. Mrs Hays says leasing some of it for housing could be considered if the group gets control • The group. In the background it Whitegate’s water tank – now no longer connected to a pipe.