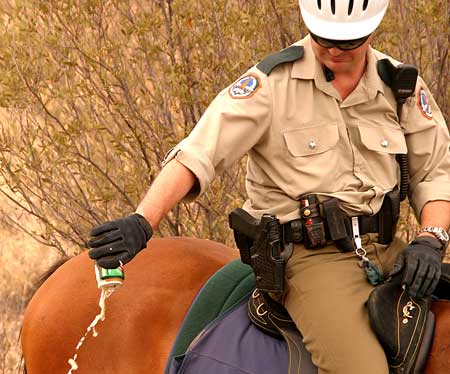 This is what the plan looked like when Health Minister Robyn Lambley spoke to the Alice Springs News Online in April last year: “Once [a] person has been brought into protective custody for the third time in two months, by the police, he will not be able to leave protective custody. He will be handed over by the police to an assessment service.

“Then he will be brought before a tribunal and – if it sees fit – he will be taken to the rehabilitation service. There will be no opportunity for that person to choose to attend or not to attend.

“He will be fully supervised throughout that process. Once he gets into rehabilitation and he chooses to abscond, he will become the responsibility of the police which will attempt to find that person.

“If the rehab place won’t take him back then he will go before a court which may sentence him to prison.”

NEWS: It’s not just an invitation. You’re saying to them, like it or not, you’re in there for three months.

A rehabilitation order can still be made but the threat of prison if the person absconds from a treatment facility is being removed.

However, as Ms Lambley explains today: “As soon as someone absconds, the clock will stop, and when they come back again, and they will – all the people who had absconded were returned – the clock will start again.

“They may run away but they will not receive any less mandatory treatment time than was prescribed by the tribunal.”

Under the system now being modified, the mandated treatment process was prone to come to an end if the person absconded – albeit he or she could land in jail.

But after legislative amendments this month the process will continue as soon as the problem drinker is apprehended again.

How often that clock will stop and start ticking is something that remains to be seen.

The problem is back to where it was in the lead-up to the 2012 Territory election when getting tough on drunks was a key plank in the CLP platform, and when the rehab facilities had revolving doors. At the end of the day the choice of getting rehab or not is once again up to drunks, not the authorities. 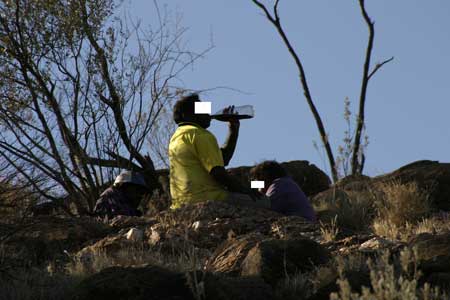 On the other hand the number of people who can initiate AMT is now being broadened to social workers and others in what’s turned into an industry of dealing with the dark side of booze.

The operative word in Ms Lambley’s statement last year clearly was the court may send absconders to prison.

In fact, all of the 10 people who were put before the court for absconding received fines, not jail terms. The Minister, of course, has no power over this.

(We have asked how many of these fines have been paid and will report the answer when it comes to hand. Attorney General John Elferink says almost $50m in fines are outstanding in the Territory.)

Clearly, the public’s hope of getting rowdy drunks out of their face was too big an ask.

He says drunks being assessed for treatment are detained for up to 14 days “at a facility hard to escape from”. (However, if they do, see above.)

That leaves what Dr Boffa calls “internal motivation” as the deciding factor for a drunk getting rehab – one who doesn’t want to reform, won’t.

“If someone after two weeks drying out and assessment hasn’t decided to stay in treatment, then the chances of the treatment being effective are very remote,” says Dr Boffa.

“Most people” after two weeks are deciding to stay in treatment.

Was it not the initial objective of the scheme to target people who do not want to be cured or reformed? People can now walk away from AMT.

Dr Boffa: “They can, after a period of time, but the point I’m making, I think 70% of people won’t. They will, hopefully, be motivated by the initial treatment and will voluntarily stay in treatment. If so this would be a very important outcome.”

The new rules are still “a process that initially does not have the consent of the patient, it is a treatment process that is mandated.

“It is new ground, it has not been tried in very many parts of the world, but it is no longer a criminal process. We are not sure how effective it is going to be.

“For those who decide not to stay in treatment the solution is to reduce supply, so they can’t get access to cheap bulk grog, and make sure, hopefully in the future, to have photo licensing, until these people do decide they want to do something about their problems.”

Dr Boffa says the current policy of having cops at bottle shops is a very successful supply limitation strategy.

Were the initial rules just too hard to enforce? People were absconding and getting away with it.

Dr Boffa: “It’s fair enough to say the facilities that were being built are not prisons, which is good, because you wouldn’t want them to be. It was too hard to track them and bring them back.

“Mandatory treatment will still target people who don’t want change. They will be referred to mandatory assessment.”

But with the teeth of the law gone, it will be interesting to see how many will choose the path to the ATM rather than the AMT.