Current council could get extra year in power 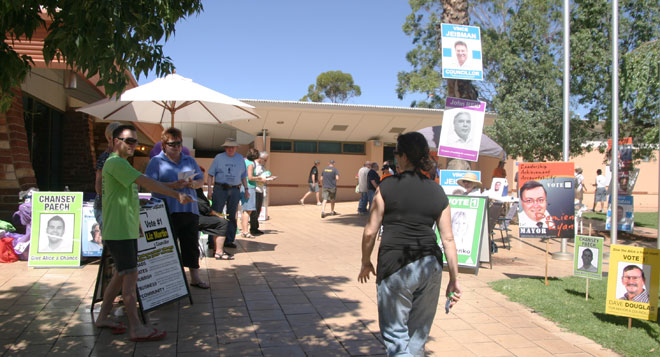 The current Town Council could get an extra year in power if proposed reforms to local government elections go through. And municipal councils could in future appoint their mayor (“principal member”), rather than have the people elect her or him.

A letter from the Chief Minister, who is also Minister for Local Government and Regions, was distributed during last night’s council meeting. It outlined recommendations from the NT Electoral Commission (NTEC) “aimed at improving the administration of local government elections” in the NT.

• a change to the timing of the next general election to 2017 (and every four years after that).

• fixing polling day to the fourth Saturday of August.

• extending the period in which casual vacancies can be filled by appointment (rather than by-election) to 18 months out from the next general election.

• councils to choose to conduct by-elections themselves or by an external election service provider or the NTEC.

• municipal councils to conduct by-elections by postal voting only;

• municipal councils to choose whether to appoint or have elected the principal member (mayor).

The letter asked council to contact the Chief Minister’s department to arrange discussion of the reforms.