Beats at bottleshops to stay 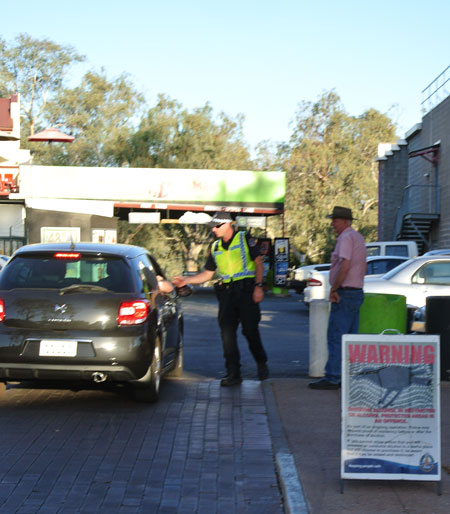 “I think I’d be losing my job if I said we’re not going to be doing TBLs.”

Alice Springs Police Commander Kate Vanderlaan was speaking to the Town Council. TBLs stands for ‘Temporary Beat Locations’ and it seems there will be nothing temporary about them.

They involve police standing outside bottleshops and asking intending purchasers where their alcohol will be drunk, as it is an offence – as specified by the controversial ‘black crow’ signs – to drink alcohol in restricted or alcohol protected areas. These include public places throughout the town and Aboriginal town camps.

It is up to the intending buyer to demonstrate that the alcohol will not be drunk in such places. In their enquiries police may decide to demand proof of address. If the person goes ahead and buys the alcohol anyway, police may seize and destroy it.

The strategy has been credited with a significant downturn in violent crime including domestic violence, reiterated by Cdr Vanderlaan last night. (See previously reported comments by Central Australian Aboriginal Congress.)

Cdr Vanderlaan said manning the TBLs comes second only to the patrol vehicles. As a consequence foot patrols may suffer.

She said foot patrols, together with better inter-agency collaboration, are the police’s main strategies to deal with youth issues.

She said youth whom the foot patrols deal with are often not committing crimes but by hanging around in parts of the CBD and sniffing volatile substances they create an experience of “unsafeness” for others.

She described police relationships with other agencies – government and non-government – as “very strong”, particularly following a police initiative to get regular meetings happening.

She said CAYLUS (Tangentyere Council’s Central Australian Youth Link Up Service) takes the lead in policy with regard to inhalants and deals with supermarkets on the issue, including by funding cabinets for the secure storage of spraycan deodorants.

She said one young person using volatile substances in recent times was taking others along with her. She was ordered into mandatory treatment but a “lot of hoops” had to be jumped through in the process.

She said police will be involved in summer holiday programs for youth, with the lead being taken by the Department of the Chief Minister.

Cdr Vanderlaan claimed “good results” in reducing “volume crime”: unlawful entries are “the best they’ve been in 14 years”, down by 30%. She said there were six in Alice Springs last week; none at all over the weekend.