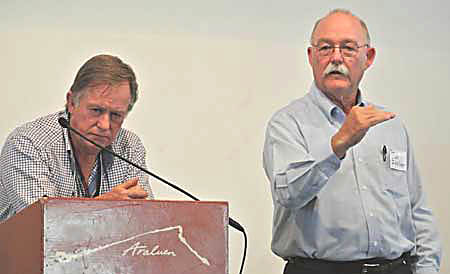 The answer from two academics to the question posed by the Strehlow Conference 2014, Where to from here? is not what most people would be happy to hear.

Rolf Gerritsen (at left in the photo) says there is no end in sight to the “covert resistance” displayed by Aborigines towards whitefellers’ efforts – however earnest – to Close The Gap.

And Don Zoellner (at right in the photo) suggests the ballooning spend for a deliberate policy of fixing social problems though the justice system is driving the Northern Territory towards a financial abyss.

Prof Gerritson and Dr Zoellner yesterday kicked off the sharp end of the three day conference in Alice Springs with a chilling double act: one outlining society’s efforts at racial harmony sabotaged by Aborigines disinclined to being bossed around, and the other pencilling the numbers into that picture.

“We worry about our children, their education, are they going to go to uni, take their medicine – we are very different,” said Prof Gerritsen.

“Our” institutions are based on those expectations – a hopeless fit for people not used to large communities. Our institutions are not geared to the needs of small groups surviving in their localities.

Aborigines are pushed by white institutions to adapt to their purposes, “requiring them to become like us,” – and they don’t like it, which is paraphrased as dysfunction.

There is tension between families and distribution coalitions: “The Aboriginal world is one of turmoil and strain,” says Prof Gerritsen. 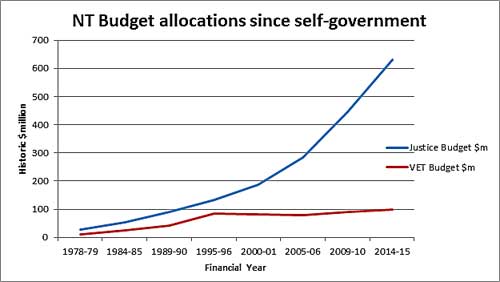 “Have you ever been to a community where people are saying kids shouldn’t go to school?

He draws parallels with Europe in World War II. His parents were young adults in German-occupied Holland: “What do you do when your country is conquered?”

There were collaborators and resisters – actually most people were a bit of both.

“You collaborate by acquiescing. You resist by putting sugar into the petrol tank of a German truck. Daily life was a whole set of compromises, of your integrity, of your self-esteem, because in many ways you had no choice.”

Arnold Joseph Toynbee wrote about Jewish zealots who couldn’t resist the Roman Empire overtly: “They resisted covertly by retreating into their Jewish beliefs and intensifying their observance of them, emphasising their separateness.”

The others copied the Romans. 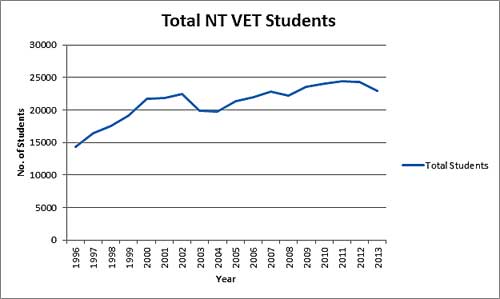 Parallels in the freshly occupied Centre were found in the “Faustian bargain” of Aborigines joining the native police: once the Europeans stopped biffing their people they were quite happy to biff someone else. Better access to women was one reward for young black men.

Prof Gerritsen says the zealot phase for today’s young men lasts from 14 or 15 until the mid-thirties. Misbehaviour, withdrawal from the system, are the manifestations, driving an unregistered vehicle, having no driver’s licence, accumulating enough fines to go to jail – a form of resistance, “confirming their reaction to what we want them to do. It is covert resistance to what the white society has in mind for them, what the white government is doing to them.”

There are lots of ways for “stuffing the whitefeller around”: in 2012 the Aboriginal vote swung away from Labour, in some places up to 30%, although the CLP didn’t mention the bush very much.

In 2013 the vote swung back the other way,  to “Wozza” (Warren Snowdon) who’s represented the electorate “for 20 years too long”.

“We are going to bugger you around because you are not listening to us,” is “their” general message. “It’s putting sugar into our petrol tank.”

The “mechanisms of resistance” are deliberate bad behaviour: “You shouldn’t play cards? They are going to play cards because they know it grinds the whitefellas’ nuts.”

As capitalist Methodists at heart whitefellas are against drinking, and so drinking for Aborigines becomes a “deliberate rejection of the conquerer’s oversight”. 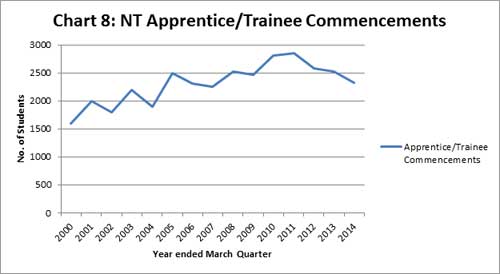 Don’t go to the clinic when you are sick. Terrible statistics for Aboriginal males in their middle age are the consequence.

On the other hand there is re-establishment of traditional control, such as initiations, attempts by tribal people to regain control, focussing on family, going away on ceremonies, putting their own priorities ahead of the government’s: a form of resistance.

Prof Gerritson says Aborigines “hold in their hand a veto over us, they are buggering us around”.

We want all Aboriginal people to have jobs, and when the statistics look bad, this covert resistance puts pressure on us. Coercive methods such a basics card and imprisonment, play right into their hands.

“The way forward is for us to keep stuffing around for another 10 years, then allow the blackfellas to sort out a way forward,” says Prof Gerritsen.

Dr Zoellner deals in the stark statistics of the – bipartisan yet clearly hapless – Territory policies of lock ’em all up.

The constant baying for skilled labour notwithstanding, successive NT governments have used the justice system as a mechanism to manage the population, at the expense of Vocational Education and Training (VET): Iimprisonment is the “preferred method of dealing with problematic parts of the population, the lower socio-economic portion.” 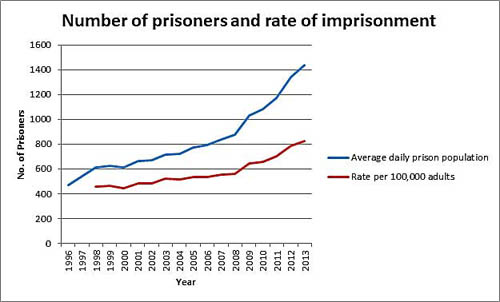 In the NT locking people up has become, more and more, “the first line of defence for a whole host of issues that were formerly [dealt with] by social interventions as opposed to incarceration”.

Dr Zoellner is looking at the numbers from a convenient zero starting point of 1978, when self-government started in the NT.

Why VET vs the justice system? “They are probably the only two policy levers that are actually controlled by the NT Government” while university places and social welfare are Commonwealth decisions, he says.

He has plotted VET dollars against justice dollars. “Justice” includes the Department of Justice, police, law courts and prisons. It is recurrent expenditure only. Capital expenditure, such as the extensions to the Alice Springs prison and the new jail built for half a billion dollars in the Top End, is not included.

“Socialising” youth and other unemployment, social problems generally, can be achieved in a number of ways, most of them more expensive than the dole, but cosmetically appealing and tacitly consented to by the taxpayer:-
• raising school leaving age;
• age pension;
• uncapping university places, (soaking up 210,000 people in the first decade this century);
• medicalisation (Commonwealth) by skyrocketing numbers of disability support pensioners (one third psychological and psychiatric), with 36% of the entrants coming off the New Start (dole) system;
• imprisonment.

The graphs tell the story.

Dr Zoellner says the public policy of exponential growth in expenditure of the justice system is really concerning: “I don’t know how you find the off button to this trend, not even the slow-down button.”