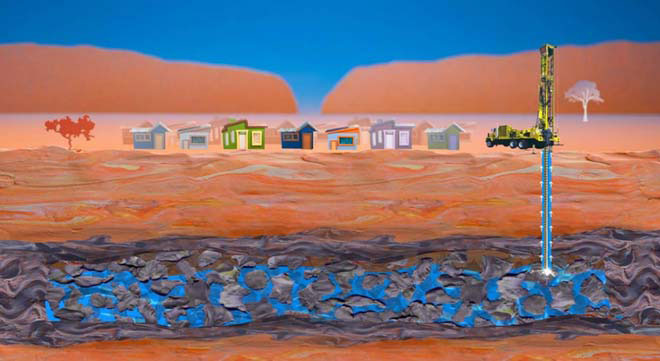 Alice Springs gets its water from underground. What risk could fracking pose? Image: www.alicewatersmart.com.au

The Town Council has been asked to write to the NT Government to ask for a guarantee that the existing Alice Springs water supply is protected from shale gas exploration in the region. Such a guarantee should include an outline of the evidence on which it is based.

The request came from director of the Arid Lands Environment Centre (ALEC), Jimmy Cocking, who spoke to council last night on the controversial issue of fracking – the method by which shale gas is extracted.

Council, which heard recently the case for fracking from the resources company Santos, wants to hear from an independent scientist before making up their mind on the request.

The thrust of Mr Cocking’s presentation is that the community does not know the answers to important questions, chief among them “How close is too close?”. The proposed Dingo Gasfield is within 50 kilometres of the town, he said. Is that a safe distance? Rocky Hill, a possible future source of water for the town, is even closer to Dingo: “How much risk are we prepared to take?” 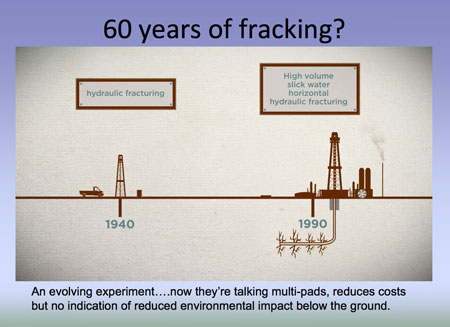 He pointed out that mining, gas and petroleum activities are exempted from the Water Act and are not included in water planning activities. And this comes in the context of the Alice Springs Water Allocation Plan being redrafted, with a likely reduction of the consumptive life of the aquifer from 320 years to 200 years.

Right: Deeper, horizontal fracking has only been around since the 1990s. Image from Mr Cocking’s presentation.

He provided councillors with a long list of chemicals used in the fracking process, 650 of which contain hazardous substances. The process also uses between eight and 40ML of water per frack, that is between three and 16 Olympic-size pools, he said.

Council would not be alone in acting, he said: almost 50 other councils around Australia have expressed concern about or opposition to fracking.

If councillors wanted more information, her urged them to google ‘fraCKing’, not ‘fraCCing’, which yields very different results. He also said some of the best information on the process can be found in the submissions to the NT’s Hydraulic Fracturing Inquiry. ALEC and others have called for a moratorium on all exploration licence approvals until the findings of the inquiry are presented publicly.

Discussion of Mr Cocking’s request came at the end of the meeting, by which time he had left the chamber.

Councillor Eli Melky thought it was a “no brainer” to support it. Drilling has to go through the water table to get to the gas: “That’s problematic” in his view.

Cr Steve Brown was vehemently opposed to the request, going so far as to describe it as “mischief making” and suggesting that  ALEC is just trying to “get in the face” of the NT Government because of the cuts to its funding.

Cr Jade Kudrenko rejected that view and said it should not be the view of council. She said a large number of people in Alice Springs are concerned about the issue and that she has not been reassured by the information she has heard thus far.

Officers will try to organise a scientist to make a presentation at the October round of committee meetings.