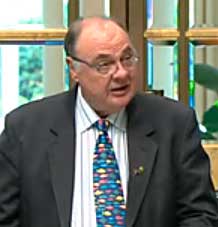 Improvements of road, rail and natural gas infrastructure in Central Australia are prominent in the final report of the Inquiry into the Development of Northern Australia tabled by MHR Warren Entsch (pictured) in Federal Parliament yesterday.

However, under the headings Water Capture and Storage Infrastructure, Aquifer Management and Agricultural Development Schemes, The Centre doesn’t rate a mention.

• Tanami Road: Halls Creek to Yuendumu — upgrading a 750 km section at an estimated total cost of up to $1 billion would provide a freight corridor from the Kimberley region to southern markets, reduce mining operating costs, secure strategic defence interests, and improve safety and access for tourism. Federal funding of $110,000 is required to assess the feasibility of development as a toll road.

• Darwin to Alice Springs Upgrade: The construction of the rail link in 2004 has opened opportunities for the mining sector. It was noted, however that the single rail line does not have heavy-load bearing capacity and there is limited capability to meet expanded freight demands.

To support growth, passing lanes are required on the rail link and bulk handling facilities at Darwin’s multi-user port should be upgraded to address loading bottlenecks.

The 600 km Tennant Creek to Mount Isa link would provide alternative and direct access to markets north of Darwin for minerals or primary produce and enhance regional mining development around Wonorah near Tennant Creek and Burketown in Queensland.

Further investment would be required to extend the existing eastern rail corridor direct to Townsville Port, to address existing bottlenecks associated with its present conclusion at Stuart, a suburb just west of Townsville.

With respect to energy developments the report says there are major natural gas deposits, including “unconventional” ones requiring franking, mostly north of the Tropic of Capricorn.

• National Gas Grid Development: Infrastructure linking the Northern Territory gas pipeline to the Eastern gas grid was identified as a priority to capitalise on the Territory’s unconventional gas resources. The pipeline link from Alice Springs to Moomba would be part of the project.

Additional proposals for development of west–east links in a national gas grid includes a pipeline from Tennant Creek to Mount Isa and the consideration of a gas line from Darwin to LNG developments near the Aboriginal centre of Wadeye in Western Australia, and on through to New South Wales.

The APA Group (a major natural gas infrastructure business) has invested $2 million in a feasibility study into the gas grid development. Additional support from the Federal Government was sought.

Government support for research and innovation in the sector would stimulate micro-business diversification, and secure Aboriginal and Torres Strait Islander engagement.