Work for the dole at golf club: sounds good on paper only

ABOVE: Golf club member and volunteer Dave Ross fixing up mess left by work for the dole scheme participants.

The Abbott Government’s work for the dole scheme, due to be rolled out nationally, will make a hilarious script for a sitcom if the trial in Alice Springs is any indication.

“Workers” placed in jobs don’t turn up about half the time. When they do they are often late or leave early. The work they are doing is frequently sloppy and needs to be re-done.

Yet no expense seems to be spared: in Alice Springs – one of 18 trial sites around the nation – there is not just one but four private enterprise job agencies involved in the scheme.

They are being paid undisclosed fees, apparently whether or not the workers turn up.

There are paid supervisors frequently without anyone to supervise, because workers don’t turn up.

The Alice Springs Golf Club (Google earth shot above) was started on the scheme in late June, with five places.

President Steve O’Burtil says the workers are scheduled to be there Mondays and Tuesdays. 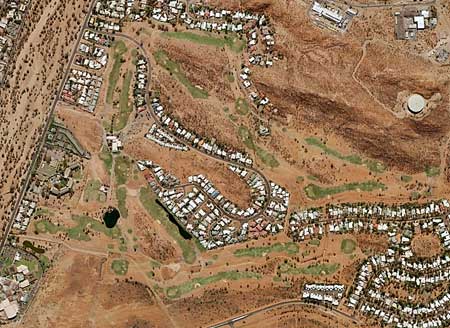 “There are different people every day” and this makes it difficult for the jobless to learn skills, and impossible to manage the tasks efficiently.

For example, a paint job to spruce up the club for the Maters Games had to be re-done by a club member.

Other jobs had to be completed by working bees of members.

The club says the only person turning up regularly has found a job and is no longer part of the scheme. At least that is a success story.

Stewart Williams, of My Pathways, one of the job agencies hired by the Federal government for the scheme in Alice Springs, says one man turned up late because of “climatic conditions”.

We pointed out to him that The Centre has been having magnificent, sunny winter weather.

Mr Williams: “It was too cold for him.”

Neither Mr Williams nor the media officers of the Department of Employment and Centrelink would answer the following questions about the golf club issues, either because the subjects are “commercial in confidence” or “considerations of privacy” rule out replies:-