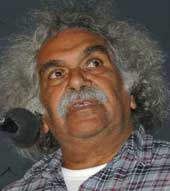 Central Land Council chairman Maurie Ryan says he has been stood down again but stressed “I am not giving up, I am not standing aside”.

He said he is the CLC’s Lazarus and despite having been at the head the organisation for some time, he described it as a “carcass infested by parasitical vermin”.

Where is all the cattle company and Centrecorp money, he asked in a phone call with the Alice Springs News Online, and accused the CLC of being a gatekeeper for the Labor Party.

The News was told by a source, speaking on condition of not being named, that the standing-down had been carried out by the organisation’s executive, and that a special general meeting would be held to ratify the sacking.

A media officer of the CLC said in accordance with the recent directive of the full council, only it could make statements about issues relating to Mr Ryan.

She said the council’s next ordinary meeting would be held in November and a special meeting in September.