Councillor Steve Brown (left), chairing the Town Council’s Seniors Coordinating Committee, advised the meeting from the chair that a funding application is in the pipeline for a retirement village at White Gums. This was a clear case of conflict of interest, argued Cr Eli Melky (right) at last night’s council meeting, and wanted to know how it could have gone unchallenged.

Cr Brown was absent from the council meeting due to personal commitments. Cr Melky signalled that he would be raising the matter again at the end of month meeting.

Cr Brown’s statement was recorded in the minutes of the Seniors meeting, referring to business arising from previous minutes and under the heading “Housing for Self-funded Retirees Survey”.

CEO Rex Mooney, who was present at the Seniors meeting, said that Cr Brown had made the statement without further commentary from him or anyone else and the meeting had moved on.

Cr Brown rejects Cr Melky’s comment as “nothing more than grandstanding of the sort we’ve come to expect from him”.

When the Alice Springs News Online contacted him this morning, Cr Brown said the intention of council’s survey was to attract – “in the public interest” – retirement village packages and he had referred to the White Gums application as an example of this.

He said the application has not even had approval yet – it comes before the Development Consent Authority tomorrow. He said he had nothing to gain from mentioning it, it was merely a matter of public information and therefore no conflict of interest exists. 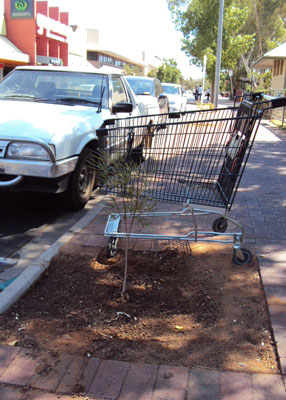 The Town Council may establish a tree farm inside a secure enclosure at Albrecht Oval for growing street trees to greater maturity before planting. The move is aimed at combating the loss of up to half of all street trees planted due to vandalism in the main (30%) but also to environmental factors, shock and theft.

Left: Vulnerable young tree in Hartley Street. Tree guards have since been added. Photo from our archive.

Council’s experience is that planting trees greater than three metres in height protects them from vandalism and theft. As well, growing them to maturity in local environmental conditions will increase their chance of survival.

There is already a turf farm at Albrecht Oval where the tree farm is likely to be located. At last night’s committee meeting the proposal was positively received by councillors, although Cr Eli Melky challenged the suggestion that it would have nil financial impact in council’s budget. Councillors asked for more information in this regard.

No objection to cinema’s application for a liquor licence

Councillors did not discuss an application by the Alice Springs Cinema for a seven-day a week liquor licence for on premise trading. The recommendation from officers was that council not object (this is a default recommendation) and as no-one demurred that will be the position conveyed to NT Gambling and Licensing Services.

The cinema wants to be able to sell alcohol to patrons for one hour prior to and thirty minutes after the session time printed on a valid ticket, between noon and midnight.

Right: Liquor was sold at the Sydney Travelling Film Festival held at Alice Springs Cinema for the first time this year.

The liquor sold will be: beer in cans and bottles; cider in bottles; wine and sparkling wine by the glass; pre-mixed drinks in single-serve bottles; and for “gold class” and special events only, wine by the bottle and spirits and cocktails.

The application says that the cinema will take a phased approach to its alcohol sales. In phase one, drinks will only be available at special events.

In phase two, to be implemented “mid to late 2014”, alcohol will be available to all patrons at all sessions except where restrictions apply, including no sales for patrons of children’s and family movies.

Phase three – the gold class service – will be introduced in late 2014. It will offer table-type service for special gold class seats, including snacks, meals and desserts, and a small lounge area for gold class customers prior to the movie.

Comments on the application are due by COB 24 August.