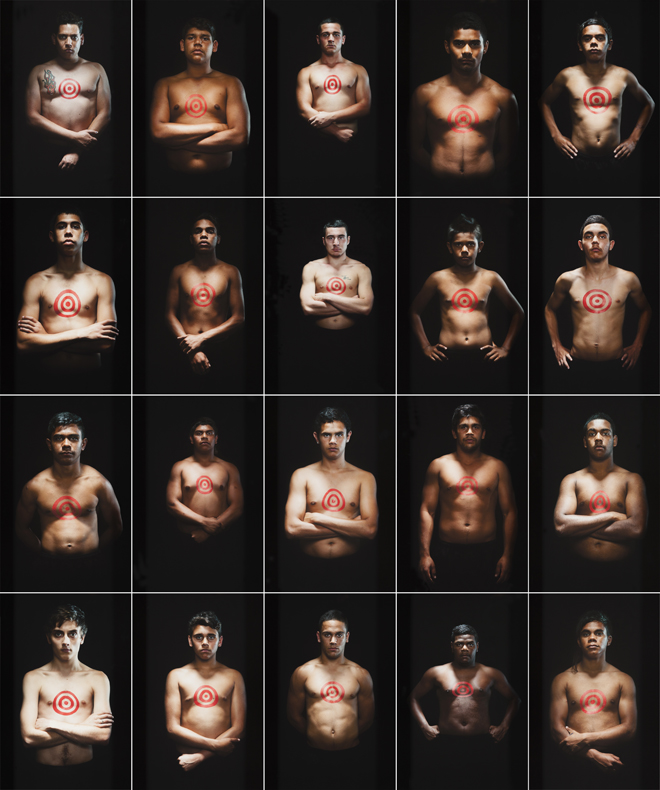 Above: The winning work, We Can Be Heroes by Tony Albert .

Queensland artist Tony Albert has been awarded the top prize at the 31st Telstra National Aboriginal and Torres Straiit Islander Art Awards for his confronting series of photos that reveals the strong connection to community by young Indigenous men living in Sydney.

Northern Territory Minister for Community Services, Bess Price, congratulated Mr Albert for his work We Can Be Heroes, which stems from his new series Brothers. Itwas inspired by events that took place in Sydney’s Kings Cross in April 2012 that involved a non-fatal police shooting of two Indigenous boys.

We Can Be Heroes was selected from a field of 65 finalists and this winning image of 20 uniformly photographed young men with a red target painted on their bare chests shows them to be defiant, proud and strong. 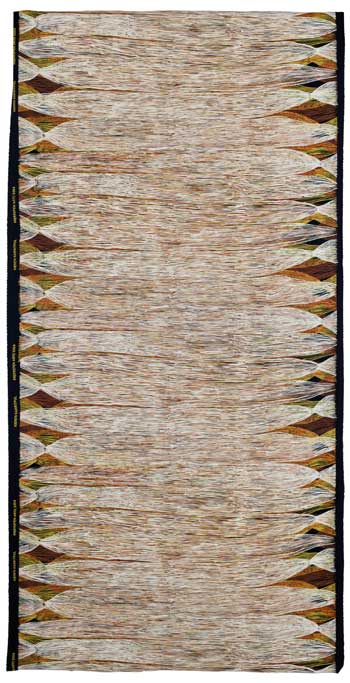 “The Northern Territory Government is proud of its long standing partnership with Telstra in supporting and celebrating Indigenous artists, many from our remote communities, through NATSIAA,” Mrs Price said.

“This partnership has grown this year with total prize money increasing from $60,000 to $75,000 and includes a new $5,000 youth category in 2014, which I am delighted to announce has been won by 20-year-old Kieren Karritpul (below right) from Daly River, Northern Territory.

“Kieren’s work Yerrgi (left) tells the story of his time growing up watching his mother, grandmother and aunties collecting yerrgi for weaving baskets and mats and uses acrylic on linen to illustrate this story.

“This is a wonderful story about our Northern Territory culture in our communities that will be showcased to a huge audience. It is also a fantastic opportunity for Kieren that will open up many doors should he wish to pursue a career in the arts.”

Now in its 31st year, the Telstra Art Award is the longest-running art award dedicated to the work of Aboriginal and Torres Strait Islander artists, and has come to be regarded as one of the premier national events in the Australian Indigenous art community. 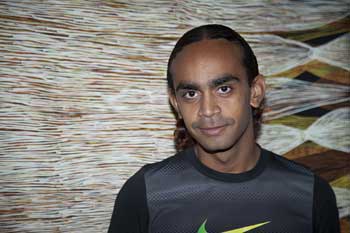 This year the Youth Award was introduced for the first time and attracted 22 of the 306 entries.

Photos courtesy Museum and Art Gallery of the Northern Territory.