Stuart is holding the wrong rifle 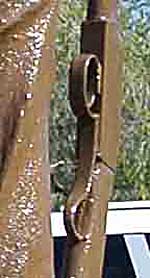 Just as you thought the row over the Stuart statue is all over, gun enthusiast Des Nelson has discovered the weapon the explorer is holding – the subject of so much criticism – is the wrong one.

The British army adopted the Martini in 1871, says Mr Nelson. His information comes from the book Guns, by Fredrick Wilkinson.

The Martini had a lever action similar to the American Winchester but was a single-shot weapon and had no external hammer.

When the Martini lever was pulled down the gun’s block dropped down, the bullet could be slid into the chamber, and pulling the lever back up made the weapon ready for firing.

“All the fuss about the rifle and it’s the wrong one,” says Mr Nelson.

By ERWIN CHLANDA “The industry is on its knees. We are basically in our darkest hour.” Patrick Bedford (pictured) became chairman of Tourism Central Australia (TCA)...
Read more
Issue 30

By KIERAN FINNANE “You can find yourself freely, rolling on four wheels. It’s a self discipline thing to do. It’s also some form of mediation...
Read more
Issue 30

By KIERAN FINNANE The acronym, CARGO, sounds cultish; the branding of priorities, “the Fantastic Five”, sounds like a kids’ adventure story, but behind them is...
Read more