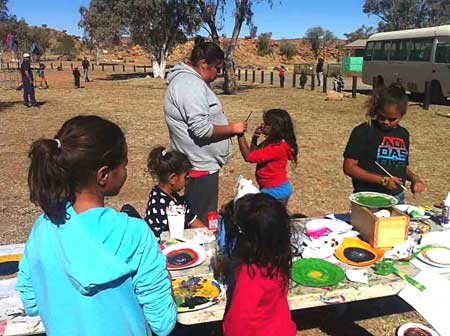 Youth advocates are saying the latest round of cuts to youth programs at the beginning of the year are now being felt on the ground.

“It is widely known that youth activity at night is an issue,” says Tristan Ray from the Central Australian Youth Link Up Service (CAYLUS), “particularly during school holidays and long weekends.”

Still, the Youth Street Outreach Service that operated seven days a week and the Alice Springs Youth Hub were defunded at the start of this year. Chief Minister Adam Giles told the ABC on January 31: “The town is completely cleaned up.”

Last week Alice Springs News Online revealed a letter from the Northern Territory Police showing the figures for youth disturbances spiked during the Easter school holidays and the concern is that these numbers will be repeated this time around.

It seems the government has “a policy of if it’s broke – slash it,” youth advocates say.

Youth advocate Matty Day says that too often is funding to youth programs and services vulnerable to political ideologies and that kind of “head in the sky thinking” is coming at a cost to the most vulnerable on the ground.

“Both parties are guilty of doing it,” says Mr Day. “Political cycles have a major effect on young people. These programs are too often cut short when they need more time to develop and build capacity.”

In last week’s interview with the News Mr Giles said his government is pursuing “a parental responsibility model” to curve youth night activity.

“It’s not the responsibility of police or government agencies to transport kids home,” said Mr Giles. “It’s the parents responsibility.”

Town Councillor Chansey Paech says there are “many reasons why parents may not be able to transport their kids home.

“These kids are scared and vulnerable and are unlikely to engage police for a ride home,” he said.

Cr Paech expressed concern at Mr Giles’ suggestion that responsible members of public such as councillors should offer children a ride home: “It’s a huge safety concern. Is Adam Giles suggesting that kids should get in the car with strangers?

“The current government is clearly not concerned about youth issues,” Cr Paech says. “The continuation of defunding these programs is evident and people are screaming out for youth services.”

Cr Peach also rejected claims by Mr Giles that he was playing political games: “If referring to community safety is a political game, I’m not sure what planet he is on. As a Councillor I am concerned about public safety.” 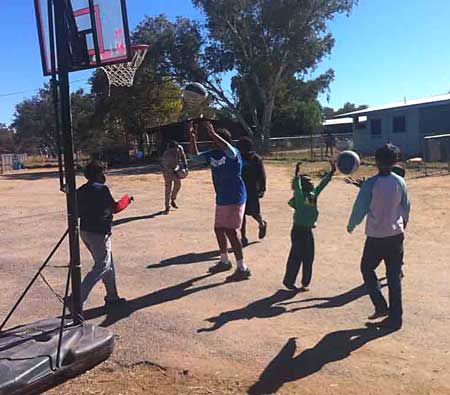 Mr Giles justified cuts to youth services suggesting that some programs and services were inefficient and there was overlap between service providers.

Says Mr Ray: “There are programs that have been more or less successful … but even with less success they were doing something. I would like to know what people are suggesting as an alternative? No programs is not alternative.”

The success and importance of youth programs is perhaps understated, but for 12-year-old Taylor, who attended the second of four BBQs (pictures) arranged by the police, NGOs and assisted by the Rotary Club of Stuart at town camps during the holidays, the activities are clearly enjoyable.

“I love art,” says Taylor, one of the 30 children who attended the event at Hoppy’s camp. Other children joined her in painting, shooting hoops, drumming or playing cricket.

Taylor says that although she likes school, she has had good school holidays, going to the movies the other day and playing touch football with friends.

Glenn Warrior, a Youth Engagement Police Officer, who co-ordinates the town camp events, says the NT police are working closely with a handful of government and non-government organisations to take on a preventative approach and build relationships within the community.

Senior Sergeant Pauline Polychrone, the Officer in Charge of Alice Springs Police Station, says: “This is a new initiate for our Youth Engagement Police Officers and Community Engagement Team to work with the town camps and other agencies and engage youth to encourage them to participate in healthy and safe activities.

“The activities also provide an opportunity to discuss with parents how to keep their children safe and talk about a range of issues including youth related alcohol and volatiles substance abuse, antisocial and criminal behaviour.”

When asked about the cuts to youth programs and services Mr Warrior said: “We do what we can. Something is better than nothing.”

A youth worker from Tangentyere Council agrees and says that they are doing the best they can with limited funding – but “there are kids who are missing out.”

Mr Day worries that those missing out are the most vulnerable and says, in this regard, the government is taking a more punitive rather than preventative approach.

Police allege the six youths unlawfully entered a licensed premises in Desert Springs at around 11:30pm on Monday.

Police attended the scene and allege several youths threw rocks and bricks at the officers before fleeing the scene. Police allege the offenders stole around $500 worth of alcohol and caused around $5,000 worth of damage.

Police arrested six youths aged 14, 16, 17 and three 15-year-olds.  The youths were charged with 41 offences including: Aggravated unlawful entry of a building (x 9); aggravated unlawful use of a motor vehicle; unlawful use of a motor vehicle; stealing (x 9); damage to property (x 12); escape from lawful custody; mesne warrant (x 2); warrant of apprehension (x 5); breach of bail.

The three 15-year-olds and a 16-year-old were remanded in custody and will appear in Alice Springs Youth Justice Court today.

The 14 and 17-year-old were bailed and will appear in court at a later date.