Cattle sale cancelled – but the show goes on 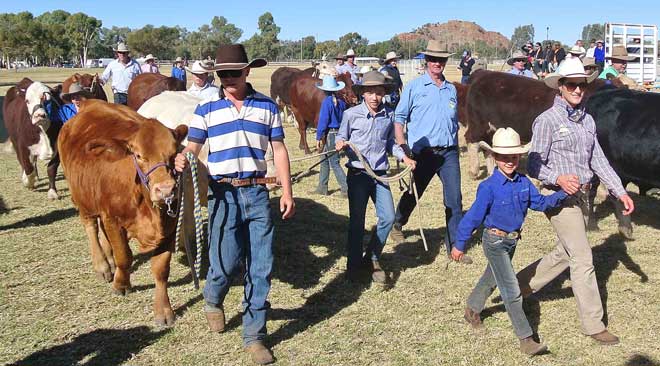 The annual cattle sale at the Alice Springs Show was cancelled this year for only the second time in 20 years – but judging by the crowd at the bull auctions today, cattlemen and women are not disheartened. 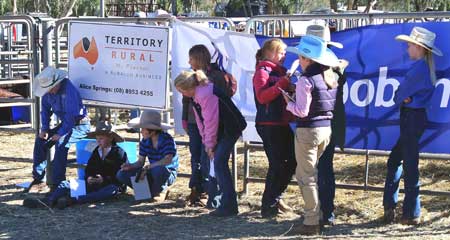 In previous years the Alice Springs cattle sale for would sell 2000-3000 cows to predominantly interstate buyers.

“Times have been tough,” says today’s auctioneer Peter Brazier from GDL Rural: “Folk have copped a few punches, but you learn to go with the flow.”

Droughts have been the main culprit, with cattle stations wary of taking on more stock. Pip and Scott Hann from Bellata (in north-west NSW) explain that droughts are a double-edged sword: they are making it harder to sell cattle and harder to maintain livestock.

As a consequence, the slaughterhouses have been filled to the brim and pastoralists are waiting as long as three months to move their cattle. During this time, stock has to be kept at a premium to ensure a quality product for butchers or supermarkets. With limited water supply in drought-stricken areas, this is a challenge.

Australia is one of the world’s largest exporters of beef, with a worldwide reputation for a quality product. Mr Bowen says the international marketplace is good with record exports to China, Japan, Indonesia and South Korea. 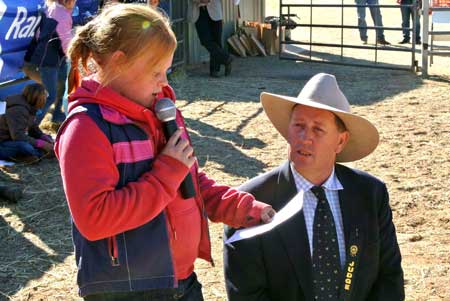 Domestic demand for beef is as strong as ever, says Herbie Neville, Elders’ branch manager, but the industry is changing – another reason the cattle sale was cancelled this year.

Perhaps all this is why the crowd at Alice Springs bull sale didn’t seem too fazed. This year buyers’ registrations hit a record of 103 with 18 interstate vendors.

Of the 44 bulls, 43 sold, with agent Herbie Neville making 15 purchases for two buyers.

“The quality of the stock on show was high,” he says, and everyone walked away with a reasonable price.

Local Nicole Hayes, from Undoolya Station, also made four purchases, saying she is always impressed by the quality.

The times may be challenging, but for those at today’s bull auction it’s “chin up” and on with the show.

Meanwhile, Scott Hann, this year’s esteemed judge, is passionate about training up the next generation of cowboys and girls: “I have been deeply impressed by the skills and enthusiasm of the kids.”

PHOTOS (from top) • Cattle and handlers in the grand parade. • Some of the junior judges of bulls. • Elise Llewellyn from Keith, SA, with cattle judge Scott Hann.  This is what she said: “I put [bull] B in the first place because he has lots of strong muscles, good testicles, and has lots of meat on his ribs. I put A second because he has nice feet and a lovely backbone but not as strong muscles. I put C in third place because he hasn’t got as much muscle on his body. He has got lovely feet and backbone. Thank you.” • The bulls being judged by the juniors.