Maralinga on their minds

Above: The prize-winning Fallout #56 – Maralinga by Catherine Rogers (the supplied image came minus the work’s narrow central portion).

An invisible catastrophe haunts the winning work in the 38th Alice Prize, which opened on Friday night at the Araluen Arts Centre. In Fallout #56 – Maralinga, photographs by Catherine Rogers from New South Wales, a narrow strip of sun-emblazoned sky separates images of two abandoned rooms. These, we assume on the basis of the title, are at Maralinga in South Australia, site of British nuclear tests between 1956 and 1963. Rogers’ observations of the desolate signs of human passage at the site sharply raise questions of legacy and responsibility, concerns echoed in works by a number of other artists in the exhibition. 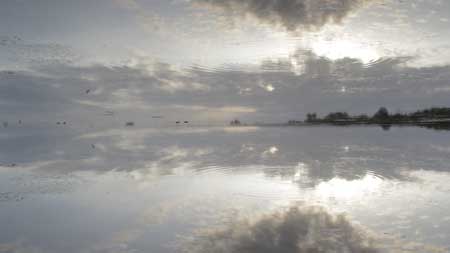 Merilyn Fairskye, also from NSW and a past Alice Prize winner, alludes to the same era and issues in her HD video Long life (1), juxtaposing a soundtrack of the radio signals received from Sputnik 1 – the Russian satellite launched in 1957 that triggered the Space Race – with sublime footage of flooding waterways at the Ranger One uranium mine site in Kakadu National Park (the history of this mine has been dogged by controversy over contamination of this World Heritage area). I was deeply absorbed by the sensory experience of this work (still image above) and it remains with me, but its ideas – which utterly transform perceptions of its celestial beauty – rely more on explication than Rogers’ prize-winner.

A work on canvas titled Operation mosaic by Kate Downhill, from NSW although British-born, again has its roots in the nuclear tests at Maralinga. This is a less sophisticated work, assembling a patchwork of emblems and textual references from the era, but its decoding by the artist in a floor talk on Saturday was riveting. Downhill’s father was one of the British scientists involved in the tests. In the aftermath, when he returned to Britain, he withdrew from his family, cutting contact completely. Downhill did not hear of him again until years later when police asked her to identify the body of a tramp whom they believed to be her father. He had in his pockets three passports and a star map of the central Australian skies. The story has a poignancy and power not achieved by the work but as she told it, it put flesh and long shadows on one of the ghosts we sense in Rogers’ astute composition. 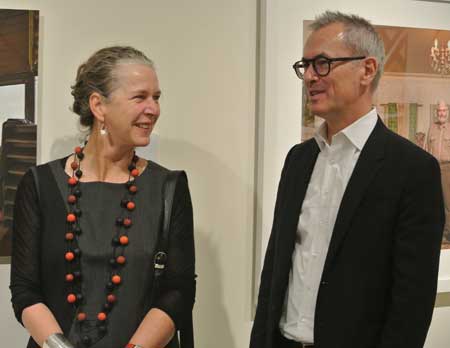 What have people done here? What were they thinking? Where did they go? These are the questions lingering in Rogers’ abandoned rooms, in the fan on the desk, the wastepaper basket, empty shelving, moulded plastic chair, kettle, the packaging for a light bulb lying on the floor, the faded print of an alpine landscape – ironically, an idealised image of pristine nature – leaning against the wall, above it an odd list scrawled with marker pen: “2 x clothes line, 40 l drinking water, 2 x bundle star pickets”.

Just a hint of scrub is visible through the windows on the right; it looks like termite activity is resuming near the doorjamb; and Rogers gives us that narrow glimpse of the awesome power of the sun, so recklessly imitated by the tests. The world hasn’t ended but we can be certain that it has changed.

Prize judge Michael Brand, director of the Art Gallery of New South Wales (above right with Ruth Elvin, president of the Alice Springs Art Foundation) praised Fallout #56 – Maralinga  as a “powerful work of art with a very subtle political voice overlaying a strong and tight composition”, the artist exhibiting “technical mastery of all stages of the photographic process as she explores the aesthetic and political nature of our landscape”.

The specifics of nuclear fallout aside, questions of legacy and responsibility, of the relationship between humankind and the environment, linger in many of the works treating landscape. They are the enduring underpinning, of course, of much Aboriginal art, of which  Dr Brand singled out Johnny Yungut Tjupurrula’s untitled work (below left) for commendation.

Two other works on this theme stood out for me. One is the oil on board triptych by Jennifer Taylor (Alice Springs, NT), Lost landscapes; the other is the digital photographic diptych by Rowan Conroy (NSW), The Lookdown, Bungonia after Fan K’uan (above). Both show mountains, their making and unmaking. Conroy’s are being dug out by a quarry, while Taylor observes processes occurring much more subtly, all too easily ignored unless we bring our minds to bear on them. These are our deep-seated responses to what is beautiful, what is to be valued and protected, what looks to be immune and unchanging but is in fact vulnerable, what looks to be empty but is in fact inhabited and has history.

The hang of the exhibition is particularly successful around these two works, with Araluen curator Stephen Williamson setting up dynamic connections between them and neighbouring Aboriginal works, both abstract and representational, with segues to other fine work responding to the natural environment. He then brings this meditative passage to an abrupt halt with Longing for December 28th by Jason Wing, a NSW artist of Chinese and Aboriginal heritage. His installation is about the removal of Aboriginal children from their families, the 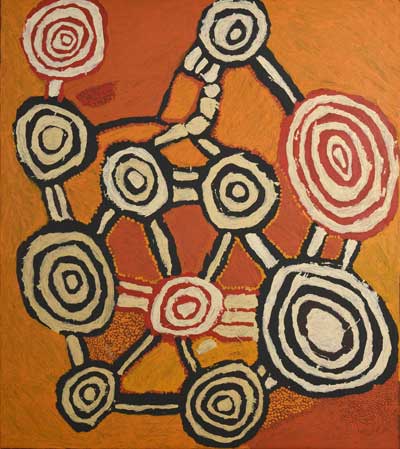 date in the title referring to the one day of the year when parents were allowed to visit their children at the Native Institute, established in Blacktown, Sydney in the 1820s.  Although this work, for its own qualities, might best be seen in a larger, darkened space with specifically designed lighting, its setting here helps make the point of the inter-connectedness of people and country, and the damage done when the connections are broken.

Dr Brand congratulated Williamson on the hang, for the attention it paid to each work, giving all a fair chance of winning. It also orchestrates incredibly diverse work – the prize sets no limits on media or theme – into a kind of guided journey across two rooms: a note struck here, by form, line, colour, motif, ideas, will have an echo there and so draw you on, to look and think.

In announcing the winning work on Friday Dr Brand emphasised its reward for close viewing. For him “there is not much more that a work of art can do than to encourage you to look and think more deeply about it”. The same can be said for the exhibition as a whole: it rewards the visit and for that we can thank not only the participating artists, but also the work of the Alice Springs Art Foundation, much of it relying upon volunteer effort and talent, and the work of Williamson and Araluen.

Of Johnny Yungut Tjupurrula, the senior Pintupi artist, Dr Brand said he is “still at the peak of his game”, describing his work in the exhibition as “fantastic”, reminding “us all why Alice Springs and this region are so important to all of us in Australia and internationally”.

Three other works were commended by Dr Brand:

• Rabie (right), by Gunjan Aylawadi, an Indian-born artist from NSW, who works with hand cut and curled paper. An interpretation of Spring, it 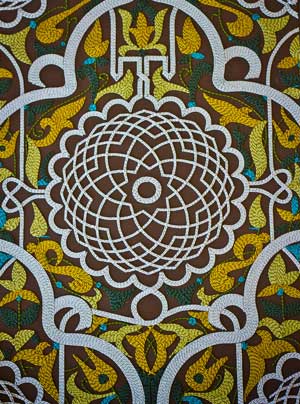 brings to mind the exquisite architectural decoration of Indian tradition, an area of personal interest for Dr Brand. He described it as a “tour de force” by an artist “with a passion for the qualities of paper”, very successfully drawing on historical imagery and refiguring it, a difficult challenge.

• Indefinite pause by Lucas Davidson, also from NSW. His intriguing video (10 minutes) shows the image of a man in constant and changing dissolution. This has been achieved by separating the photographic emulsion from its acetate base, and floating it in water. Dr Brand described the work as “strangely ethereal”. He appreciated its exploration of photographic and video media. He said he has a “love-hate” relationship with works in the medium, which are “sometimes fantastic, sometimes vacuous” but this work really uses the video format “to very good ends”.

• Make believe by Bonnie Lane, from Victoria. This is also a video (one hour and five minutes) which disassembles a body, kaleidoscopically. Dr Brand described it as “very watchable” and “gently mesmerizing” while done with “great technical prowess”; he appreciated its “blending of representation and abstraction, of human presence and technology”.