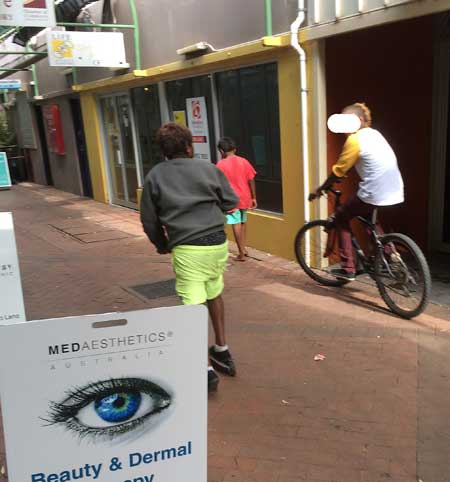 An Alice Springs local says he is concerned about antisocial behaviour by juveniles in Todd Mall.

Chris Kneebone says on Friday, the Red Cross Shop “was being hassled by young kids. They tried to break into the till and spat at the lady.

“On Monday they hit a person at the Gem Cave. Tuesday, they harassed staff in Femme Fatale Beauty and today they broke windows at the Lolly Shop.”

Mr Kneebone provided a photo of youngsters alleged to have assaulted the lady in the Red Cross shop.

“Why can’t police do something to stop the crime? I am scared for my daughter who works there and would hate anything to happen to her. What can we do?” asked Mr Kneebone.

Tracy Bishop, the manager of the Red Cross store, says it had been targeted by the youngster four times in the past week. She had told the police, Ms Bishop says.

It appeared the kids were high on petrol, “huffing” and “totally aggressive”, one of them making stabbing motions.

Police had told her they had picked up the youngster but soon after they were back.

Meanwhile Opposition Leader Delia Lawrie says rising levels of violence and antisocial behaviour in Alice Springs “shows the CLP Government’s failure to deal with the real issues in the community.

“To have shop owners attacked in the Mall and police say they are too busy to attend shows how Chief Minister Adam Giles’ failure to live up to his promises is hurting Alice Springs,” Ms Lawrie said.

“In January he said Alice Springs was ‘completely cleaned up’ and crime wasn’t an issue. Just a few months later we are hearing about youths running amok in the CBD, vandalising property, throwing rocks and assaulting workers.

“The CLP Government shut down services that were working to reduce youth-related crime and antisocial behaviour and now Alice Springs is paying the price for their short sighted decisions” says Ms Lawrie.

“We have seen funding cut from youth after hours services, forcing them to close. The Youth Street Outreach Service has been pulled, which was making a big difference in getting kids off the streets at night.

“Mr Giles closed down the Alice Springs Youth Hub that was a providing an important co-ordination point and place for young people in the CBD.

“He promised a police call centre for Alice Springs but backflipped on this very quickly. He promised extra police on the beat but all we have is police standing outside bottle shops because of the CLP Government’s failure to deal with alcohol related crime.”