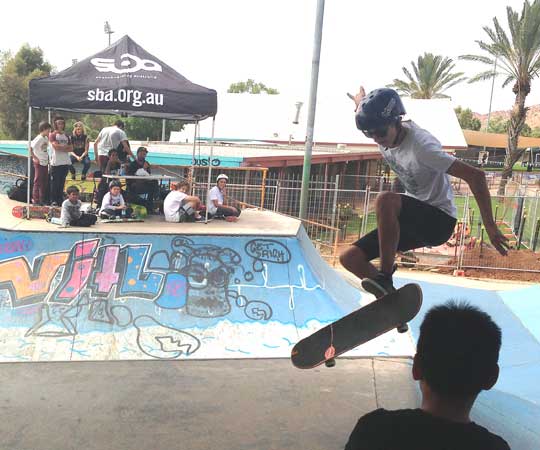 This is Dakota performing a “boneless hand varial” at the Alice Springs Skateboarding Titles: The skill of some skaters is exceeded only by the quirkiness of the names they give to their tricks.

Matty Day, the local representative of Skateboarding Australia, which hosted the event, says 30 competitors vied for three titles: 11 and under won by James Whitby; 15 & under by Joe Hurley and open by Rowley Hill.

It’s the first time that titles were held here although Alice previously had many competitions, skate jams and best trick contests.

Whitby, aged 9, turned up without a skateboard, borrowed one and a helmet, and received a brand new skateboard as the prize for winning his category.

Later the Aboriginal boy eloquently thanked the older boys in the local skateboarding fraternity for looking after him and teaching him tricks, says Day.

The event was sponsored by Nike SB and the Valour Skate Shop in Alice Springs.

Skater Logan Williams, who suffered two broken legs in the recent car accident near Glen Helen, took himself from the hospital to the skate park in a wheelchair and assisted Day in the judging.

“He is in great spirits and wanted to be part of the titles,” says Day.