Above: Abbott’s Camp and the Todd River (Triptych) by Sally Mulda.

This is us, this is the way it is – that’s what Sally Mulda’s paintings of town camp life seem to say. Grog scenes abound and when I visit Tangentyere Artists studio where she paints, she is working on one, putting it aside, taking it up again. It shows a paddy wagon in the river and two policemen pouring out grog; an assortment of bottles and green cans lie on the ground; four disconsolate Aboriginal people, probably men, walk away. 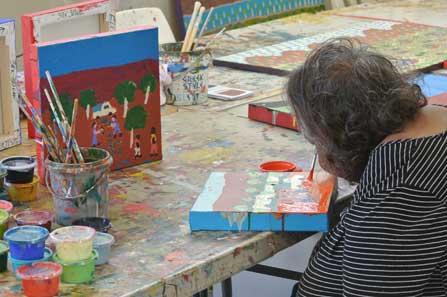 She alternates her work on it with another scene, that may be the ‘before’ or ‘after’. A kind of storyboarding is her practice. This scene shows Aboriginal figures, again four, walking in the river with a paddy wagon driving by. These two canvasses are sunlit but often the grog scenes take place at night, with the beams of headlights – from cop cars and camp cars – cutting through the darkness.

Police aren’t always present, nor is grog. With the same kind of steady observation Mulda (right) shows the scenes of everyday sociability, sometimes captioning them on the canvas or board with simple texts. In the art centre’s handsome gallery – which opened late last year – a large painting shows and captions  “three women playing card for money. two men talking story.” In the same scene a woman cooks kangaroo tails for her husband and three grandsons, another woman is making necklaces, a mother encourages her toddler to walk. “Mother said come on / baby walking to her,” notes Mulda.

She is one of six artists from the art centre to submit entries for the Telstra National Aboriginal and Torres Strait Islander Art Award (NATSIAA). Her documentary style of practice is shared by four others although their focus is different.

Louise Daniels at 36 is the youngest of them and is also an art worker at the art centre. She has gone from painting designs on small objects for sale to rendering quite ambitious narratives. Her earlier practice in pattern and design is apparent in the work I see but she is also revealed as a good social observer. She has painted a series of sports scenes, taking in horse-racing and cricket as well AFL (see bottom). While the footy game is an all-Aboriginal affair – the faces unmistakeably black – she emphasises the mixed race character of the cricket match, and while the arrangement of players across the field governs the composition of these two, the more animated racing scene is organised by the movement of horses and riders around the track. 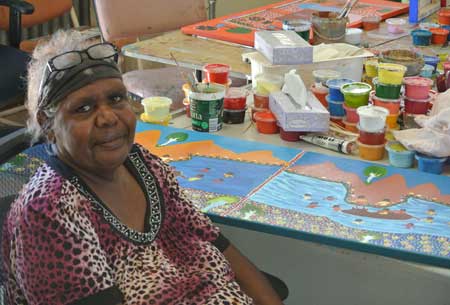 Scenes of life out bush, particularly those recalled from childhood, are the focus for the entries by Margaret Boko (left), Grace Robinya and Rhonda Napanangka. Buffalo make their surprising appearance in both Boko’s and Robinya’s scenes. Boko remembers a favourite from her childhood, “Nicky”, and a canvas she has just finished shows children on Nicky’s back, swimming in the fast-flowing Finke at Glen Helen Station  – “my father’s country”.

Napanangka recalls trips she has made with her children to Aileron Station. In a homage to Aboriginal mobility, she shows a cavalcade of vehicles on the highway, full of smiling faces, loaded with swags and eskies, and once arrived, more happy faces, riding horses, getting out into the bush. Trees and grasses rhythmically dot the countryside, clouds do the same across the sky, the dam is full of water, all coming joyfully together.

Surrounded by artists practising this kind of literal representation, Emma Daniels persists with her own thing. Of venerable age, she nonetheless turns up each morning, already waiting when studio facilitator Chris Barry arrives. She says she’s come “to work” and work she does, painting her vivid stories of Karinyarra (Central Mount Wedge) – her father’s country for which she knows “all those songs”. She uses a traditional iconography, laying it out with an impressive dynamism and an adventurous sense of colour (see below right). 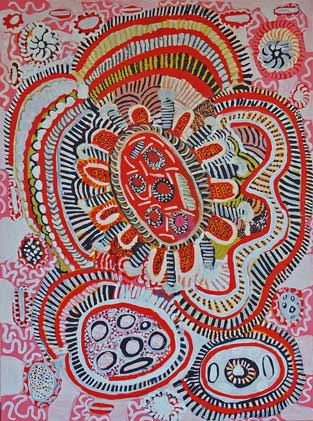 After many years at the helm and shepherding Tangentyere Artists to where it is now, with a large well-equipped studio and gallery, coordinator Liesl Rockchild has moved on. Joanna Byrne, previously at Tjungu Palya and Tjala Arts on the APY Lands, is the new coordinator. For the first time, the art centre also has a full-time studio facilitator, with the position sponsored by philanthropist Pam Usher.

When I visit the studio there is an air of quiet industry but numbers are admittedly low, even if the artists themselves are quite prolific. The challenge for Byrne, she says, is to get out into the camps and revive the residents’ interest and commitment, to work out how best to benefit and inspire them, particularly younger people.

She is also working with the other town-based Aboriginal art centres – Tjanpi Desert Weavers, Ngurratjuta Iltja Ntjarra (Many Hands) and Yarrenyty Arltere Artists (Larapinta Valley) – to look at how they can work together to maximize their visibility.

In the meantime, a new body of work from Tangentyere Artists has been hung in the gallery at 16 Fogarty Street  which will be open for extended hours this coming Friday (8.30am to 7pm) for a one day sale. If you miss it, the gallery can still be visited Monday to Friday, 10am-4pm.