The big dollars of oil and gas in The Centre 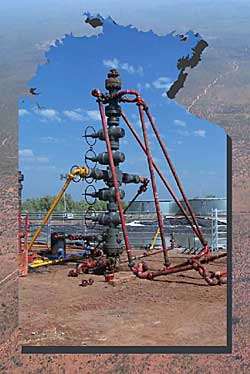 There is a lot of oil and gas in Central Australia, so much is clear, but there is usually a massive gap between proven reserves, “where the oil or gas resources have been demonstrated by drilling, and prospective resources, which are undiscovered resources interpreted by industry to exist on the basis of known geology, but which are not demonstrated”.

So says Ian Scrimgeour, Executive Director, NT Geological Survey: “These undiscovered resources are widely quoted but are unlikely to be much larger than the resources that are economically recoverable, and need to be treated with caution.”

At the moment the most thoroughly explored basin is Amadeus, south and west of Alice Springs.

Resources are quoted in millions of barrels for oil, and billions of standard cubic feet for gas which is roughly the equivalent of the energy measure petajoule (PJ).

Mr Scrimgeour says undiscovered prospective resources for the Amadeus basin, “yet to be fully proven,” have been estimated by industry to be in the order of 27 trillion cubic feet of gas. That would be worth a staggering $21600 billion.

But Mr Scrimgeour says that includes unconventional or shale gas, which is not yet demonstrated to be viable in the basin, and may require fracking if it was to be extracted.

Industry is not currently exploring for shale gas in the basin and it is unknown how much of this shale gas may be recoverable, if any.

The industry projection for unconventional oil from oil shale is about 21 billion barrels. At the one year forecast price of $112 a barrel that’s worth $2352 billion.

The numbers for proven “contingent” reserves – that is conventional resources that have been defined through drilling – are a lot more sober: for oil in the Amadeus basin it is in the order of 15 million (not billion) barrels – 1400 times less than the  prospective resource for shale-hosted oil, giving it a value of $1680 million (not billion) – still an amount not to be sneeze at.

The equivalent for gas is 158 billion cubic feet – or a 170th of the industry projection.

In the Amadeus basin, the area south of Alice Springs is mainly prospective for gas, whereas further west at Mereenie there is both oil and gas, and further west, at the new Surprise field being opened up by Central Petroleum, the hydrocarbons are entirely oil.

Across the five oil and gas basins in the central Australia region, the Amadeus, the Georgina, the Warburton, Pedirka and Eromanga, the Ngalia and the Wiso Basins, both oil and gas occur.

At present all resources that are being, or are proposed to be produced, are extracted by conventional methods, usually piped to the surface aided by pressure underground.

The controversial fracking is not being used for oil and gas exploration in the Amadeus Basin, at least not in the near future, although it is possible that some “unconventional” gas reserves in The Centre cannot be accessed without it, says Mr Scrimgeour.

The Wiso basin has no known resource estimates – it is a “completely frontier basin”.

Exploration of the Georgina basin is still at a very early stage. There are no reliable estimates but there is an industry estimate just for oil in shales within the Georgina Basin – Georgina is mostly seen as an oil basin – in the order of 1.1 billion barrels.

There has not been enough drilling yet to define a proven reserve in the Georgina.

There are no government estimates for any of these basins at this stage. The only resource estimate for the combined Warburton, Pedirka and Eromanga basins is six billion barrels of oil, and there are no reliable gas estimates.

How close are we to pr 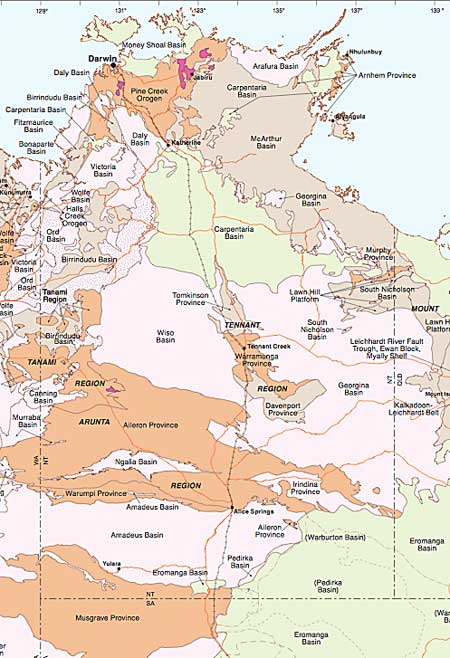 Surprise should go into production any time. The only other field close enough for an estimate is the small Dingo gas field south of Alice Springs which has just had a production licence granted.

Central Petroleum are looking at a pipeline from the Dingo field to Alice Springs, and are a likely to be in production within a couple of years.

That gas is likely to be for domestic or industrial supply in the NT – possibly utilising the Alice to Darwin pipeline. There are no external markets at the moment, says Mr Scrimgeour.

The oil from Mereenie and Surprise will go overseas and refined offshore.

They are pressured, conventional petroleum resources – just a case of drilling wells and the gas and oil will be naturally flowing out, as in Mereenie and Palm Valley.

“It’s not appropriate for me to speculate what companies may do further down the track,” says Mr Scrimgeour.

He says in the Amadeus basin there is very high potential for a lot more to be found in terms of conventional resources.

Santos have shot over 1500 kilometres of seismic last year – all targeting these conventional plays right across the Amadeus Basin. There is a very good likelihood that we will see more conventional oil and gas discoveries over the next few years.

“That’s what I expect to be the main focus in the Amadeus Basin in the next few years,” says Mr Scrimgeour.

It’s too early to say what will be developed in the Centre’s other basins, as exploration remains at a very early stage.

Five vertical wells are planned to be drilled in the Georgina Basin next year will give a guide to future extraction programs, and that’s primarily targeting oil. There is no fracking involved in those five holes.

IMAGES from the NT Government report “Geology and Mineral Resources of the Northern Territory” launched at the 15th Annual Geoscience Exploration Seminar attended by more than 200 delegates in Alice Springs this week. The oil and gas basins referred to in this report are named on the map.