Rift deepens between Melky and the rest

With her election as Deputy Mayor last night not yet four months in the job, Councillor Kylie Bonanni’s honeymoon continued alongside the excruciating spectacle of Cr Eli Melky’s increasing and mostly self-driven isolation.

Cr Melky signalled early at last night’s committee meeting that he would be raising breaches of the Local Government Act in General Business. No prizes for guessing that it would concern the leak to the Alice Springs News Online that he had threatened a fellow councillor with legal action in confidential sessions of council.

General Business is scheduled at the end of the relevant committee meeting, so before Cr Melky could proceed other business had to be got out of the way. This included the election of Deputy Mayor and the various committee chairs and members. It was an opportunity to observe alliances in action, as well as the interests and energies of various councillors. 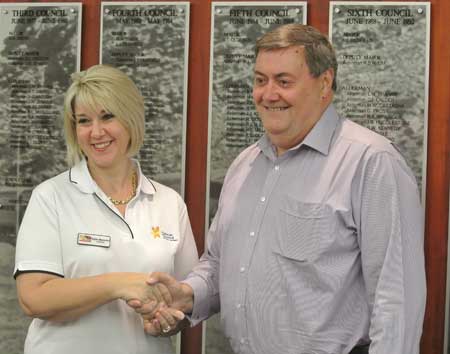 Cr Bonanni was nominated for Deputy Mayor by Cr Steve Brown, seconded Cr Brendan Heenan; she expressed her surprise but was clearly delighted. The role mainly involves standing in for the Mayor at various committees and functions when he is unable to attend. This is reasonably often as the Mayor is involved in a number of Territory-wide roles on the Local Government Association NT, the NT Grants Commission, and Regional Development Australia NT. The deputy’s job will thus be a significant boost to Cr Bonanni’s profile.

She was elected by secret ballot after Cr Melky nominated Cr Chansey Paech, seconded Cr Jade Kudrenko. Cr Melky had earlier moved to change council policy and have an open ballot. Cr Paech seconded his motion but there was no other support.

A show of hands would settle the committee elections if necessary. Some committees are internal to council; some are external, on which council has representatives. There were 28 to fill last night.

Crs Heenan, Kudrenko and Paech were unopposed to chair council’s standing committees – Finance, Corporate and Community Services, and Technical Services respectively. Most councillors then proceeded to take on a variety of other committee roles, self-nominating or accepting the nominations of their fellows.

Crs Kudrenko and Paech showed their keenness in taking on roles in youth, arts, environment and Indigenous affairs-related committees and on my reckoning will have the busiest committee schedules of any councillors bar the Mayor.

In contrast, 10 committees were taken care of before Cr Melky was nominated by Mayor Ryan for council’s Sports Facilities Advisory Committee. He declined, without explanation.

Mayor Ryan tried again for the Cemeteries Advisory Committee. Cr Melky appeared affronted: “I’m not going to do cemeteries, I’m sorry,” he said. It was not a good look, and he was shown up seconds later by Cr Bonanni who said she would be “happy” to do it, joining Crs Paech, Martin and Heenan.

Cr Melky self-nominated for the Town Council and Tangentyere Council steering committee, joining Crs Kudrenko and Paech, with all three also accepting to be on the Town Council and Lhere Artepe partnership committee. Mayor Ryan also sits on both (not that a great deal has emerged from either to date as it has been hard to even get meetings to happen).

Cr Melky went on to decline a nomination for Tourism Central Australia but did self-nominate as a Local Government Association of the NT representative, joining Cr Paech.

Committees settled, the next significant item of business was one which Cr Melky has driven, to do with what he has seen as an anomaly in one of the Management of Public Places By-laws. This has to do with the pouring out of liquor from opened containers in a public place.

Cr Melky has argued that rangers are acting beyond their powers when they empty not only an open can of beer, for example, but as well all the closed cans from a carton. He has argued that a carton does not meet the definition of “container” in the by-laws. Council’s solicitor Chris Turner, in a written report, acknowledged “some force” to Cr Melky’s argument but did not agree that rangers would incur criminal liability in continuing to carry out the by-law enforcement as they have to date. This advice carried the proviso that Mr Turner is not a criminal lawyer.

For Cr Melky that proviso was enough to take Mr Turner’s advice as no more than a “personal comment” and he maintained his position that it is simply “wrong” to tip out liquor from unopened containers. He found an ally in Cr Kudrenko, who also saw it as a matter of principle – “morally not the right thing to do”. She wanted to see rangers acknowledging people’s “common decency”, giving them “respect that they will make the right choice”. Cr Paech was of a similar view.

Mayor Ryan pointed out the very small number of incidents involved: 17 standard drinks for January and February in 2014; a total of 304 for all of 2013, with half of those in the month of November. Cr Kudrenko rejected this reasoning: it was “not a question of numbers”, but rather one of “where council stands” in relation to a complex issue.

Crs Heenan and Martin saw it in more pragmatic terms: Cr Heenan wanted to limit the burden on rangers, foreseeing the need for them to return again and again to empty open cans if the open cartons were not dealt with; Cr Martin evoked the “horrific” levels of drinking and violence around town, coming down on the side of the people at risk of harm – better to pour the liquor out. However, she also said that in Canada, where similar practices occur, the unopened alcohol is impounded, to be retrieved later. (This had been tried in the past here, director Craig Catchlove informed councillors, but it made council premises vulnerable to break-in.)

Arguing his case, Cr Melky became more heated. He was not shouting but was not far off it when he described as “immoral, abhorrent and illegal” the instruction to rangers to commit an offence, apparently willed by Crs Heenan and Martin. His decibel level was lower but his arguments more hysterical when he countered Cr Brown’s use of the word “ridiculous” to describe the idea that a court would convict a ranger of such an offence.

Cr Melky seemed to think opposition to his views had something to do with a challenge to his understanding of the language of the legislation, defending himself as a speaker of English as a second language and going so far as to say there’s “no reason for racial vilification”. At this point he was shut down by Cr Dave Douglas in the chair.

His ally in argument, Cr Kudrenko, was now “uncomfortable” with the level of discussion and asked Cr Melky to respect the views of others. After more to-ing and fro-ing a vote was finally taken, not on changing the by-law but on simply giving rangers a direction to not pour out liquor from unopened cans. The motion was lost, supported only by Crs Melky, Kudrenko and Paech.

Finally came the time for Cr Melky’s discussion of breaches of the Local Government Act. He read out the sections that he considered breached by an “improper disclosure” and “improper use” of information from the confidential session of council, dwelling on the penalties and commenting , “a long time in gaol”.

Sure enough, the matter involved the report on this site concerning heated exchanges at two confidential sessions in which Cr Eli Melky was said by unnamed sources to have threatened a fellow Councillor with legal action, without having any reasonable cause to do so. This had been very unsettling for the Councillor concerned, according to the report.

Cr Melky read out the email from Alice Springs News Online editor Erwin Chlanda indicating the content of the report (still in draft form) and inviting Cr Melky to comment. Cr Melky also read out his own reply, which was subsequently quoted in full in the report.

His time to get support for speaking further on the issue was up, but Cr Paech seconded him in taking the matter further. Mayor Ryan said that “procedurally” it should be heard in the confidential session. However, Cr Melky argued that the matter was out in the open, being online. He asserted that he had not been given a right of reply, despite having already read out the email offering him one, and he now wanted this opportunity to respond openly. He said the breaches were bringing the entire council into disrepute as clearly the information in the Alice News had come from someone in the chamber.

CEO Rex Mooney said that on the face of it there appeared to have been a breach of the Act, which brings with it serious penalties, but he insisted that it needed to be discussed in the confidential session, “notwithstanding that the article appeared online”.

Cr Melky then provided notice that he would be giving the CEO an affidavit and letter requesting disciplinary action and naming names. He said that he would not participate in any discussion of the matter in the confidential session as it seems there are “no rules on confidential when it comes to this”.

The Alice News has asked Mr Mooney whether Cr Melky’s request for disciplinary action will proceed. We will advise when a reply is to hand.