The canvas of history

Above: It’s as if the artist Joan Brassil (1919-2005), the subject of Iain Campbell’s 1993 portrait, is eye-balling Homer Coderre’s Study of Antonia, 1995. Campbell, in the foreground, reminded us that an installation by Brassil can be seen in the sculpture courtyard at Araluen. Of his own vivid portrait, he said he was happy with the work as “Joan liked it”.

The home of the Central Australian Art Society (CAAS) is a relatively humble tin shed in Crispe Street in the industrial area of Alice Springs. Over the last fortnight it has brought 50 years of history into its fold: on the walls, some of the key works the society has acquired for public collection; behind the scenes, the keepers of the tradition, present day members of the society. 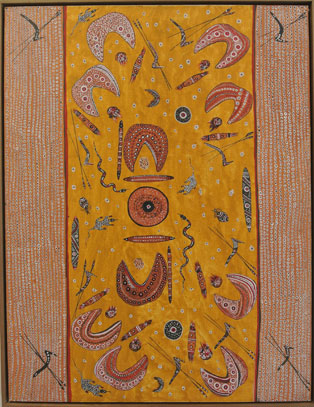 On opening night for their celebratory exhibition, The Collection, these included CAAS lifetime member, Myrtle Noske. With her sisters Mona Byrnes and Trudy Hayes, of the pioneering Johannsen family, she helped found the society in March 1963. Showing work was always a focus and for 20 years exhibition venues were improvised, sheds, halls, private homes, until their lobbying – as well as that of the Alice Springs Art Foundation and the Craft Council – led to the creation of the Araluen Centre in 1984.

From 1968 through CAAS’s annual award, then known as the Caltex Art Award (later the NT Art Award), the foundation of their collection was laid (today it is owned by the Town Council on behalf of the people of Alice Springs and housed at Araluen). Their sophistication, in inviting professionals of the art world from interstate to judge the awards, set the bar high. There was clearly a sense of central Australia and the Northern Territory having something to offer culturally that was distinct and worthy of attention at a national level.

It may have taken CAAS members by surprise, but it is nonetheless to their credit as award organisers, that in 1971 the judge they invited, Adelaide painter Jo Caddy, was on hand to recognise the emergence of something new and extraordinary, the painting movement out of Papunya in the western desert, born just a few months earlier. Caddy named Gulgardi by Kaapa Tjampitjinpa as co-winner of the award. This work is too valuable to have been included in the display at the CAAS shed but a number of other works by prominent Aboriginal artists were, demonstrating the contribution the award continued to have to this strand of the public collection. These include a 1975 work, Warlukurlangu, by Dinny Nolan Jampijinpa; Mparntwe Marleke Altyerre (Women’s Dreaming for Alice Springs), 1985, by Wenten Rubuntja (above right); and an untitled work from 1986 by Clifford Possum Tjapaltjarri. These works add enormously to the depth of the collection. The Aboriginal art movement out of the desert would go on to excite attention from around the world. Imagine if the town’s public art collection were not able to bear some witness to this. 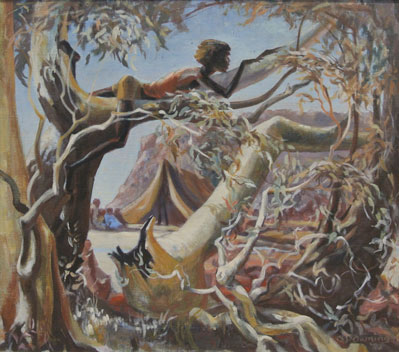 The other striking thing on display among the 30 works chosen for this exhibition was the number of fine non-Aboriginal practitioners who have worked here over the decades. For many Alice Springs was / is home and alongside their aesthetic achievements, their work also intriguingly traces something of the town’s history, its natural, social and cultural environment.
Left:  Tomorrow and Tomorrow and Tomorrow, 1977, by Shirley Downing. The setting is Todd River. What is about to unfold for this young woman?

We know too little about some of the artists, such as Ludmilla Kooznetzoff-Hawkins (Lucy Hawkins,) who should have had a national reputation as a print-maker, particularly through her etchings, according to painter Iain Campbell who spoke at an artists’ talk on Sunday.

But artistic excellence is only one of the factors that contribute to ‘successful careers’ and terrific artists can also choose, for a range of reasons, to pursue their work away from the limelight. For them, there are other rewards and in Alice Springs these no doubt include local exhibition opportunities and an engaged local audience for their work. This is another aspect of the proud achievement of the Central Australian Art Society and organisations like it. Long may their work continue!

Note: A solo exhibition by Iain Campbell, titled Reflections, will open at Araluen this coming Friday. Originally from Scotland, Campbell arrived in Alice Springs in 1975. His work over the intervening years represents a remarkable vision of the evolution of the town and of himself as an artist within it.

Below, from top: Henry Smith talking to his portrait Dick Kimber Storyteller, 2003: he captures the complete commitment to his subject of the great local raconteur. • Textile artist Philomena Hali with her printed and stitched Clan Cloth, 1998. Her ideas are her processes. • Louise Lowson with her portrait Trevor Dixon Jabaljari, 1992, a comment on neighbourhood as lived in Alice Springs. 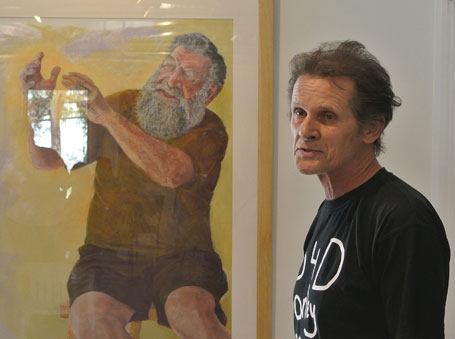 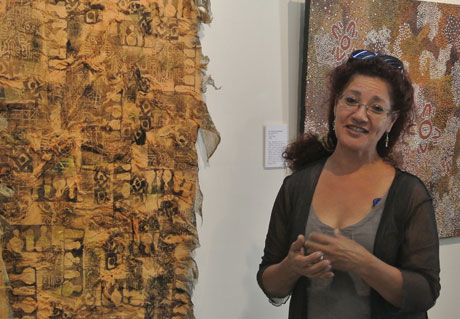 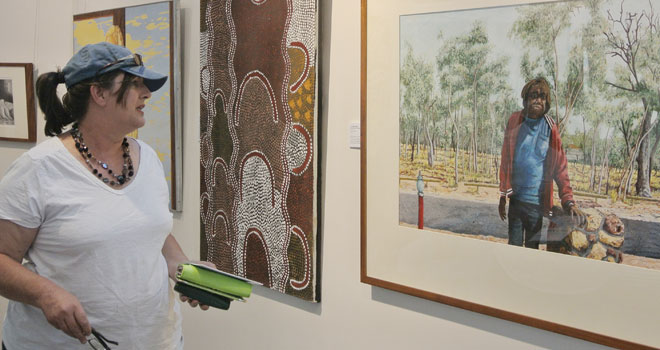 Alice has more poker machines than most

By OSCAR PERRI The Northern Territory has more than twice the number of poker machines per person than Victoria, and the figure is nearly as...
Read more
Issue 11

A night in the work of security guards

A small army of security guards in the streets, shopping centres and public buildings of Alice Springs are stemming the tide of vandalism and...
Read more
Issue 11

By OSCAR PERRI A trial of new water capturing technology is underway in Tennant Creek, with the possibility to open the door for a renewable...
Read more